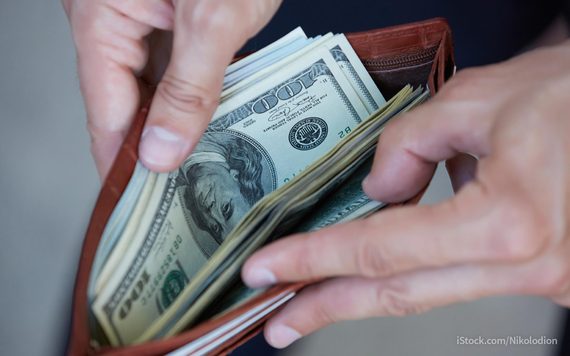 It was big news when the U.S. average hourly wage posted the biggest increase in years in October 2015. News reports proclaimed that Americans were getting a raise — finally. The amount of that raise was just 2.5 percent, according to the Bureau of Labor Statistics.

That increase reflected the growth in hourly earnings over the period of a year, from October 2014 to October 2015. However, since that 2.5 percent increase is an average, some workers have likely seen their wages grow at a faster rate, whereas some might not have seen any improvement lately.

Rather than wait for your wages to grow on their own, it’s time to take matters into your own hands. If you need more cash in 2016, there are plenty of ways to make more money.

Nearly 60 percent of workers have never negotiated for a higher salary, according to a survey by PayScale, a compensation data and software firm. However, the survey also found that the higher your salary, the more likely you are to have asked for a raise and to have received it. So if you’re not asking for more, chances are you might not get more.

The key to asking for what you want is preparation. Start by creating a list of your work accomplishments over the past year and your goals for the next several years, said Harrine Freeman, CEO and owner of financial consulting service H.E. Freeman Enterprises. Focus, in particular, on how your achievements have helped and will continue to help the company reach its goals and improve its bottom line. Give the list to your supervisor, then schedule a meeting to discuss it and your salary, Freeman said.

Also prepare yourself before asking for a raise by knowing what you’re worth. Websites such as PayScale.com and Salary.com can help you see what others in similar positions are earning. However, you shouldn’t state a number when negotiating for higher pay, according to PayScale. Wait for the employer to suggest an amount, then ask for a little more, because the employer likely won’t offer the upper bound of what they’re authorized to pay.

2. Change Jobs to Boost Your Pay

You might be able to get a bigger pay raise by leaving your company for another one that will pay you more. Employees who stick with the same company for more than two years earn 50 percent less, on average, over their lifetime, according to Forbes. That’s because the average pay raise is 3 percent, but the average salary increase employees get when switching jobs is between 10 percent and 20 percent.

You can use websites such as Hired.com, Monster.com or CareerBuilder.com to find positions, then cater your resume to each position, said Freeman. You can tap the network of people you know for job leads. You can also take steps to increase your network by joining organizations related to your field of interest, attending conferences and career events, as well as doing volunteer work.

3. Pursue Your Passion as a Side Business

You might not like the idea of taking on a second job to earn more by working even longer hours. However, if you build a side business doing something you care about, you’ll likely have more motivation to put in the extra hours, said Tom Corley, author of "Rich Habits: The Daily Success Habits of Wealthy Individuals."

For example, Corley said that the Wright brothers ran a bicycle business full time, but on the side they were conducting their famous experiments that eventually led to the invention of the airplane. “When you do what you love, you are somehow able to find the energy and the time to devote to your passion,” said Corley.

You don’t need an advanced degree, or even a classroom, to be a teacher. You just need to have skills that others value and that you’re willing to share. You can also do it easily online, thanks to websites such as Skillshare, said Saeed Darabi, editor of the MoneyPantry.com blog, where he shares tips on ways to make extra money.

"Simply create video courses of something that you are good at, whether it is producing PowerPoint presentations or cooking the perfect curry," said Darabi. "Whatever your strength or passion is, you can probably think of a way to teach it in a video course."

Skillshare teachers earn an average of $3,500 a year through membership fees that students pay for access to online courses, according to the site.

5. Rent Out Your Home on Airbnb

If you have a spare room in your house or apartment, or are willing to let others stay in your home when you’re not there, you can make extra cash renting out your space through Airbnb. Simply download the Airbnb app, snap a few pictures of your space, then set a price and list it for free. You pay a 3 percent service fee when you confirm a reservation.

Matt Cosgriff, a certified financial planner with Lifewise, said he has earned $200 to $600 a month by using Airbnb to rent out his apartment while he’s traveling for work. “The sharing economy can be a great way to earn an extra couple hundred dollars a month that can go a long way toward paying off student loans or saving enough for retirement,” he said.

Uber and Lyft aren’t the only ways you can make extra money in the transportation business. You can make up to $25 an hour as an urban courier with Postmates, an on-demand delivery service operating in 40 major metropolitan markets. Couriers purchase and deliver goods from restaurants and stores.

You do have to have a valid driver’s license and a smartphone to be a courier, but you don’t have to own a car. You just have to be able to make your deliveries with any form of transportation — even walking — in less than an hour.

7. Get Paid to Assist Others

If you have a flexible work schedule, or are a stay-at-home parent, you might be able to earn some extra cash as a virtual assistant. Darabi said that sites such as Zirtual and Fancy Hands connect personal assistants with people who need help with scheduling appointments, making travel arrangements and other tasks that can be completed online or by phone.

The amount you earn can vary, depending on the service you join. Fancy Hands, for example, pays $2.50 to $7 and up for tasks.

Fiverr has become a go-to site for people looking to make money by doing small tasks for $5 a pop, hence the name Fiverr. Typical tasks might include creating short articles, producing a logo or designing a cover for a Kindle book, Darabi said.

“But before you dismiss it as not worthwhile, note that many users create ‘gig extras,’ offering advanced or more comprehensive services for an additional fee,” he said. In fact, some Fiverr freelancers are selling enough gigs to earn six figures in a year, according to the New York Daily News.

Read: 10 Best Money Tips From Warren Buffett of All Time

9. Get Paid for Your Opinions

A fast, easy way to make extra cash is by taking online surveys. You can earn cash or gift cards through sites such as Harris Poll Online, SurveyClub, GlobalTestMarket and Swagbucks. There’s no cost to sign up for these groups.

If you have a little more time to spare, you can make more money participating in focus groups. For example, marketing research firm Focus Pointe Global pays focus group participants between $45 and $250. You can also visit a site such as GreenBook.org to find market research companies in your area looking for participants.

This article, How to Be Richer in 2016, originally appeared on GOBankingRates.com.