Normally I write a (hopefully) humorous blog about the most ridiculous of things. However, every now and then I feel compelled to write something more serious. Lucky for you, this is one of those times. 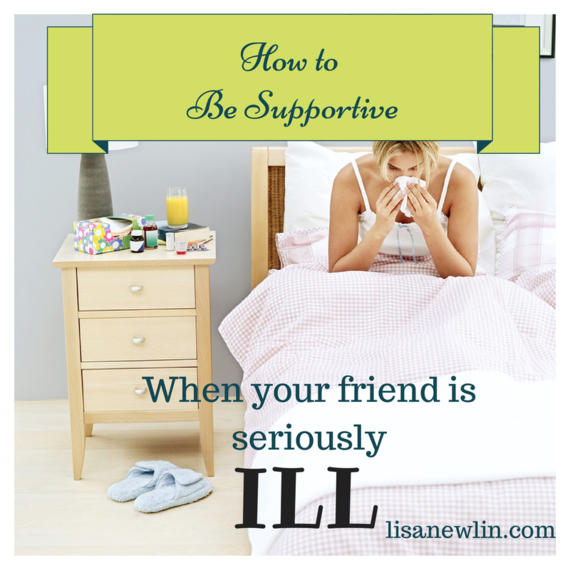 At some point in most people's lives, they have a friend who is sick. Not just the normal vomiting after a Saturday night of drinking, but something more serious. If you haven't had this happen to you, then you're lucky, although I suspect it will happen at some point in your life.

As someone who has been seriously ill, I've learned the hard way what actions by friends can help and what actions can hurt. I've decided to offer some advice on how to behave when someone you know has been diagnosed with a serious medical condition. From lupus to depression to cancer and everything in between, knowing how to act around someone who is sick is a skill many people lack.

Hopefully these tips will give you some guidance.

If you don't know what to say, simply say that, but don't ignore your friend when she needs you most. Don't let your insecurities about how to act affect how you treat your friend. She is struggling with a lot and it's selfish to put your uncomfortable feelings before those of your friend.

This happened to me and I can tell you first hand just how bad it stung. She was one of the few people I told about my diagnosis and treatment. She was supportive during the conversation and then?

This was someone I thought was a close friend and it turned out she wasn't. Either she didn't care about me or was too worried about herself to continue our friendship. The reason doesn't matter. The end result is the same. It hurts the person who is sick and who is already hurting so much.

Some people are open about medical struggles and diagnoses but some aren't. Remember that although you want to know what's going on, it isn't your story. It's your friend's and if she doesn't want it told, then respect that.

There are many different people in this world and it's not fair to judge others based upon what we think we would do if diagnosed with an illness. Allow me to tell you this: you don't know what you would do. No one does until it happens to them, so don't judge your friend for how she responds.

If your friend doesn't want to give details, then respect it. She has a reason, and it might just be because she doesn't want to lose friendships by disclosing too much.

Or maybe it's another reason entirely.

The bottom line is that it's not your place to push. Respect your friend's wishes and ask what you can do to help, but don't pry.

Let Your Friend Know You're Thinking of Her

Just because she's sick doesn't mean she's dead. She still wants to feel like people care about her and are thinking of her. A quick text that says "Thinking of you" most likely will make your friend's day. She is probably already feeling out of the loop and depressed about being sick.

Those quick little texts or calls make all the difference.

It also shows who her real friends are; and who they aren't. My two best friends were there for me every step of the way and continue to be. I'm not surprised at all that these women have been wonderful. I never doubted them, but it's nice to have reassurance.

On the other hand, there have been people I would have thought would have stepped up that didn't; people I normally would have sworn would be there for me if I needed them. That's a tough lesson to learn, especially when you're already going through a dificult time.

The only thing worse than physical pain is emotional pain, and I felt much of that traversing these last few months and realizing who my friends were (and weren't).

Your friend may not be able to go out to dinner with the girls on a Friday night, but you know what? ASK. If she can't go, she'll say so. But not being asked hurts.

It's hard enough being at home feeling horrible, going to doctors all the time and being prodded and questioned about everything. That's a struggle in itself. Couple that with feeling shut out because you're sick and it's positively horrible.

It's hard to realize life is going on without you when you're sick. When you're not included in plans, it feels like you've already been dismissed from the group. It's painful and isolating.

Always ask, even if the answer is always no.

Sometimes your friend may just want to talk about something... or nothing. Be there. Listen to her talk about horrible daytime TV and how the only thing that would make it better is a milkshake.

Listening is one of the greatest things you can do for a sick friend and it's completely free. It makes them feel relevant and that someone cares about them even though they're not able to be social. 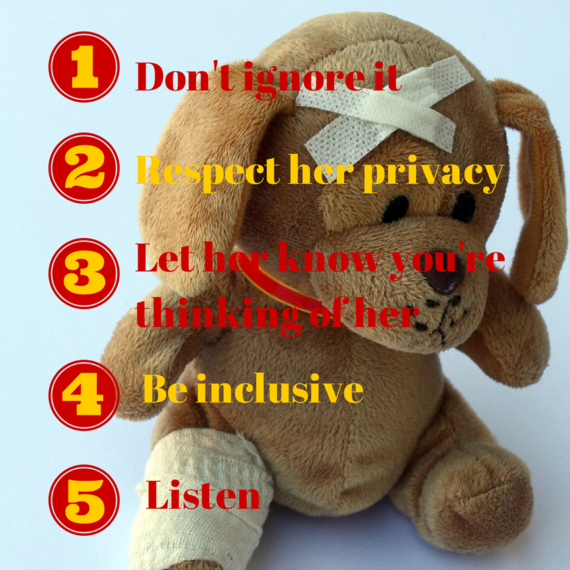 Hopefully these tips helped shed some light on things. Please remember that just because someone is sick doesn't mean they're dead. They're still here and deserve the love and support of those around them.

Think about how you would feel if people acted certain ways and monitor your behavior accordingly.