Handwringing has never been so vigorous in American politics. Call them vanity candidates, protest candidates or, heck, qualified candidates -- the likes of Donald Trump, Ben Carson and Carly Fiorina are not supposed to happen in presidential contests. But they're in the mix, and GOP fathers are worried one will be nominated. 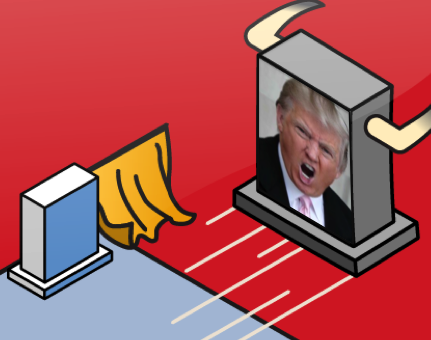 The outsiders' success has been explained by myriad theories: A failure of conventional candidates to retain an electorate's trust. A preference for entertainment over news. A politically-illiterate citizenry. A polarized press. A democratized social media. A guarantee of celebrity. Absence of a penalty for failing. And, finally, a failed Congress. For the 2016 cycle, outsiders are to be taken seriously.

Efforts to put them in their place have famously backfired, particularly against Trump. Think of former Texas governor Rick Perry who pinned his failed candidacy on a spirited and principled attack of trumpism. Despite Perry's invocations and recastings of conservatism his message was precisely what a fed-up hard-right base didn't want to hear. As examples, Mexicans as rapists and management as a catch-all solution were suddenly acceptable premises. Conservative media, even FOXNews, tried also to ease him out, but only fueled backlash and buzz.

Instead of calling out The Donald, craftier and more disciplined strategies like drafting have worked far better. Fiorina and especially Cruz have smartly surfed Trump's wake. The others have been more stubborn and parochial. Labeling the billionaire a kind of carnival barker hasn't worked; the play's been run too often. Ask Jeb Bush, Ron Paul, Chris Christie and Lindsey Graham. And, as Marco Rubio knows, ignoring him has promised irrelevance.

Trump's calculus is that his rivals over-estimate their credibility and that none (save Carly and Ted) will ever hold him up. And therein lies the answer: What Donald Trump is not expecting from detractors is to be encouraged. Just in the way that corporations are primitively loath to embrace a rival, Trump is banking on his party's collective aversion to risk and a slavish obedience to old-school influence strategy.

The encouragement theory goes like this: Since Trump can't be stopped, his progress should be accelerated. It's crazy, most will say, to give him any more stage than he's getting. But if Trump, or Carson or Fiorina for that matter, are truly unqualified to be president the answer lies in counter-intuitive play action. Instead of mocking his expansive ego, it should be flattered. Instead of protesting his prejudice, it should be ignored. Instead of criticizing incomplete policies, they should be accepted as vetted. Trump, after all, is nothing if insecure and can be massaged to play even bigger. The more we get from Donald, in other words, the quicker he sets and springs his own trap.

Most will argue that it's too late for such games, that there's no time for Donald to self-immolate before the formative Iowa, New Hampshire and South Carolina primaries. This is what John Kasich believes, so he'll commence traditional attack ads on Trump. And he will join Rick Perry at the bar.

The answer is to yield to the wisdom of the people. Do nothing to obscure their collective view of the interloper. In fact, get them closer. Really close, and for as long a look as they like. It's a high-risk play, yes. But conventional strategies haven't and won't work. Only The Donald will beat The Donald.