In the space of a fortnight, over 3.5 million people watched a YouTube clip titled Vaginal Knitting, shot by SBS2. The clip offers an overview of Jenkins' work, documenting her 28-day performance piece Casting off My Womb, where Jenkins' uses skeins of wool, lodged in her vagina to knit a long passage, marking one full menstrual cycle. Obviously this kind of art pulls people one of two ways -- you either hate it or you love it. For me it was the latter. 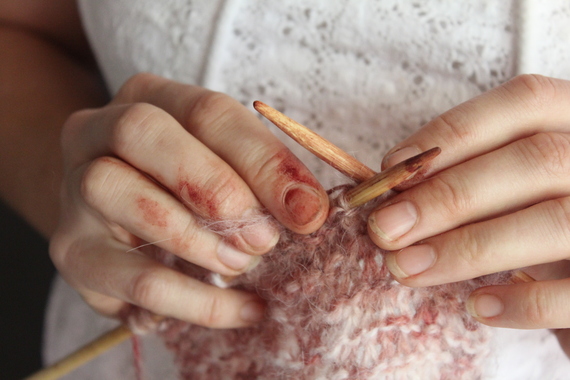 Vanessa de Largie:
Casey. Thank you for allowing me to interview you about your performance piece Casting off My Womb. It's a very powerful piece triggering hate, disgust and love amongst your audience. How did this project evolve?

Casey Jenkins:
In my work and my life I've always been intrigued by how identities are formed in relation to broader communities. I'm interested in outsiders, people who go against the grain, and to what extent it's possible to forge an autonomous sense of self if it runs counter to established powerful group-think attitudes enforced by shaming.

Casting Off My Womb was an exploration of the expectations society has of appropriate behavior for a person with a body like mine, particularly in regards to bearing children, creating art and voicing opinions, and how closely those expectations align with or skew what I choose to do with my body and my life.

I've done a lot of work in the past with craftivism (craft activism) which honors and subverts so-called "feminine" crafts and uses society's dismissive attitude towards making techniques such as knitting and embroidery to pull the wool over their eyes, so to speak. A political slogan stitched on a fence, for example, is much more likely to be read with a smile than one scrawled with a spray-can. I've also explored how words describing body parts associated with women are considered the most offensive in our language and the way those body parts are used as focal points for the expression of misogynistic shaming. Casting Off My Womb was a natural progression of all of these things. 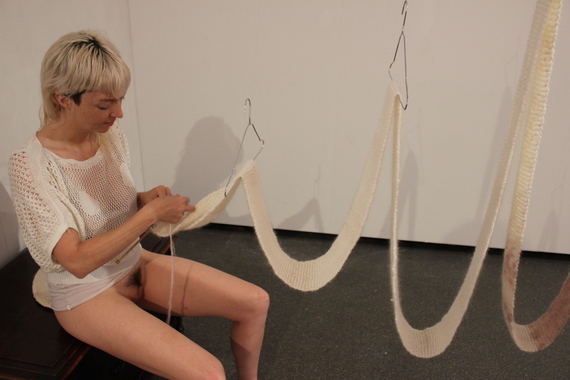 Vanessa de Largie:
Knitting with your vagina was one thing but choosing to be authentic and knit whilst menstrual, caused reaction from around the globe. Did you expect there to be such negativity?

Casey Jenkins:
I performed Casting Off My Womb in a small gallery over 28 days. While I wasn't painting bland water-colour landscapes, (and very little referencing menstruation or bodies associated with women will be viewed as benign), in the context of performance art within a gallery space the work was not particularly bombastic and I expected it to be received with circumspection and consideration, which it initially was.

When SBS TV asked to report on the work I knew it would ruffle some feathers -- in a medium in which blue liquid is used to advertise tampons, how could it not? It was when they posted their report to youtube with the title "Vaginal Knitting" that the mass of negative responses poured in. I knew menstruation was a taboo, but the scale and vitriol of the internet response did surprise me.

Vanessa de Largie:
Personally, I found it sad that so many females deemed your performance piece as disgusting. What do you think this says about society and menstrual stigma?

Casey Jenkins:
Shame is an incredibly powerful force for maintaining and enforcing prevalent attitudes. It's fascinating because those targeted by it often seem to be engaged most actively in its perpetration; perhaps as a way of trying to personally avoid the most hurtful direct impact of the shaming they align themselves with the status quo. Menstruation is the target of a lot of misogynistic attitudes. The fact that those who might be hurt by misogyny are taking part in the shaming is an indication of how deeply entrenched it is in the world today. 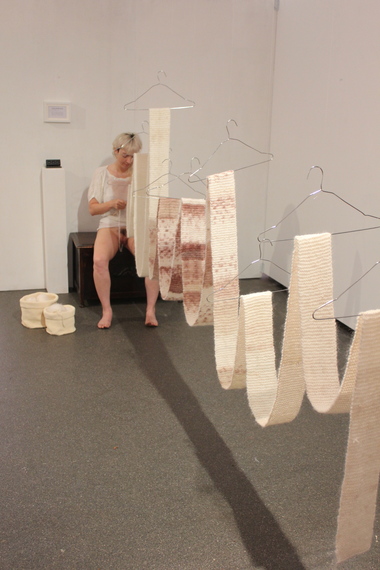 Vanessa de Largie:
I have to ask you this. As a woman, period-time can be tough -- menstrual cramps, fatigue, crankiness and discomfort. Did you rehearse the work in the months prior to allow your body to adjust or was it done raw? And when you finally did perform that part of the female cycle, was it f**king liberating?

Casey Jenkins:
As a little side-note but I feel it's important to say, I don't personally associate menstruation with womanhood -- not all women menstruate and some trans men and genderqueer people do.

I do menstruate currently, obviously, and there was honestly little to no physical discomfort in performing that aspect of the work. Spending the days rhythmically knitting and being open about the rhythms of my body was a soothing, calming and, yes, liberating experience -- much more comfortable than hiding my period away and pretending my body was functioning 'normally', as I would usually do. I did make prototypes prior to the performance but they were more to test the absorbency of the wool rather than my body's tenacity. It was not a great physical feat.

Vanessa de Largie:
What's next for you and your art?

Casey Jenkins:
I'm developing a work in collaboration with a neuroscientist and a computer-scientist exploring visual perception, intimacy and how our experiences shape our prejudices, world views and ability to empathise with others.

I've also been screen-shotting and compiling all of the internet responses to Casting Off My Womb (there are thousands and thousands of comments posted, mainly expressing sentiments like "WTF", "gross", "disgusting" and "she's crazy"). I've been collecting and storing wool soaked in menstrual blood and am hacking a digital knitting machine to reproduce the most common of those comments using that wool.

The initial part of this follow up work will be shown as part of the upcoming "f generation" exhibit George Paton Gallery in Melbourne and will be shown in full next year. 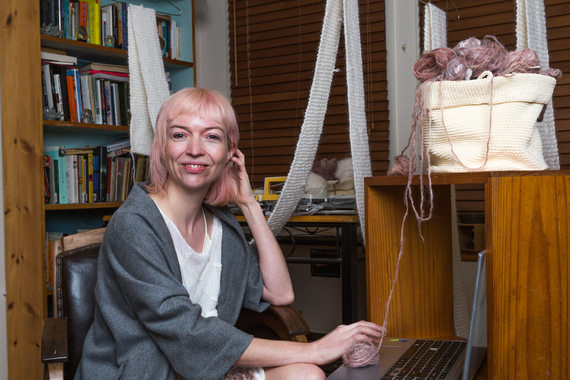