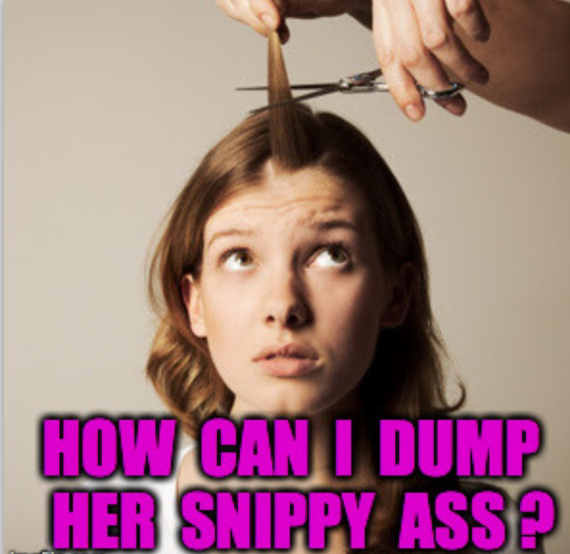 It's true -- good help is so hard to find. But does that mean we need to stay monogamous for the rest of our lives with the people we pay? I needed to get braver at getting rid of the inadequate individuals I paid good money to -- so I kept a little journal to see where I had gone wrong. Here are some of the entries.

HOW I WORKED UP THE NERVE TO GIVE EVERYONE THE AX!

THE ACCOUNTANT: Firing him shouldn't have to be so taxing. I mean c'mon, once in a while I'd like to see how someone else crunches my numbers. Wesley my CPA, is the only one who has ever seen the inside of my tax shelter and in 2014 when I reported my earnings, he winked and promised:

Mmmmmm. Still it's not like we're married or even engaged. And I wouldn't be cheating on my taxes either. Just him.

THE HOUSEKEEPER: It was awkward coming clean with Winifred (Wynn for short) but I decided she'd been sponging off me for too long. I had a plan to wipe away her mirror streaking mediocrity in one fell swoop. Next time she stated, "I don't do laundry." I would simply retort, "Oh yeah? Well I don't do Wynndows!" But I wasn't prepared for what happened next. Wanting a clean slate, I gave her $100 "good-luck" money -- but as she departed, I noticed Wynn tossed our dog a twenty dollar bill. "It's only fair that I wish my partner (and his tongue) good-luck as well," she said. "Every night, he'd wash the dishes while I'd dry." Ugh. I should have just left her a "Dear John" letter on top of the toilet.

THE GARDENER: First of all, he insists I refer to him as my Landscaper. And even though I love it when he talks dirt to me, I began to plant the idea in his head that I would soon be asking for my garage door-opener back. I didn't want to soil his reputation because I knew if there was any mud-slinging, I would be the one losing ground. So this morning as I was pining away, staring at my neighbor's lush lawn, I casually remarked that it was mowed using the newest "cutting hedge technology." Of course he took offense and reminded me that "the grass is always greener." I felt great re-leaf when he didn't try to get at the root of our problem and instead simply withered away -- out of my life (and yard) forever. But I will miss his anti-coil hose with the strong pistol nozzle.

THE DOG-GROOMER: This one was trickier because I needed to convince her that my two-year-old Shih-Tzu (Breed name itself causes embarrassment because it sounds like you're swearing in Japanese.) Just needed a change of pace.

Groomer: (french accent) What makes your dog say "Adieu?" How did things go so askew? And now it's me he wants to eschew?

Me: First of all, Gesundheit and Bless you! Maybe he just wants something new? Or maybe there's such a hullabaloo, your shop is like a zoo? Or maybe he doesn't like the view? Or perhaps for a male, you make him look too Fru-Fru?

Groomer: Yeah? Well I'll get you! AND your little Shih Tzu dog, too!

I personally think she could have been more creative with her last dialogue rhyme. It was reminiscent of the Wicked Witch from Oz.

THE HANDYMAN: Phil was a real "Hanger On-er." Two months ago, I Hammered home the idea that there would be no more Screwing around in my household. I made a gut-Wrenching plea never to see Phillip's Head around these parts again. Last night I opened my front door to see him on a ladder changing the porch light bulb, proudly brandishing his Tool. "What part of 'Fired!" do you not understand?" I shouted. He proceeded to fix my BBQ grill. Feeling compassionate, I asked if he'd still consider building me a maple desk. "Oh boy, I wood. I wood!" He appeared quite Level-headed, so off we went to the lumber store and I think we've Repaired our relationship, too.

THE CHIROPRACTOR: I didn't want him to give me an attitude adjustment so I decided to just bend over back-wards being nice and playing it straight. Besides I've been in real pain and didn't want to cut off my nose to spine spite my face. But last night I slipped up at the disk-otheque and accidentally danced with a new chiropractor who promised he'd always be at my back and call.

THE GYNECOLOGIST: She's always been a little crotchety with me and I didn't like how she insisted I step on the scale fully clothed (that accounts for 7-10 more pounds, right?) but then had no problem making me completely strip for the exam. Also when I asked if I could turn my back to the scale so I wouldn't get depressed at seeing the number, she said it aloud as she wrote it down. Thanks! That's when I asked her how often she gets her speculum calibrated and I knew I had just put my foot in my mouth. But it was better than putting my foot in her stirrups.

THE MANICURIST: This one tried using reverse psychology on me to get me to think she was dumping me! She told me I nibbled on my cuticles too nervously and she'd had enough! What biting sarcasm! Then she told me my nails were such a mess, she'd rather file her tax return -- maybe I should fix her up with my Accountant! (See #1 above.) After calling me "Dishpan Hands" I couldn't take her insults any longer so I told her I hated the perfume she wore. "You're soaking in it," she said slyly. You gotta Hand it to that Madge!