As we cranked away at 12,000', the air became thinner and thinner. The trees disappeared. Summer ice fields clung to vertical mountain peaks. I felt like I was riding across the moon.

I struggled to breathe.

Riding on my left, Randy reminded me to breathe into my gut, as deep as possible.

My dad, riding on the other side, said: "Quit talking. You need to conserve."

Four hours into our 27.5-mile ride up the highest paved road in North America in the Bob Cook Memorial Mt. Evans Hill Climb, I had to remind myself how fortunate I was to do this climb. 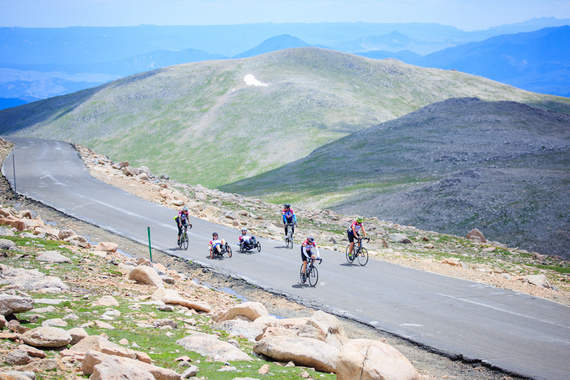 I recalled a recent conversation with a friend living with Friedreich's ataxia (FA). He had been in intensive care for complications caused by FA several times in the past few years.

I asked my friend how's it going, as I do with anyone, and I expected the typical Jon response: Doing great. Nice to see you.

Instead, Jon said: "Not so good actually. Lately I have had a hard time feeding myself, and breathing is becoming more and more difficult."

I looked at the winding mountain road ahead, stopped talking, took a breath and pedaled on.

Remember to Pace yourself: Find your Rhythm

Now, above 12,000 feet, it was becoming difficult to take a drink of water. Although I had been drinking about 2 liters of water per hour, I had to prepare for it.

I hyperventilated by taking several fast and deep breaths: Hold the breath while the water goes down. Breathe fast and deep. If done properly this would result in uninterrupted pedaling.

If interrupted for any reason, my head would get light. My breathing would fail to get back on track. I might lose it all together and then the day would be over.

The bottom of the valley loomed to my left. The finish line, miles ahead. Often, during these long rides, my mind wanders. Here is what life asks of me, I thought. Diagnosis of a rare disease boils down to simplicity: Either I retreat to safety, or take to the unknown.

When I dwell on my disability, and I feel self-pity and doubt, the equation becomes clear.

Too much self-doubt... I'd never take a risk.

Feel the Pedals Beneath your Feet

I choose to see FA as a challenge just like any other challenge in life, one to be approached with objectivity, one pedal stroke at a time.

This road always says: Live in the moment. Feel the pedals beneath my feet, the wind on my face, the cumulous clouds building above me.

About a half-mile away from the first of eleven switchbacks, we approached the steep ascent at four mph. A sheriff sped past us on the narrow road. If he were any closer to the edge he would have gone over the cliff. Just after that, we heard the siren of an ambulance.

The sound disappeared as the ambulance hugged the mountain and went around corners. We heard it on and off for 15 minutes as we made our way up the mountain. The ambulance passed as we approached the scene and backed into place in front of a rider who sat next to his bike.

I overheard another passing rider ask: "Crash?" A reasonable question as riders were returning down the mountain at 30 plus mph after having completed the hill-climb.

The race official replied: "No, just passed out".

I tried to keep from rubbernecking, I felt my head begin to lighten and I realized I was not focused on breathing. I took several breaths into the deepest part of my lungs and my head became clear as my brain soaked up fresh oxygen.

On bad days, the devastation of Friedreich's ataxia looms large. It's easy to let my mind drift to the worst: "Premature death."

But I'm not dead yet.

On the mountain as the precious oxygen cleared my mind, I refocused on the task at hand. 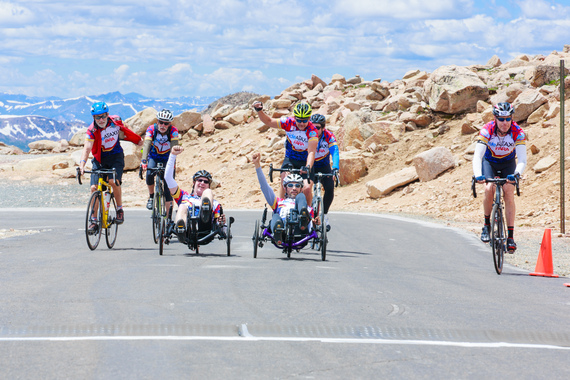