We've all seen the Ikea commercial where the woman, overwhelmed by the unbelievable low prices, peels out of the store parking lot. She thought she had gotten away with something, a pricing mistake, or perhaps something more -- a small win against the corporate system.

The major 2013 pricing glitches by United and Delta have left thousands of customers with a similar victorious feeling. These individuals didn't save on a build-it-yourself coffee table; they got something much larger. These lucky customers won the ultimate pricing glitch lottery. 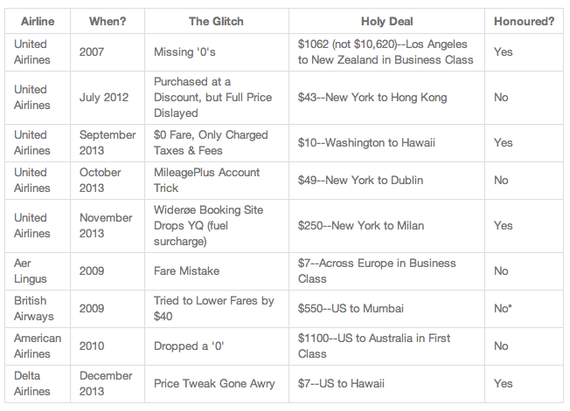 *This pricing glitch was only honored for customers who booked directly through British Airways.

But wait. Why do some pricing mishaps leave customers jet-setting to Hawaii for the price of a Happy Meal while others are quickly dismissed?

Why Some Are Honored and Others Are Not

Although it's hard to explain the unexplainable -- Honey Boo-Boo, flood pants, Disney's Fantasia -- I will try to crack the pricing glitch code. Even though the rules followed by airlines post-mishap are ambiguous, there is a slight method to the madness.

This past October, those in the know flocked to United Airlines in hopes of snagging the glitch of a lifetime. This computer mistake involved setting up a MileagePlus award account and tricking the system into thinking you had enough miles for a reward flight. This allowed customers to snag flights for virtually nothing. How does $49 from New York to Dublin sound?

Well, from United's standpoint this didn't sound too good. Unlike the airline's massive September pricing mishap, which left thousands of passengers scooping up $0 fares, this glitch did not go off without a hitch. Reportedly, the airline refused to honor it, saying that their customers were intentionally manipulating the system. Can't really argue with that.

Can It Pass for the Old "Customer Should Have Known Better"?

A more subjective and downright annoying explanation for not accepting glitch fares happens more often than not. This one goes something like "too good to be true" and "customers should know better."

In 2009, when Irish carrier Aer Lingus published outrageously low $7 business-class fares, hundreds swooped them up. Soon after, the airline cancelled the tickets, reporting that customers would have known that "something was up."

Similarly, British Airways accidentally released a fare for $40 plus taxes and fees from Chicago to Mumbai. The fare rang in at approximately $550. However, the deal didn't last long, as the airline cancelled the tickets of most passengers. British Airways stated that the fares were clearly a mistake, and that "anybody who knew anything about travel knew it was totally out of whack."

Although a $7 fare would raise some eyebrows in Europe, a $550 seat could be passed as legitimate. It seems as though "customers should have known better" can become an easy airline scapegoat.

Fear of the U.S. Transportation Department

The U.S. Transportation Department is an organization that you don't want to mess with. For airlines, a violation of the department's rules and regulations can mean serious fines or even permanent grounding.

The department prohibits false advertising and "post-purchase price increases," stating that all airlines must honor any mistake fare offered or face hefty fines. Without surprise, many airlines try to weasel their way out of this. These cases generally end up in court or are resolved with an alternative settlement.

The same British Airways fare glitch that left a majority of customers with cancelled tickets to India ended up going through to the U.S. Transportation Department. British Airways negotiated a deal with the department to reimburse any flight, hotel, or car cancellation expenses that a customer may have incurred after making the reservation. In addition, BA offered customers a $300 voucher toward a flight to India (if used in the following two months).

When an airline is deciding whether or not to honor a glitch, they must take into account customer satisfaction alongside potential lawsuits, and measure it against their overall financial hit. In some cases, the airlines claim that they cannot afford to honor the mistake fares and would rather risk it in court and with their customers.

However, the opposite can also be true. Perhaps United and Delta couldn't afford the unavoidable lawsuits, wrath from the department, and the burning hate from their flyers.

How to Snag a Pricing Glitch

Although pure, unadulterated luck certainly plays a factor, there are other ways to increase your chances of becoming one of the "chosen ones." I, for one, have been green with envy reading the taunting "$163 RT to Honolulu Business Class" or "$220 RT to Oslo" statuses on my Facebook newsfeed.

The craziest part: these statuses are always from the same select people, snagging time and time again.

Here's how you can snag:

1. Sign up on Flyertalk: Almost every pricing glitch is leaked on the Flyertalk forum first. The "Mileage Run Discussion" thread is where a lot of these leaks happen.

2. Join other deal forums: Other "deal" forums often catch these mishaps early on in their exposure. Forums like Fat Wallet, Slickdeals, and MilePoint are great for staying in the know.

3. Get email alerts: Websites like Airfarewatchdog or Farecompare will send email alerts when a flight you are interested in drops in price -- sometimes catching the major glitches in time.

4. Creep social media: With the most recent Delta glitch (which lasted two hours), a lot of customers found out about it via Twitter and Facebook. If an airline is trending, take notice!

5. Become a secret society member: I'm not kidding. If catching glitches is not just child's play to you, secret groups do exist to screen for irregularities. You'll have to pull your own weight, but if you can manage to get an invite into one of these exclusive clubs, you'll never miss out.

Although airline pricing mistakes are never a sure bet, they certainly add some sex appeal to the whole industry. These glitches are wild, unpredictable, and almost always leave someone feeling "used."

Whether or not you choose to actively pursue the next major glitch, a future unplanned seat sale is inevitable. I hope that luck (and loftiness) is on your side.