Meet Carm Goode. Or Miles Forthwrighte. Or should I say "and," since they appear to be one and the same? Here they are: 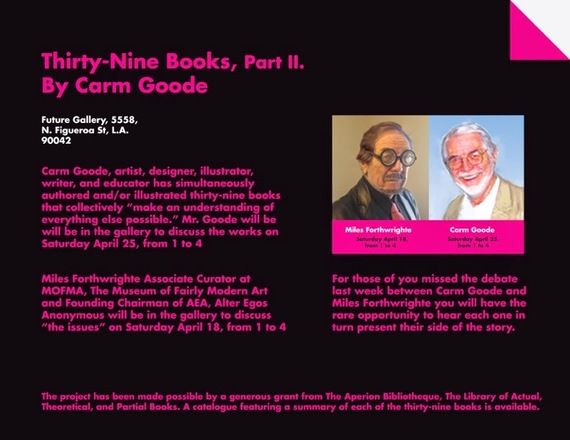 You'll note that Carm seems a jovial enough fellow, Miles a bit of a curmudgeon; Carm a free spirit, Miles clearly academic. Which seems to be how they work, not so much in collaboration as in friendly (?) contention with each other. They make their appearance at art openings and receptions -- these are sometimes called "performances" -- but, despite promises for public debate, never both at the same time.

Carm seems the more active and creative of the pair, Miles more the critic. Carm specializes in the design and creation of covers for found books, which are the objects on display on the walls at Future Studio, the offbeat gallery in Highland Park where Stuart Rapeport and Amy Inouye hold court with a pair of rather oddly assorted dogs and a plethora of also oddly assorted collectibles. (Disclosure: Amy, a book designer by craft, designed my own two most recent books.) Their current show is "Thirty-Nine Books, Part II." Was there a Part I? I don't know. It's possible. Is there a sly reference in the title to John Buchan's "Thirty-Nine Steps"? I don't know, but given the bibliophile bent of Goode/Forthwrighte, that too is possible.

For Goode, books are clearly a source of creative joy. He plays with the relationship between the content of old volumes -- picked up, I can only imagine, in some esoteric bookstore -- and the covers he creates. Of particular appeal to The Buddha Diaries, for example, is "Buddhabux: The Currency of Spiritual Wealth" -- a spoof not only on the spread of popular "spiritual" fads but also on the power of money in today's political and social culture. The front cover offers the display of two elaborately-designed Buddhabux banknotes, while the back cover blurb (as is the case with all Goode's covers), is an elegantly-written satirical passage about the relationship between said spirituality and cold hard cash.

And... "How To Change Your Mind" is a spoof on pop psychology, specifically the Gestalt variety that blossomed in the late 1960s and early 1970s. "The Seven Lost Muses" lists the inspirational (but hitherto neglected) Inne-Briana, Errora, Mortislina and others... Philosophical and psychological studies blend the serious with the hilariously absurd. Fiction blends cheerfully with fact, and actual "literature" with pure invention -- and we never know quite where we stand between the two. The ground shifts constantly. And Miles is sure to poke his nose in here and there with a wry, acerbic comment on Carm's work, or a book of his own ("The Third Person, In the Shadow Of..." -- presumably Carm Goode).

As always, satire has a serious purpose. We are asked to consider the injustices of our society, the absurdity of a good deal of popular belief, the pretensions of science and religion. What's astonishing is the encyclopedic nature of Goode's reach. His "Official Catalogue of The Aperion (look it up!) Bibilotheque" is a "Library of Actual, Theoretical, and Partial Books (...) devoted to exploring the prior conditions for understanding The Human Condition." It's the product of a rich and infinitely curious imagination, as is the collection of samples offered on the Future Studio shelves. Go see for yourself. You might even change your mind. though I'm not sure about what.