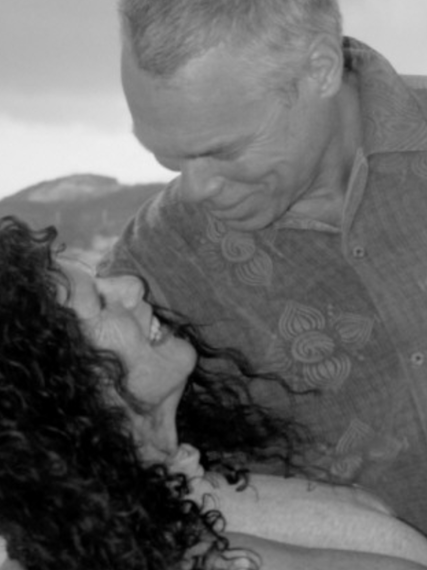 I'm always wary of people who say, "you can't change your spouse..." How preposterous. Of course you can change your spouse! In fact, if you've played house with the same person for 20 years or more and haven't managed to change them -- you're not doing it right. You might even be considered a slacker.

Take a look at my marriage for example. My family-of-origin is very LOUD. Simply put, we love the sound of ourselves. So naturally (per the the time honored principle of pairing with opposites) I married a quiet man. But over the course of 30+ years, I've unintentionally converted him into a veritable noise-machine.

Recently I was watching a home video with our kids from way back when they were babies (circa 1996). About 45 minutes into the video, the younger version of my hubby deigns to utter a brief comment and the camera quickly pans over to him. But he was done. That quiet remark was all he had. Shocked, my children inquired if their dad had been in the room the entire time...

...The chance of being in the vicinity of my spouse these days for more than a minute and not be fully aware of him is unlikely. He is the force that we reckon with.

It's really noticeable if he gets a song stuck in his head. When that happens, it's going to be YOUR song for the entire day, as well. I'm not talking about a subtle Vulcan Mind-Meld, like from Star Trek. I'm talking about something far more insidious, a full-on bombardment of the senses.

Yesterday's song du jour was Bruce Springsteen's, "Born To Run." That tune and it's metaphorical message of desperation, rebellion and youthful empowerment assaulted my psyche for the better part of 24 hours.

He claims he's only "into" the instrumental part of the music and I'm way too caught up in the meaning behind lyrics. But that didn't cut down on the number of times throughout the day that I was cordially invited to strap myself round his engines. Maybe he's right, and I am overly-invested in lyrics, but by mid-day I had my fill of analyzing my husband's runaway American dreams.

When he wasn't singing it, he was whistling it. Piercingly proud. Whistling is his jam -- he could win a Grammy for it. This particular song inspires a truly ferocious whistle riff -- it's low, it's high, it dips and crescendos. It's the ideal melody for showcasing one's remarkably vast whistling range.

And then, just to keep things flex, he switches over to the "neer-neer-neer." This is the savage sound a male human-being makes when he's amping up his air guitar.

Truthfully, it didn't really annoy me all that much yesterday. After all, when one's spouse is singing, whistling or neer-neer-neering, they're happy right? And who doesn't want their very own spouse to be happy?

But early this morning, he entered the room to ask me if I needed anything from Lowes -- when I said, "No thanks!" he belted out "Tramps like us!" as if it was our Official Couple Anthem. It was just so overwhelmingly yesterday.

I know it's entirely my fault he's so in-your-face. Obviously, I rubbed off on him through the years and have no one but myself to blame. But still ... this tramp was thinking, 'different day -- different song.' I'm even willing to return to last weekend when, for a relentless 24 hours, he wore me out by latching on to a twangy rendition of a Marshall Tucker Band favorite.

Warning: Exercise Extreme Caution When Setting Out To Change Your Spouse
5 Ways Post50s Can Improve Their Sex Life