Our nation's leaders must do better than simply accept or ignore that 14.7 million, or 20 percent, of our nation's children are living in poverty. The consequences of poverty and depravity to a child's health, their education, safety, nutrition, and overall well-being limits their opportunity and future.

In our great nation, there is simply no excuse for this. The reality is that not one single child in America should go to bed hungry or homeless. And today's poverty isn't something that just afflicts people who live in our inner cities or in poor, rural areas. It's not something that just afflicts people of one color or ethnicity. It's striking families who never imagined that they could find themselves telling their kids that they don't have any food or that the electricity has been shut off.

Although it takes leadership, a commitment, a promise, accountability, and some effort to combat child poverty, the adoption of a Child Poverty Target, as proposed by British Prime Minister Tony Blair in March 1999, has demonstrated that cutting child poverty is both doable and a choice.

Our historic aim will be for ours to be the first generation to end child poverty. It will take a generation. It is a 20-year mission. But I believe that it can be done if we reform the welfare state and build it around the needs of families and children.

Blair's initial promise was followed up with a number of specific policy initiates that, according to Jane Waldfogel in her book entitled Britain's War on Poverty, helped the United Kingdom (UK) cut its absolute poverty rate in half - from 26 percent of children in 1998-1999 to 13 percent in 2007-2008.

in sharp contrast, the U.S. child poverty rate grew over the same time period, reached a 20-year high in 2011, and remains worse than it was 16 years ago.

Recognizing that our nation can and must do better by its children, Reps. Danny Davis (D-IL), Gerald Connolly (D-VA), Barbara Lee (D-CA), and Elijah Cummings (D-MD) have introduced the "Child Poverty Reduction Act of 2015" (H.R. 2408), which would establish a Child Poverty Target in our country - much like the one that has been so successful in Great Britain.

When Prime Minister Blair established the Child Poverty Target, there was some initial criticism of Blair for the adoption of a long-term Child Poverty Target without parallel policy changes at the outset. In the words of one British advocacy group in 1999, "Why wait 20 years, they can do more now."

However, the evidence indicated that the Child Poverty Target inspired immediate action, as measures were adopted that helped the child poverty rate drop by 8-9 percentage points in just the first two years after Blair's declaration and continued to decline after that. In comparison, without the Child Poverty Target, child poverty in the United States trended upward in both the short- and long-term.

Consequently, although the British child poverty rate was one-third higher than the U.S. rate in 1999 when Blair made the pledge, the British's child poverty rate had dropped below that of the United States by 2001 - just two years later - and the gap between our two nations are continued to grow over time. 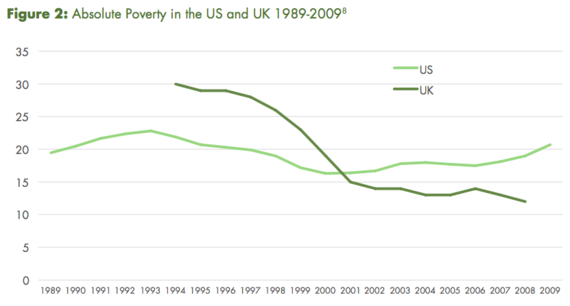 As for details as to how the UK made progress, the Labor Party's strategic agenda under Prime Minister Blair and Labour Party Chancellor Gordon Brown included a number of policy changes and investments in children that have resulted in positive change. As Natalie Branosky and Jane Mansour of InclusionUS write, those child- and family-friendly policies included:

Although some believe that poverty is intractable and not worth the effort, the combination of these initiatives helped the UK successfully cut the absolute child poverty rate by half in ten years. In addition, the British have made significant progress on other important indicators, including "relative child poverty" and "material deprivation."

Lasting Change and Government Accountability in the UK

The U.K. Child Poverty Target has also proven to remain important, even with the change in political leadership. In fact, despite the fact that the Labour Party initiated it, the Conservative Party, the Liberal Democratic Party, and the Scottish National Party have all embraced the Child Poverty Target.

And, as the leader of the Conservative Party, David Cameron reaffirmed that commitment just a month after being elected Prime Minister in 2010 when he said:

We are absolutely committed to meeting the child poverty targets. This Budget, despite all of its difficulties, does not add a single family to child poverty.

Although the focus has changed from an active pursuit of cutting child poverty under Blair to a more defensive strategy of preventing the child poverty rate from rising, Prime Minister Cameron's embrace of the Child Poverty Target has caused his Government in 2014 to, according to Branosky and Mansour, "develop a series of child poverty strategies, each of which span three years."

This is important because, even 16 years after the adoption of the Child Poverty Target, candidates and elected leaders in Great Britain must still think about, put forth policies, and answer as to how they are going to address child poverty. In fact, the Child Poverty Target helps the public and the media to monitor, speak out, and hold government leaders accountable for how their priorities and decisions impact child poverty.

For example, last week, David Holmes, the chair of End Child Poverty in the UK, criticized some of the budget austerity measures pursued by the Cameron government. According to Holmes, "During the election campaign David Cameron promised not to cut child benefit, now is the time for him to keep that pledge. . . . This is an opportunity to be bold and to invest in our children's future."

In comparison, even with the improving economy and slight drop in the poverty rate in recent years, 14.7 million U.S. children (19.9 percent) were living in poverty in 2013 and children continue to suffer from a higher rate of poverty than any other age group. In fact, the child poverty rate in 2012 was a stunning 70 percent higher than that for all other Americans over the age of 18.

That is unacceptable, and it is well past the time for the U.S. to take action. According to economist Harry Holzer in testimony before the House Ways and Means Committee in 2007:

. . .the costs to the United States associated with childhood poverty total about $500 billion per year, or the equivalent of nearly 4 percent of GDP.

We simply cannot afford not to act.

When a group of children's advocates sent a letter to President Obama and Republican presidential nominee Mitt Romney [during the fall campaign] asking for their plans to address child poverty, they initially got no response. But Obama did deliver a substantive response a couple of days before the second debate.

. . .Still, more needs to be done [and] it's going to require a national conversation. One that builds consensus and the political will needed to move from talk to action (of some kind).

Fortunately, Robert Putnam has sparked such a dialogue with his best-selling book, Our Kids that led to a recent summit at Georgetown University moderated by E.J. Dionne of the Washington Post with President Obama, Putnam, and Arthur Brooks at the American Enterprise Institute.

To take that discussion to the next level in the U.S. and into the halls of Congress, state capitols, and local governments, we should recognize some important lessons from the UK experience.

Britain's success in reducing child poverty over the past decade provides at least one very clear lesson: where there is a serious public intention and effort to tackle child poverty, substantial reductions can in fact be achieved.

A related lesson is that it is not necessary to work out all the details of an antipoverty policy in advance. Stating a goal and setting targets - as Blair and Brown did in 1999 - can mobilize government and drive the development of specific strategies.

For the U.S., the moral and economic consequences of having nearly 15 million, 20 percent of our nation's children living in poverty, is devastating. A child who grows up in poverty is far less likely to perform as well as their classmates in school, more likely to have food insecurity, more vulnerable to homelessness, and more likely to be subjected to violence, abuse, and neglect.

The negative consequences of poverty and the lack of attention to them do not reflect the values and priorities of the American people. A Battleground Poll by the Tarrance Group and Lake Research finds that, by a 69-26 percent margin, Americans do not believe the next generation will be better off economically than the current generation. As Chris Cillizza of the Washington Post notes:

The numbers from the Battleground Poll echo other data that has come out over the past few years that suggests a deep pessimism within the electorate about what sort of country they are leaving their children. 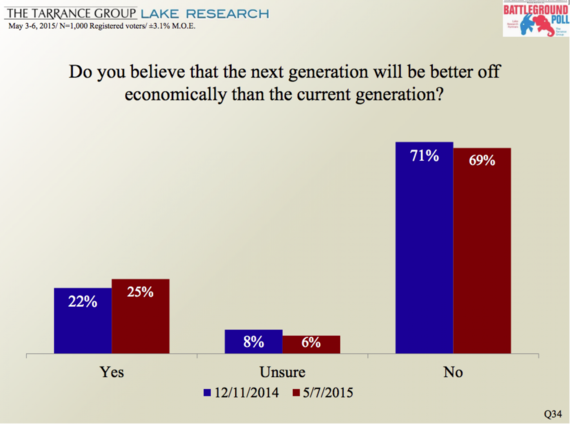 A pathway to success in the United States would start with gaining bipartisan support for and passage of H.R. 2408, the "Child Poverty Reduction Act of 2015." This would be in line with the desire of the American people. In a poll on the eve of the last presidential election, voters expressed, by an overwhelming bipartisan majority (82-13 percent), support for having the president and Congress commit to a plan to cut child poverty in half within 10 years.

The American people understand that we can't afford to wait any longer. Although children represent just one-quarter of the population, they represent all of our future.