This article originally appeared at FastCompany.

There are ways to heal yourself and fix your inbox after it becomes an intimidating, guilt-inducing, unknowable mess. You can declare Email Bankruptcy, or just triage the last week of email and start over. You can implement a system like Inbox Zero, or a pared down three-folder version. But then it’s up to you to check those other folders on a regular basis.

Maybe you don’t trust your future self to be that good. Or maybe your inbox is mostly under control, except for a few pesky emails that require another step: checking your calendar, waiting for someone else to respond, or so on. These are the emails that sit there, smirking at you, mocking your attempts to close out discussions and unburden your brain.

If you are nodding along with this, I would point your attention to two tools that have quietly helped at least one procrastinating, neurotic, over-committed worker to keep in touch and magically remember when things have gone too long without action. They are the Boomerang tools, and they are great tools for those who can admit they are not perfect with to-do lists, scheduling, and not letting topics drop.

Boomerang’s mail tools work as a plug-in for web-based Gmail or the desktop Outlook client. Boomerang Gmail works as an extension (plug-in) for Gmail or Google-hosted Apps accounts, and works with Firefox, Chrome, or Safari browsers. Boomerang Calendar works for Chrome and Firefox, and similarly requires a Google-based email account and calendar (though you can usually sync your email and calendar to Google if that’s a limitation). Boomerang Calendar is free while in its public beta, while Boomerang Gmail gives you 10 message credits every 30 days or so, with monthly plans for unlimited usage.

Boomerang Outlook is a software plug-in you can try out before buying, and may require permission from your company’s IT folks. Boomerang Gmail and Calendar are separate apps, while Boomerang Outlook does both of those jobs.

Now, on to actually throwing the Boomerang tools into action.

Send Email Back To Yourself, When You Can Deal With It

Some email arrives too early for you to really use it. An invitation to an office potluck that requests replies with what you’re bringing, for a date three weeks in the future, for example. You’re not going to shop and cook for that party until the week it happens, but you will want to see what dishes others have replied with before you shop. 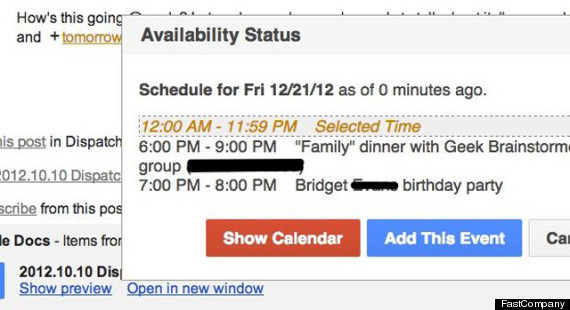 So take that “New Year’s Eve Luncheon” message and send it away for now, either to a rough date (“4 hours,” “Tomorrow afternoon,” “2 weeks”) or to a very specific time. Do this by clicking the Boomerang button, above and to the right of your message, in Gmail or Google Apps mail. On Outlook, right-click on the message, mouse down to the Boomerang menu, and choose your time. You can check “Only if nobody responds” if you think your coworkers will probably reply-all and get your attention anyway. But if you don’t check that box, or everybody hits just the boss, the email will arrive back in your inbox exactly when you need it, with a little note that Boomerang delivered it.

It must be noted that Boomerang does this by sending your message away to its servers, then re-sends the message to you. Boomerang for Gmail stores only your message headers, not the body of your email (which is kept archived in your Gmail), and Boomerang for Outlook works entirely on your own computer. But check with your IT gurus to see if that’s kosher.

Make Sure Your Sent Emails Get A Timely Response

Whose fault is it when an email thread dies from neglect and forgetfulness? Boomerang helps ensure it’s other people and their indecisiveness that take the blame. When composing or replying, Boomerang adds a version of its Boomerang menu to the compose box.

Click the checkmark to “Boomerang this message,” just underneath the address and subject fields (it should show up in both the standard and the “New compose experience” in Gmail). The default is to send your message back to you if you don’t receive a reply, which makes sense. It works for a lot of messages: pitches to managers or potential clients that don’t get a response, reminders to teammates and service teams to do something you know they won’t get around to, and more.

There are many reasons you might be up at an uncommon hour: newborns, nervous energy, international soccer. But some people read an email sent in the dead of night as evidence that you were, shall we say, not yourself. You’d rather they get that email first thing in the morning and be impressed with your diligence and early rising nature, not your ability to avoid typos after a bender.

So, with Boomerang installed, choose the “Send Later” option in Gmail or in Outlook--it’s a button that’s placed right next to the standard “Send.” Just as with Boomerang-ing a message you received, you choose either rough time frames or a specific send point. There’s an extra option to send a recurring message, if you really need to hammer home a point with somebody (teenagers, perhaps). Send Later is also something of a fail-safe way to send out birthday greetings, event reminders, and thank-you notes.

Wait--what if I scheduled a message to go out later, or Boomerang back to me, but now I need to check it, or change when it gets sent? You manage your Boomerang-ed messages at the Boomerang maker’s site. You can change a re-sending time, send the message immediately, or cancel your future email entirely.

Reply To Invitations And Schedule Meetings Faster Now on to Boomerang Calendar. Install it and you’ll only maybe notice the new “B Cal” button. But then go ahead and hover over anything, in the Gmail or Outlook versions, resembling a date: “tomorrow,” “Tuesday at 3,” “Next week.” 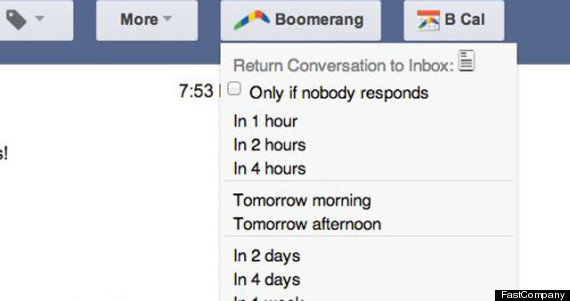 Up pops your availability around that time, as reported by the calendars you have on Google Calendar, so you can instantly respond with a yes/no/maybe. You can click “Show Calendar” to get details of events you’ve forgotten about. And if the email calls for scheduling a whole freaking meeting, click the “B Cal” menu to either invite people to vote on a meeting time, or have Boomerang Calendar scan your calendar and suggest a best time.

As noted, sending emails into the future and dropping the onus on other people to answer them is not a total solution to having too many people begging for your attention, or feeling compelled to address them immediately. But Boomerang is a handy tool for a few specific problems. It’s a shotgun, or maybe a shovel, for those last few zombie emails that refuse to die.

Read this story at Fast Company.