With a laugh that ascends the musical scale like a ringing bell, bright eyes brimming with joy and personal warmth that makes you feel as though you're standing in front of a campfire, Katia Verresen is someone you want to spend time getting to know. She works as a leadership coach, independently with her own firm, KVA Leadership, and in conjunction with the bestselling author of Power, Jeffrey Pfeffer of the Stanford Business School.

I wanted to speak in depth with Katia because she coaches executives to lead, in essence, the Life out Loud, focusing on fearlessness as a primary objective. My mantra being "Fear less, love more," I was intrigued to learn about how Katia guides others in conquering their fear, and how she has overcome her own. 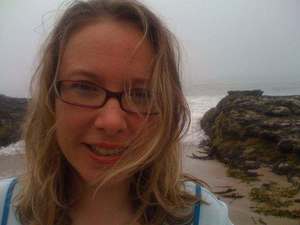 Katia has a fascinating background. With grandparents hailing from China, Scotland, Holland and Italy, she grew up in France. "As a kid, I called my way of seeing things 'looking beyond the corners.' I felt like I had a different perspective than most people, more global and multicultural."

After completing her French baccalaureate, Katia attended UC San Diego, and then earned her law degree at Santa Clara University. Being based in Silicon Valley just as the dot-com era was taking hold, Katia felt profoundly influenced by the energy of the high-tech start-up community. Yet she left a high-profile career at one of the big Silicon Valley law firms in order to bring the Bay Area's culture of innovation to Europe. There, she spent several years connecting entrepreneurs and investors with the knowledge and expertise they needed to build successful businesses.

Katia returned to Silicon Valley one month before September 11, 2001. Then the dot-com bubble burst. Eyes wide, she said, "It was as though a forest fire had taken over. Everyone was in a zone of complete paralysis due to fear. I looked around and thought, 'What's going on? It's like the Twilight Zone here. Where are our leaders during this time of hardship? Who has got what it takes to be fearless and lead us out of this?'"

Katia quickly came to the conclusion that you can't be creative or a solid leader and be fearful at the same time. So she started her coaching business. "I realized that fearlessness is often not addressed in leadership. But to me, it's the first gate you need to walk through. If you're in fear, you'll compromise yourself and your team. Fear is crippling and blinding; it will not allow you to execute what you need to do to be successful."

To develop her own skills, Katia works within the Native American warriorship tradition. "It's about: are you standing in the fire for your people?" she explained. "Are you fearless? Do you have clarity? How are you managing your power? Do you have tenacity? When something hard is happening, you're there with it, not shying away from it. You make a deliberate choice, moment by moment, to live passionately now."

I couldn't keep myself from shouting, "Amen, sister!" to that Life Out Loud mantra.

Katia continued. "To live passionately, you need to set your unwavering intent on making your dreams come true. Where people lose steam is when they start to question themselves. Of course you want to be flexible in life, but you can't doubt your goals and dreams. You must stand in certainty that it's going to get done, then reverse engineer it. People squander so much mental, physical and emotional energy on doubt and fear. You've been given the blessing to be alive. What are you going to do with it?"

I asked Katia if she had any techniques that she'd be willing to share for helping people to stand in their fear and face down their doubts. Katia said, "First, you need to be familiar with the feeling of fear gripping you. My greatest irrational fear was getting on a horse. So Chief made me ride one to conquer the fear. At first, I was just petrified, shaking like crazy. But as I stayed on the horse, even as he kept moving, I had to learn to ride the fear and not give into it. I went from not being able to touch a horse, to galloping in the Gobi desert in Mongolia, land of the horse people.

"Once you know how it feels, the second step is to understand that fear literally is an illusion. Yes, we're wired with fear in order to survive, but we also have irrational fears based on our upbringing and cultural setting. So while you're experiencing fear as real, and your body is having very real biochemical reactions, it's often not 'reality.' You're probably not going to die from riding a horse, for example. So the second step is to not believe the fear."

Katia continued, "Finally, you learn to make friends with your fear. By sitting with it, acknowledging it and understanding it, you come to realize that you need not be afraid of it. I've found that most people are a lot more afraid of what they think is there than what's really there. Have some tenderness with yourself. Give yourself some love, and start to see fear as your teacher. It will show you your edge, the limit of what you think you can do. You are capable of so much more. When you go beyond your fear and your edge, you find out what you are truly capable of. That is the true gift of fearlessness."

In conclusion, Katia said, "Fearlessness is so important, especially because we live in a culture that thrives on fear. So many people are paralyzed by it and don't realize it. They go into fight/flight or submit mode and believe that is normal. But when they do, they're operating at not even at 25 percent of their capacity. It's worth getting on this fearlessness journey so that you can get to freedom, choice and a life that makes you happy. You can connect to who you were really meant to be to begin with. You have to walk through that gateway. It's so worth it to make it to the other side. Fearlessness means having the freedom to live out loud."