We realized with horror recently that some of you are missing out on some of earth's most delicious stuff because certain foods and techniques seem kind of scary. "Don't Be Scared, It's Just _____!" is our new series tackling the foods you will be glad you gave a shot. Quit hiding and let's get cooking!

We unabashedly love artichokes. Their flavor is really unlike anything else on earth, they are great for you and (conversely) they are one of the few foods society has collectively deemed acceptable to dip in drawn butter. As the saying goes, all things worth having are worth fighting for, and cooking artichokes occasionally requires a bit of elbow grease. But if you think this thistle is impossible to prepare, we've got great news for you: there's a simple way to cook everything and cooking artichokes simply usually makes them taste the best. A few things you'll have to deal with:

1. The spines. We know they seem really scary. We know you prefer that your food not fight back. So we're going to make this extra simple: lay your artichoke on its side, and with a sharp knife, cut off about the top quarter, so it looks like this: 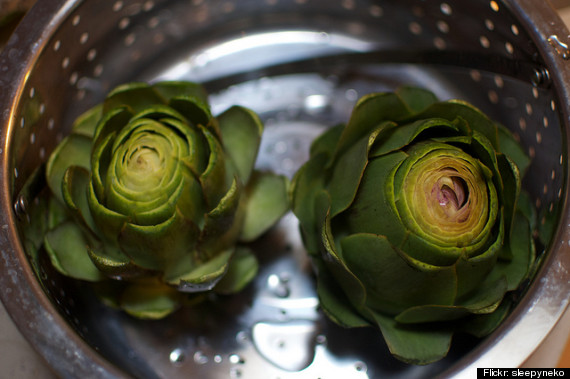 If you want to get rid of the spines on the outer leaves (especially great if you're cooking for kids or other people who act like babies), just take your kitchen scissors and snip off the tops of any leaves with spikes.

2. The stem. For lots of artichoke preparations, like steaming, baking and roasting, you'll want your artichoke to be able to stand up on its base. To do this, just trim the stem of right at the base of the artichoke, creating a flat surface. You'll be left with one of these: 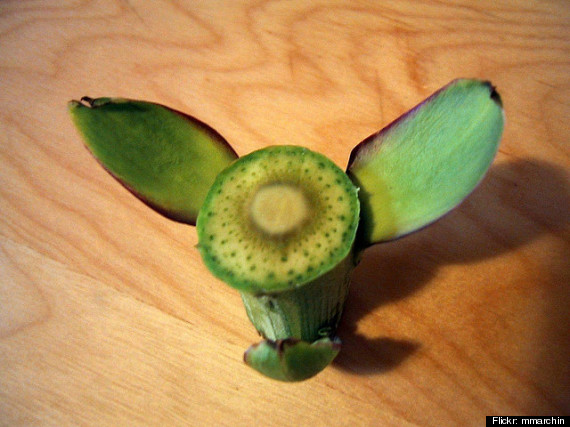 Don't throw this out! Put it in your stock bag in the freezer. There is great flavor in that woody stalk.

3. The oxidization. One of the things people find scariest about the artichoke is that it turns brown once you cut it -- THE HUMANITY. Do not panic! This is why lemons were invented. You can either drop your trimmed artichoke into a bowl full of water with added lemon juice, or (even easier), just rub a cut lemon on any parts of the artichoke you've trimmed. Artichokes and lemons are buddies, not only because of prevented oxidization, but because they taste awesome together. Also, pro tip: if your artichoke turns brown in some places, it's still going to taste exactly the same, so do not have a conniption. Best friends: 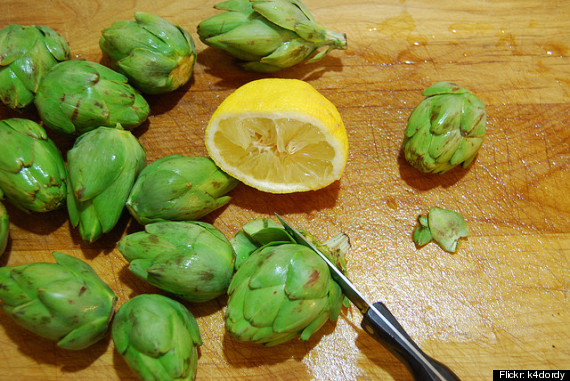 Okay. Now you've got a prepped artichoke, so what should you do with it? You have a lot of options, which we know can be overwhelming. John at FoodWishes.com has probably the easiest, most fool-proof and not scary recipe for artichokes that we have ever come across. Bonus points: it's delicious, simple and lets you taste as much pure, artichoke flavor as possible.

Is there a particular ingredient or technique that you shy away from using because it seems like a huge hassle? Let us know in the comments and we'll break it down!

This story appears in Issue 44 of our weekly iPad magazine, Huffington, in the iTunes App store, available Friday, April 12.