Bacon. Just the mere sound of that word is enough to make some salivate -- the sound of the sizzle and pop as the breakfast meat cooks to crispy perfection, its scent wafting through the kitchen with the promise of a most satisfying meal.

Bacon holds a prized spot on the breakfast table as well as in many lunch, dinner and even dessert recipes. It is for this reason that you may want to ensure your bacon frying skills are solid. There is nothing worse than getting people's hopes up with the sight of bacon, only to disappoint them with soggy and fatty strips -- or even worse, strips so charred that they are only worthy of the trash bin. There are three preferred methods to choose from, all with their own perks. Read on for guidance on how to master these techniques -- and more importantly, learn what not to do.

Traditionalist like to cook their bacon strips in a frying pan. It could be that they enjoy the sounds and aromas released during this process, or they like to cook their eggs in the resulting bacon-greased pan, or maybe that is just they way they have always done it. Whatever the reason, there are important factors to consider with the traditionalist cooking method. 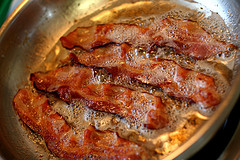 Cooking Instructions: First things first, start with a cold frying pan. If you add bacon to an already hot pan, you run the risk of scorching it. Take the bacon out of the fridge about five minutes before frying. This will bring the fat back to its natural state, making it more suitable for frying. Use a flat pan, preferably cast iron. Place enough bacon in the pan to fill it up, but not so much so that it overlaps. If it overlaps there will be sections of the bacon that isn't cooked. And if there is too much space in the pan, not enough bacon grease will be released into the pan and the bacon can burn. Once you have cooked both sides, take the bacon out of the pan. Serve immediately, or place on a plate with paper towels to collect the excess grease.

Pros: You get the pleasure of watching the bacon transform to crisp perfection. The aroma and sounds during cooking builds anticipation for the glorious meal about to occur. And, if you are not terribly health conscious, you are left with bacon grease to cook with.

Cons: There is a fairly high possibility for a subpar result -- especially if you do not feel confident in your bacon frying abilities. It is easy to burn or undercook -- and uneven cooking is a high risk. 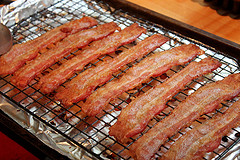 Cooking Instructions: Preheat the oven to 350 degrees. Arrange the bacon on a slotted broiler tray (or something similar) with a catch tray beneath it for the bacon grease. Cook the bacon for about 10-15 minutes, but be sure to keep a close eye on it because bacon can go from crisp perfection to charred blackness in a matter of minutes.

Pros: Since the grease falls into another pan as the bacon cooks, this version is slightly less messy and less dangerous -- there is no worry of being burned by sputtering grease from the pan. With this method, bacon comes out evenly cooked, every time.

Cons: If you do not have a slotted broiler tray, or something similar, this method is not as clean and easy as one would like.

This cooking method is for those who are all about instant gratification. If you like your bacon and you want it fast, this is the method for you. Many people say that they cannot taste the difference between this fast method and the traditional fry pan method, but that is up for some debate. One thing we can say for sure about this preparation is that it is quick, easy and requires little fuss.

Cooking Instructions: All you need to get this done is a functioning microwave, a plate and a decent supply of paper towels. Cook for 4-6 minutes, depending on the power of your microwave. We recommend layering about three paper towels beneath the bacon strips and adding a couple on top too. This is essential. The paper towels need to soak up all the bacon grease that would normally be released into a pan so that it doesn't end up all over the microwave walls.

Pros: Fast and easy. Anyone with the slightest bit of experience in the kitchen can make a decent batch. And, it does not leave you with a hefty amount of bacon grease to deal with.

Cons: Well, it has been nuked. But if that doesn't bother you, then you may have found the perfect method.

With all that said, you are now ready to cook bacon. Check out some of our favorite ways to use it.

How do you cook your bacon? Let us know in the comments below!