Sometimes, you need to make your food look as good as it tastes. Maybe it's your anniversary, or maybe you accidentally threw out your husband's favorite holey band t-shirt and he's really mad at you; whatever the reason, read on to get a few techniques to gussy up your dinner.

Sharpen your knife skills.
For me, cooking at home, the two most important knife attributes are that 1) it's sharp, and 2) it fits in my hand well; I have been forced (in class) to julienne a carrot with a giant, dull knife, and I can tell you that it doesn't work well. It doesn't have to be expensive; my $6 knife works for most things. You may also want a paring knife. 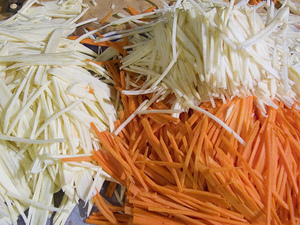 After you have a proper knife, bone up on your knife cuts. You'll use the basic cuts (chopping, slicing, julienne/batonnet, and dice) all the time, but there are a few others out there to consider, such as the roll cut or the tournée.

--When cutting something round into julienne or dice, square it off first (video) to avoid clunky, non-uniform pieces.
--If you have a long ingredient to dice or julienne, like celery or carrot, cut it into two-inch lengths for easier handling. (Two inches because that's the length of the julienne and batonnet cuts.)
--Your slicing will go much more smoothly if you stabilize whatever you're slicing; if it needs a flat edge, cut one side to flatten.
--Scoop out tomato guts before cutting if you want cleaner results.
--When in doubt, peel it.
--If you want thin, uniform slices, put down your knife and pick up a mandoline. If you want fine julienne, you'll probably need to use your knife (unless you have a really nice mandoline).

Fire it up.
The cooking part of making pretty food is mostly about patience and timing. I like to be able to throw everything together in one skillet; this does not make attractive food, unfortunately.

--When browning foods that run the risk of burning on the outside before they're done on the inside (like steak or chicken), turn your heat down to just above medium and flip often. (Bump up the heat a tad if it doesn't seem to be browning at all after several flips.) You'll get beautiful, even browning and less char risk.
--Speaking of browning, to get good color on sliced mushrooms, flip them individually instead of stirring.
--To keep color on fruit or vegetables from getting muddied, cook components separately whenever it's advisable (ie, the flavors don't need to marry). Be careful not to overcook.
--Part of the art of pretty food is knowing what not to cook. Herbs, edible flowers, salsas or salads, and raw fruit or vegetable garnishes can add great color and texture to composed plates.
--Don't forget to make a sauce or two. 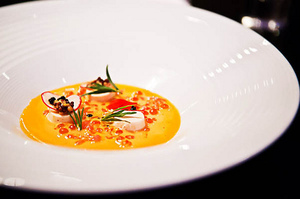 Can we just talk for a minute about the serious crush I have on Grant Achatz? Sigh. (photo by alBerto Trevino)

Compose it.
You've chopped and cooked, and now you need to plate with some panache. Color, scale, texture, and negative space all play a vital role in making dishes look their best.

Color. Beige-on-beige dishes, or dishes that are a mish-mash of every color, are less attractive than dishes with focused, clean color palettes. A tool such as a color wheel can help you plan, if you're not sure what goes together. Also, here's a rad post on color theory.

Scale. The main component(s) of the dish should be the biggest thing(s) on the plate in most circumstances. Not that they have to be huge, but the main event usually shouldn't be tiny and hiding under a mountain of salad or floating in a vast ocean of puree or sauce.

Texture. Mix smooth and creamy with crunchy and craggy, hard edges and soft edges, or neatly-chopped with rustic; texture and shape variance makes for interesting visual contrast. Having similar textures all over the plate can be a little one-note (although it can be interesting if done precisely and deliberately).

Negative space. Overloading the plate is a quick way to make your dish look clunky and unbalanced. White space is your friend.

There's a lot of ground I didn't get to cover, but those are the pretty food basics. Do you have any food styling tricks that you love?

More:
Food and Drinkfood preparationcooking how toTaste food styling
Newsletter Sign Up
The Morning Email
Wake up to the day's most important news.
Successfully Subscribed!
Realness delivered to your inbox