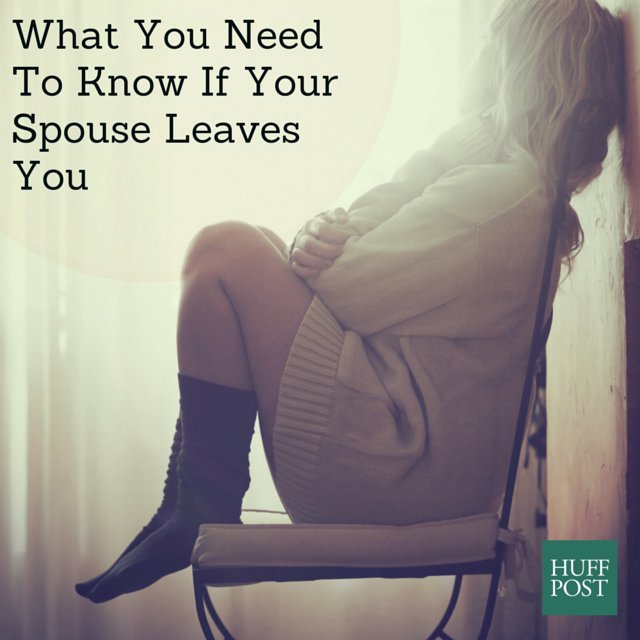 Divorce is a painful experience regardless of who initiates it, but it hurts that much more when you're the spouse who's left.

Below, divorcés and experts offer their best advice on coping when you're blindsided by divorce.

1. Find a more fulfilling life.
"I want a divorce." With one short declarative sentence, life as you knew it was upturned. You may be on uncertain footing at the moment, but life will absolutely go on sans-spouse -- take it from someone who's been there.

"When my husband left, I thought my life was over," said Stacey Freeman, a senior editor at DivorcedMoms.com. "After all, I had spent years (24 of them!) living vicariously through his life: his successes, his failures, his desires. Then -- poof -- one day he was gone."

Eventually, Freeman said she mapped out a life of her own making: "I reconnected with old friends and began reading for pleasure again. I re-discovered my career goals. Look at it this way: You weren't left. You were shown the door to a more fulfilling life."

2. Embrace your anger.
Give yourself permission to experience every single emotion that bubbles up, including complete and utter rage, said clinical psychologist Tom Rogat. Anger may seem counterproductive, but it will ultimately serve you well.

"It's a healthy and natural response when a spouse leaves," Rogat explained. "Expressing it in an appropriate, non-aggressive manner has protective qualities for the person being left. It can shield people from deeper feelings of inadequacy and helplessness which can feel paralyzing. Anger really can motivate you to positive action and reinforce healthy separation from a spouse that is leaving."

3. Keep your head up.
This may be a hard rule to live by in the beginning -- especially if your spouse left you for someone else -- but try your damnedest to handle all of this with grace. You'll thank yourself later, said writer Amy Koko, offering up some regrettable personal experience as proof.

"There were things I did after my husband left that make me want to roll up in a ball and disappear when I think about it today," she said. "I once showed up at the other woman’s door, banging like a maniac and demanding she show herself. She did not -- and I can only imagine what her poor 7-year-old daughter thought. Meanwhile, I came across like a crazy woman while she came across as the victim."

Instead, keep your head held high: "Don't stalk, don't send scathing emails. Don’t drunk text," she advised. "If you can tell yourself you handled this experience with class and dignity, you are way ahead of the game in moving on."

4. Stay tethered to yourself.
Once the initial shock of being left begins to wear off, make a promise to yourself to stay strong, healthy and grounded, said clinical psychologist Andra Brosh.

"Your safety net of marriage has been ripped out from under you so you need to create a holding pattern until you can find solid ground," she explained. "Immerse yourself in a routine that will create a rhyme and reason to your daily life with healthy, adaptive practices like yoga, meditation and journaling."

5. Get used to people saying, "You'll be OK."
During the grieving period, your mother, your divorced bestie and your nosy next-door neighbor will take great pains to remind you that you're going to be OK. That will irk you to no end until one day, you realize you really are OK, said Freeman.

"Ultimately they were right, but it was only true after I took time to mourn my marriage like a death because, for me, that's what it was," she said. "It's OK to feel sad. Or angry. Or hurt. I was all of those things, and more. Today I am OK and in time you will be, too. You'll find the best thing about being left is ultimately proving to yourself and to the world how OK you really are."

6. Focus on reality.
You'll want to believe that you can fix the problems that led to your spouse leaving. But this is one life circumstance where it's essential that reality trumps hope, said Brosh.

"You can tell yourself anything about your current situation, but the reality of what's unfolding in front of you cannot be ignored," she said. "Holding out hope for reconciliation when your partner is in a new relationship or waiting for a change of heart when they've retained a lawyer are two examples of not facing reality. Make the evidence in front of you your truth and avoid believing what in reality is just false hope."

7. Don't resort to begging.
When your spouse tells you they're no longer invested in the marriage, believe them. In the end, it will save you a world of worry, Koko said.

"If you're like I was, you will beg your spouse to stay. Most likely he or she won’t," she said. "Think of it this way, if they do, could it ever be the same? If he or she cheated, would you ever be able to trust again? Will you not be afraid when a business trip unexpectedly lasts an extra day or a guy’s night goes into the morning hours?"

She added: "I was able to keep my husband from walking out the door for two years. In the end, he finally did. What I would give to have those two years back as time that I could have used to reinvent myself, learn to trust myself, learn to love myself. Be strong. It’s in you."