It happens to the best of us. You're all set to whip up tonight's dinner, only to realize you forgot to defrost the chicken. The USDA says the best way to thaw frozen chicken is to let it sit in the fridge overnight, but what if you don't have that much time? Jeff Potter, the author of Cooking for Geeks, explains why cold water is the fastest way to defrost chicken without compromising your safety.

To speed up the thawing process, many people will opt to leave frozen meat out on the kitchen counter. Along with still being rather slow, this method isn't very safe. "If you think about leaving that chicken out on your counter top for half a day to defrost, it just doesn't sound appealing because you know it's going to spoil and go bad," Potter says.

The best way to safely and quickly defrost chicken, he says, is in a cold water bath. In the kitchen sink, submerge tightly sealed frozen chicken in a bowl of cold water. Turn on the tap to slowly run cold water over the bowl so that it continuously replenishes.

Potter uses an ice cube in the above #OWNSHOW video to demonstrate why water is a much faster alternative to room temperature air. Even though the water is cold, it still melts the ice cube much faster than the air. "Water is about four times faster," he says.

Though you may be tempted, don't use hot water to speed up the process even further. "It's going to cook it, it also will actually aid in some of the temperature things you want to avoid," Potter says.

OWN Video Own #Ownshow Chicken Cooking 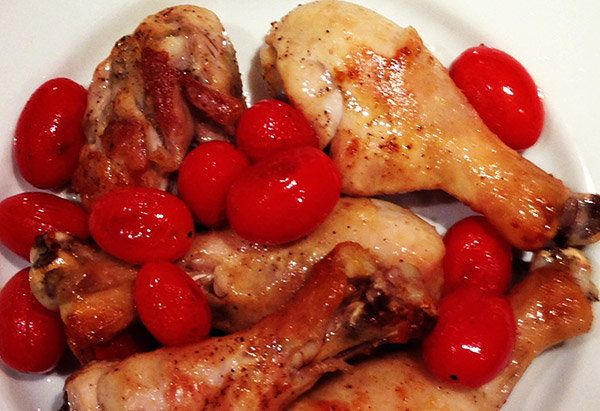 1 / 5
Roasted Chicken In 35 Minutes (No, Really)
Moist and rich-tasting roasted chicken need not be something you only enjoy on a weekend when you have hours to spend in the kitchen -- chicken parts can roast in less than 40 minutes. Use drumsticks and thighs, since they cook quickly but will stay juicy. Toss a handful of cherry or grape tomatoes onto the pan for the last 15 minutes of cooking, and then serve them alongside as a sweet, chunky sauce. <strong>Get the recipe: <a href="http://www.oprah.com/food/Roasted-Chicken-the-Speedy-Way-Recipe" target="_blank">Roasted Chicken (the Speedy Way)</a></strong>
Lynn Andriani