Your life is perfect as it is. Every aspect is exactly as it should be, pointing you precisely in the direction you're meant to go. Whether you're able to see it this way or not is a reasonable measure of your happiness, no matter what your life situation might be. What might seem like problems to some may be seen as invitations to change for others.

If you can realize that you -- and that "you" includes the whole world -- are perfect right now, you might be able to get past your guilt, find a rock in the woods and sit in silent bliss for the rest of your life. Rocks themselves do it, after all.

In India, faced with an arranged marriage, a life of family drama, and the mundane world of materialism, many people choose to put on the orange robes of renunciation and seek a deeper experience. In the jungles, caves have been filled with yogis seeking the truth in solitude and silence for thousands of years. They go to the caves, perhaps build a fire and sit in front of it, eat freshly picked berries from the forest, perhaps realize their enlightenment, perhaps not, and never leave this natural wonder. It's a beautiful life, and it is accepted by the Indian people as a noble path. This solitary truth seeking is seen as a service to the planet at large in its own, albeit indirect, way. By not further polluting the world with worries and conflict, they are becoming a part of silent evolution. The love and bliss hundreds of cave dwellers are feeling even as you read these words are emanating and rippling through the world.

True, it's not that easy for everyone. Not all of us live in a country where a life in a cave is as acceptable as a condo by the beach. Some of us have jobs in office buildings and pets and children to nourish. In our culture, it's easy to still the mind temporarily: surfing, a hard workout, sexing yourself silly, eating yourself into a coma. But full bliss won't reveal itself to you in a lasting way from a quick fix like this. But bliss can be found, even in our culture. When every action is performed with full attention, in a way that doesn't solidify the illusion of a psychological identification with the ego mind, you are meditating, merging, practicing yoga in every moment: in your car, at the supermarket,at work, at the park.

By bringing this practice of full attention and peace into your day-to-day life, the ancient yogis would say you are practicing karma yoga. Karma yoga is sometimes described as the yoga of service. However, merely being of service won't do the trick. I know individuals in the service industry, waiters, valets, housekeepers, who are not working from a place of peace, gratitude, or even contentment. They can be outwardly smiling, and inwardly angry enough to crush a penny like a railroad. Just to be clear, this does not qualify as a karma yoga practice. Karma yoga is to work selflessly, dissolving the ego and letting the divine, or whatever you choose to name that universal force, work through you. By not feeding the ego with negative thoughts or feelings, by truly focusing on what it is you're doing, and by focusing on yourself as a vehicle for the divine, you are freeing yourself in every moment of your practice.

Mother Theresa practiced Karma Yoga, although being a Roman Catholic, she probably didn't call it that. But she did express it clearly and concisely in these words, "I am a little pencil in the hand of God who is sending a love letter to the world." Mother Theresa tirelessly worked and helped to the point where the ego -- or person -- doing the work disappeared. She became the work happening though her, which she called God, thereby becoming a version of God herself. True Karma yoga is not done for the good feeling of being a good helper, it is done for its own sake: to lose the feeling of being a person and feel the energy of the divine taking over and becoming you. Those who practice Karma Yoga report the experience of limitless energy. Whereas they may have only been able to work non-stop for four hours at a time as the ego, by getting the ego out of the way and allowing work to happen through them (instead of by them), they are able to work for sixteen hours without a symptom of exhaustion. And as they work, there's a feeling of life force increasing, of love and open heartedness. Creative ideas flow steadily. This is not achieved with great effort, but by working without an ego. By getting out of the way. It's deceptively simple.

To serve without the ego, only to be a channel through which the divine operates, is true service in the context of yoga. The reward of selfless service? The joy of selfless service and inner peace. It's only from this point of surrender that you can actually do the world any good. But it's also perfectly fine to sit on a rock and contemplate bliss for the rest of your life. Both are substantial contributions.

The Pose of the Week: Anjaneyasana (Crescent Moon)

This pose begins in a lunge, the right foot forward and directly under the right knee. The left leg behind you, allow the foot to relax on the ground, and the left knee to rest on the ground as well. Try to keep your hips even and your sacrum dropped toward the ground. Bring the palms together in front of your heart in prayer pose, keeping your shoulders dropped, heart open, and sternum reaching toward the sky. Feel your head floating upward, your neck long and released. Take at least five deep breaths on each side, tuning into your body, feeling the stretch in your hip, quad, and psoas. 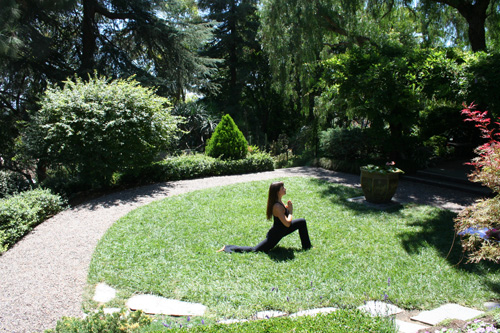 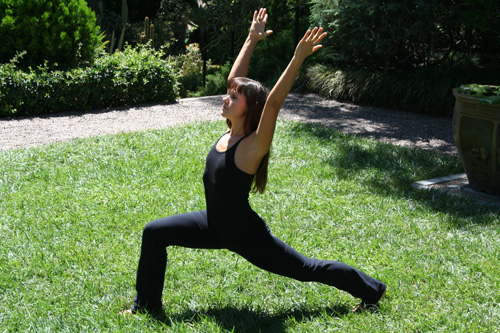