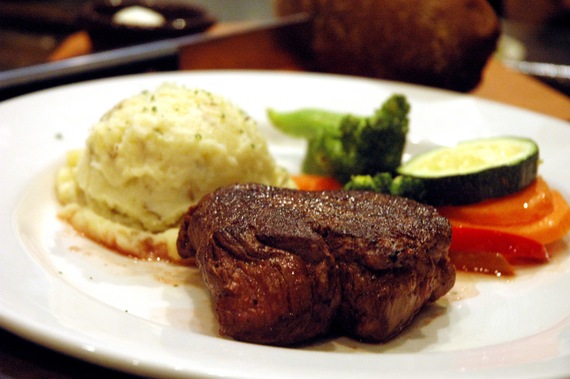 Consider these selections when dining out for a day:

This would add up to about 1,200 calories. If you are a woman 5'6" with average activity habits (a metabolic rate of about 2000), you'll lose about 50 pounds a year eating like that consistently!

However, consider what would happen if you weren't paying attention and made some slight changes: 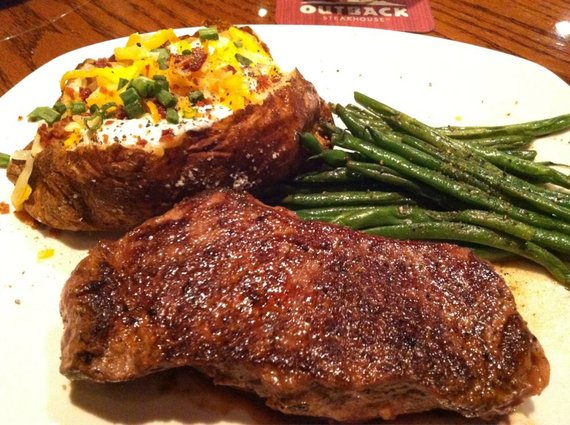 They look and feel almost the same, but with the second example, you'd be at 2,700 calories and gaining 50 pounds a year instead of losing them!

For a population facing an exploding obesity epidemic, the world of fast food, restaurants and convenience food is a minefield, with caloric nuclear bombs everywhere you turn. It's a miracle we all aren't over 600 pounds.

Consider this: Did you know that you could gain 100 extra pounds (!!) in four years by overeating as little as one latte per day? It's true! If you are out of balance, over your metabolic rate consistently by 250 calories per day (an average latte), you'll gain 25 pounds a year, or 100 pounds in four!

The science is in. Our body burns calories each moment we are alive, awake or asleep. Our organs, muscles and cells metabolize fuel each second we live and breathe. There's no mystery in knowing why we gain or lose weight. It's a matter of the energy or calorie balance. Eat 3,500 more calories than you burn and you store them as fat and gain a pound.

Most of my clients who are obese first got that way by being only a little out of balance, creeping up on the scale 10 pounds per year. That amounts to eating only 100 calories more per day than you need, the number of calories in an apple or banana! How can you avoid eating too many calories, and way more than 100, with the way we eat in this country?

When you think about it, with the way food is pushed at us, it's a miracle that we aren't all morbidly obese (70 percent of us are now clinically obese). A Big Mac is 563 calories. A Cinnabon Classic Roll is 879. How hard do you think it is to go over a 2,000-calorie budget when breakfast at Denny's can be 1,000 calories and lunch at McDonald's can easily be 1400 or more? One of the shrimp dishes at Ruby Tuesday's is 1,475 calories! They have a salad that's over 1,100!

So how is that 30 percent of us are not overweight, and some don't even have to try to stay slim?

This is a more startling observation than the obesity epidemic: Many people maintain the same weight, year-in and year-out, without even trying. I find that miraculous. Think about it. A person who burns 2,000 calories per day burns 730,000 in normal activities through the year and consumes 730,000 to fuel that activity. To gain or lose a pound it would be because they were off by no more than 3,500 calories in an entire year! That averages about 10 calories per day! How could a person match their consumption to their utilization that closely by accident, without even trying?

The answer, of course, is that there must be some sort of inner process going on, like unconscious programming, that tells them how much to eat and when to stop so that they end up eating only enough to meet their needs. Dietitians have always told me this and that I should listen to my body. I tried that, but all I ever heard was, "I need something to eat" and "more, more!" If such a self-limiting thing ever existed in me, that programming was deleted long ago, probably by a combination of conditioning, all the food nuttiness in my environment, and 25 years of yo-yo dieting, gaining it all back and more after each attempt.

How to attain and maintain a proper weight automatically even when eating out.

The secret to permanent weight loss is in creating new programming -- habits you can live with and enjoy that will produce the weight control you want -- habits that will become automatic. It's like getting addicted to gratifying undereating instead of overeating. For this to happen, these conditions must be met:

For years while I was overweight and obese, I kept looking for ways to lose weight that were easy. I avoided anything that sounded hard, and paying attention to the calories sounded hard. Or, I'd look for ways to get someone else to do the work and make me successful. I had lost faith in myself. Avoiding doing the work myself just made me gain more weight as the years and failed attempts dragged on.

I get clients who think learning to control their weight should not be as much work as learning to pass tests for professional jobs or getting good at a sport or music. That's a big mistake. You'll never be successful with weight control until you decide controlling your weight is your first priority and you're willing to work harder to develop that ability than the effort you make to grow professionally or highly skilled in sports or the arts.

Quit being mad that it's not easy for you like it's easy for those people I talked about who maintain the right weight without even trying. If you are like me, you are one of the people who seem to gain weight naturally and have failed to succeed many times. You need to accept that you'll never be like them.

However, I think it's better to be like us. All living things have the ability to learn and change. You have within you the power to get better. There is within you an incredible mechanism that helped you learn to speak and use a vocabulary of thousands of words. That was in you even before you knew who you were. You have within you the power to heal wounds and broken bones and get better when you are sick. That's not your will power, but another kind of power at your disposal when you don't lose the faith that it's there (like I did for a while). I think it's better to be like us than those people who never had the problem. We can solve this problem and when we do, we have a strength, knowledge and wisdom that they may never know.

All restaurant chains with 20 or more units must now post the caloric values in what they serve. Most have that info on their website too. Restaurants who want our business will provide that info even if they don't have 20 units.

We need to be like the formerly obese people, now successful in weight control, who are studied by the National Weight Control Registry. They do not put anything in their mouths without knowing the caloric value. Eating without knowing the caloric cost is like charging up stuff you like at the mall without looking at the price tags. With either practice, disaster is the result.

So, start by getting to know the amount of calories that you are putting in your body. When you recover from the initial shock, you'll be ready for the next step, which is to plan ahead. All formerly obese people who have become successful, plan ahead. They don't eat spontaneously or wait until they are at the table with the menu of all those tempting things. They know ahead of time what they are going to order, and with the menus on the websites these days, it's much easier than it was years ago.

That will get you started in the right direction. You can switch from my example of eating out to gain 50 pounds a year to losing 50 pounds this year. Believe me, it's worth it!

William Anderson is a Licensed Mental Health Counselor who specializes in weight loss, eating disorders and addictions. He solved his own long-time weight problem, losing 140 pounds 30 years ago and has kept it off since. He is the author of The Anderson Method.