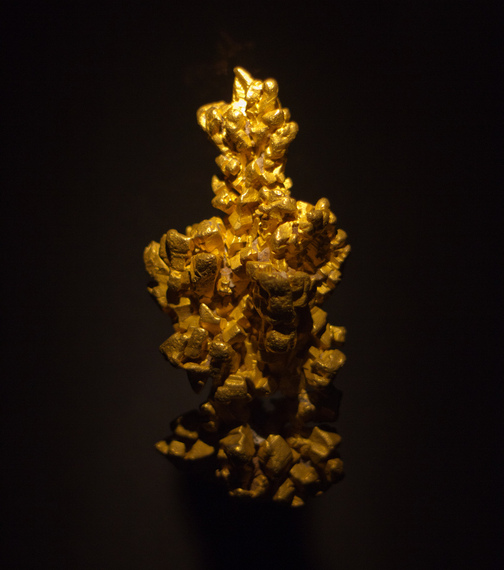 I've got good news and bad news. It's about creativity. Well, mine anyway. After many years of alternately experiencing both droughts and monsoons of creative vision, I have miraculously discovered from where to harvest my most creative self.

I liken it to mining for gold.

While no two nuggets are alike, if I'm really lucky, they are hefty chunks. Others are tiny slivers--gossamers even--so slight that most people wouldn't be able to see their true value with the naked eye. Each is multi-faceted, sharing characteristics that are, at times, even contradictory. Some are so smooth they could cast a reflection. Or they're scruffy or even prickly with razor sharp points. The dirty crevices caked with black deposits found in nuggets of gold always seem incongruous to their opulence. Let's not forget the shimmery twinkly parts, gleaming with luster like a wink from a star. To me it makes no difference what form or size these idea nuggets take--they're all precious.

Okay. Here's the bad news. There's only one way I can source these clusters of creativity. For me, the most successful excavation happens under one condition: when I'm in a horizontal position in a half-sleep. No joke. I discovered this years ago while writing my first novel. I'd sit for hours at my computer into the late night, exhausted and weary, often with a steady stream of drool leaking from the corner of my mouth. I'd try to push through the zombie state because these were hours I needed to make writing progress−my young children were asleep. But I'd be too spent to feign creativity or anything writerly, so off to sleep I'd go.

In bed, when I'd feel myself slipping off to a deep slumber, someone from my novel, usually the protagonist, would urgently throw open the door to my semi-consciousness. My first thought was, "What the heck are you doing here?" Then, "Where have you been for the last three hours? Now you've got something to say?" I'd argue with the protagonist a bit, but it was clear that a gold nugget had just been plopped on my pillow.

Well, years have passed and these inopportune but welcomed visits of creative clarity have become predictable. So much so, I can safely call it my technique. One in which I use even in the middle of the day. If, say, after toiling at my computer for an hour or two, without progress, I actually start to feel drowsy. I get up from my desk and lie down on the couch, snuggle up to my favorite pillow, and drift into a half-slumber. And voila! I strike gold. In the form of great dialogue--so natural it feels like I'm eavesdropping--or a shocking plot twist or the greatest cliff-hanger chapter ending ever.

Maybe this sounds strange--but it makes sense that in a world with so much buzz, distraction and sensory assault, one needs quiet in order to think and create. I urge you to try this at home!

No longer do I look at creativity and inspiration in the same way. Noise ignites inspiration, quiet ignites creativity.

This brings to mind something Anna Quindlen said in the Newsweek piece, Doing Nothing is Something. "You can't write poetry or compose music or become an actor without downtime, and plenty of it, a hiatus that passes for boredom but is really the quiet moving of the wheels inside that fuel creativity."

My kids are now used to my dozing productivity. In fact, the other day my daughter and a friend were walking through our living room where I was curled up under a velvet blanket. The friend whispered something to my daughter. Through my semi-conscious state I heard my daughter say, "Oh, don't mind her, she's just writing."