Most people understand there's a difference between selling a puppy and selling a toaster oven, but do our laws? It depends where you look.

Across the country, puppy mills -- which in many cases are legal -- are allowed to put profits ahead of pet welfare in the sole interest of their own profit-driven desires, churning out puppy after puppy like household appliances on a conveyor belt. 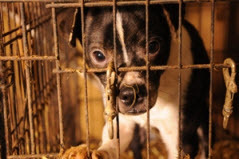 The good news is that states are finally addressing cruel breeding and animal selling practices, as well as strengthening industry accountability, with a variety of laws designed to protect and save lives. While some of the laws are stronger than others, they're all no-brainers to those who see animals as more than products, yet many state legislatures are still resistant to regulation. Two current battlegrounds are North Carolina and Illinois, but many more states are tackling these issues.

You can play a part in ending puppy mills by refusing to buy anything, including both dogs and pet supplies, from a pet store that sell puppies, as well as supporting enactment of strong state humane laws. While the federal Animal Welfare Act sets minimum standards of care, these standards are grossly inadequate -- enforcement is underfunded and too often lacks teeth. As a result, state and local laws often offer better protection for these animals.

Monitoring progress in every state provides a good snapshot of how attitudes are changing nationwide. Here's a very current overview of recent animal welfare struggles and wins in state legislatures across the country as well as at the national level:

This bill, championed by tireless animal advocate Rep. Brenda Kupchick, grew out of a task force created by a statute in 2013 to examine possible legislative solutions to the puppy mill problem, including a full ban on the sale of puppy mill dogs in pet shops. A compromise, the present bill instead bans the sale of dogs from USDA licensed facilities that have certain violations of the Animal Welfare Act

Unfortunately, this leaves out puppies coming in from overseas. That's why we're still working to encourage the USDA to finalize a federal rule requiring non-U.S. breeders who import puppies to the U.S. to provide certification that each dog is in good health, has received all necessary vaccinations, and is at least six months of age.

Of course, the puppy mill and dog breeding industries are fighting tooth and nail to keep their industries alive with little or no accountability, which is why we need to be active and vigilant. Though contacting your representatives may seem like a futile effort, we've seen momentous change come from a loud community voice.

You can also help by taking the "No Pet Store Puppies" pledge not to buy anything from pet stores that sell puppies, and by encouraging others to do the same. Pet stores typically purchase puppies from USDA licensed breeders, many of whom are frequent violators of the federal Animal Welfare Act, and are allowed to sell even after repeated violations, including denying veterinary care to injured animals, keeping them in filthy and dangerous environments, performing invasive surgeries on their own animals without veterinary licenses, and, in some cases, shooting their unwanted dogs.

Puppy mills wouldn't be the first inhumane industry to be stopped, banned, or criminalized thanks to public pressure. Child labor, animal fighting, sweatshops, horse slaughter, lead paint, and shark finning are all examples of one-time commonly accepted practices which now fall below the standards of civilized behavior. Strong laws, personal action, and collective outrage can make the price of doing this kind of business too high for even the most motivated entrepreneur.

The bottom line is this: Humane treatment is not our gift to animals; it's our obligation. If your state isn't doing enough to keep breeders in check, urge your elected officials to do more. If your community is tolerating puppy mills and pet stores that sell puppy mill puppies, bring the true nature of those businesses to light.

And if you think this is a problem that can't be fixed, think again.