Who exactly, precisely, specifically do you consider to be a quality guy? Figuring this out now doesn't mean that you shouldn't be fluid and open to change, but it helps to at least start with some objective in mind. I'm not going to try to turn you into some high-maintenance, hyper-picky naysayer. I just want to help you stop kissing frogs and start finding your man. So let's set some standards and start learning to reject those guys who fall so far below the bar that they make inmates look good. This is all about beginning with the end in mind (as Dr. Stephen Covey would say) and not bothering with a hound dog when what you really want is someone with a pedigree -- or at the very least, someone who's housebroken and won't gnaw on the furniture!

Look, I understand the appeal of the hound dog. I've heard that ol' boys' song and dance many times before. You have to understand: The qualities that initially attract you to a man are not necessarily the ones that will make him a good long-term partner. If you are genuinely looking to settle down and you still don't understand that the guy chasing you may not be the person you want raising your children or being there for you through thick and thin, then it's time we get you a plan, an emotional compass, and start changing your selection criteria immediately.

Does that mean there's anything wrong with somebody who's fun on a date, a good dancer, handsome and supercool? Absolutely not. In fact, you may consider these conditions to be necessary and they may be, but that certainly does not mean those traits are sufficient to sustain what you're looking for.

I don't mean to make this sound like a job with no fun, spontaneity or intrigue -- because this should be an exciting process. But we might as well make sure you are enjoying yourself with the right kind of guys, that is, those who have at least some chance of being "the one." That means you need to stop spending time around people who you absolutely, positively, drop-dead know for sure are not going to lead you anywhere.

Don't go barhopping just because you are scared to be alone. If what you are looking for is a meaningful, committed partner, then you are going to have to stay on the relationship highway and quit going down the doesn't-call-you-back dirt roads, the better-than-nothing dead-end streets, and the he-ain't-much-but-he's-mine detours. If you want what you want when you want it and what you want is a real, no-kidding, quality partner and when you want it is now (or yesterday before noon) instead of five years from now or never, then you don't want to confuse aimless social activity with social productivity.

Here's an attitude adjustment for you: Decide right now that you would rather be happy alone than miserable with somebody else. Decide that you will not choose some guy out of fear that you may not get a better choice later. For example, if you know a guy who drinks too much, has a difficult personality and hates kids, he's no good to you unless you're writing a country song. He may be fun for the night, but there's no chance for a future, because he has deal-breaking characteristics or values. And you need to be paying attention to those and hitting the door even if it means going home alone.

If you haven't stopped to give your needs and wants some serious thought, you probably wouldn't know Mr. Right if he walked up to you wearing a name tag. You don't fit with everybody, and not everybody fits with you. There are people out there who will drive you crazy and vice versa. I want to make sure that you have a clear vision of what you want and what you don't want -- what you absolutely cannot live with versus, "Yes, this is the foundation on which I can build a future."

Here's a hint: What you want is not necessarily Brad Pitt, George Clooney, Gandhi and Bill Gates rolled into one. After all, as he gets older, he's likely to have Bill Gates's looks and Gandhi's money. You're not going for some dream guy here, because going for a dream guy is a good way to excuse yourself from the game -- just set the bar so high that nobody measures up, then shrug your shoulders and say, "That's why I'm alone." No, we are going to get in there, and be realistic and find somebody who has a chance of being the right kind of guy. Then we'll create the right kind of experience.

Modified excerpt from Love Smart: Find the One You Want - Fix the One You Got by Dr. Phil McGraw (Free Press, 2005).

PHOTO GALLERY
The Truest Things Said About Love
Download
Calling all HuffPost superfans!
Sign up for membership to become a founding member and help shape HuffPost's next chapter
Join HuffPost 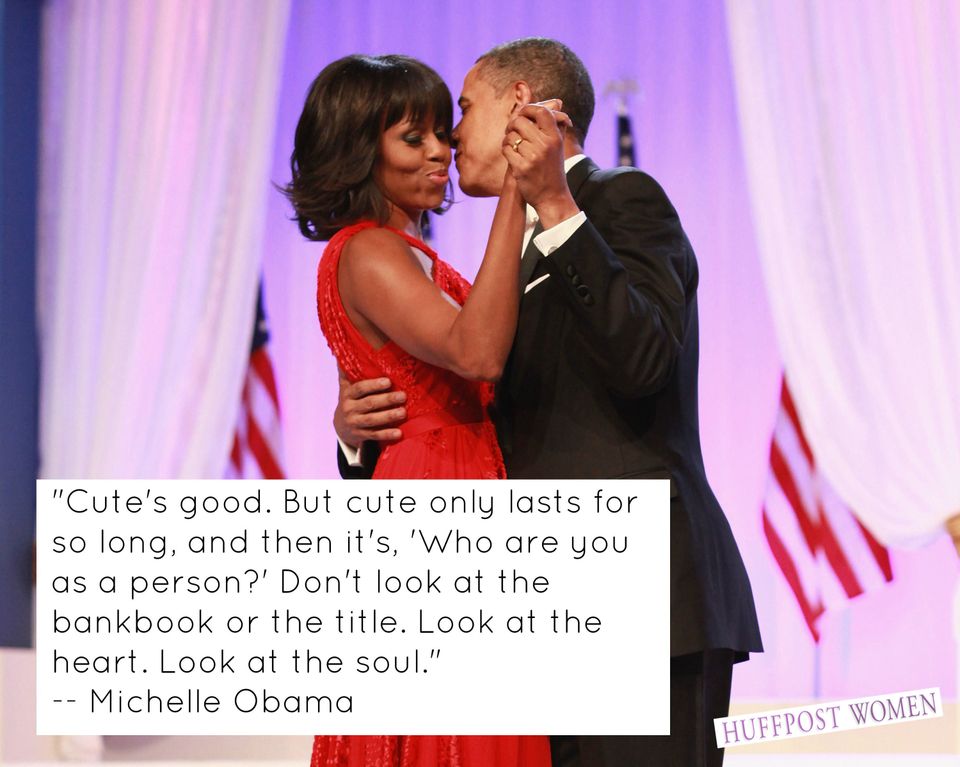