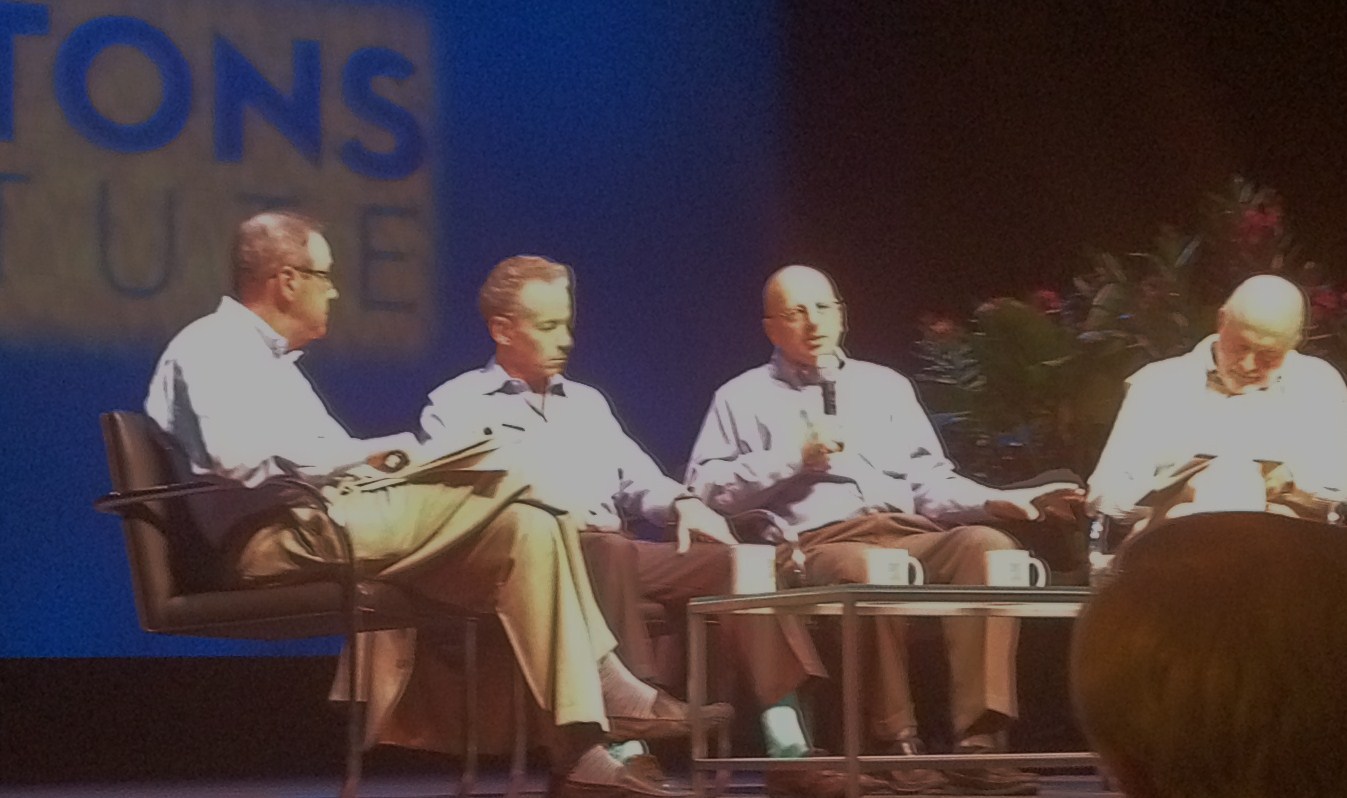 Surrounded by trees and gardens, Guild Hall in East Hampton, N.Y. is a serene place. On Sunday afternoon, I await a worthy "bipartisan discussion" launched by the "Hamptons Institute" on "America's Economic Future." The Roosevelt Institute is involved, so I expect some comparisons with FDR's first term.

Joe Nocera, Op-Ed columnist for the New York Times, moderates the program. He starts the buzz by asking the panel's views about Dodd-Frank and what else can be done to "rein in" Wall Street. Is the anger at Wall Street justified?

Ken Miller, President/CEO of Ken Miller Capital and a Democrat, praises the passage of Dodd-Frank and endorses the Treasury team. But he regrets that Dodd-Frank addresses only symptoms, not causes. It won't, he says, solve the basic problem of overleveraging. He voices gloom about regulation because it has to be ubiquitous to work. He thinks the culture of Wall Street, its "short-termism," must be changed. He thinks the Board of Directors of Lehman should have been more vigilant. But Washington is too timid to tackle this or any other thorny problems in 2012 because a small number of voters in swing states will decide the presidential election.

Cyrus Amir-Mokri, Assistant Secretary for Financial Institutions at the U.S. Treasury, firmly endorses the policies of his employer. The Treasury is implementing Dodd-Frank to strengthen regulation and open up "shadow banking" into the "light of day." Even Republicans, he stresses, agree that the financial sector requires better, enforced rules of the road. Federal regulators seek to control the negative externalities that come from financial risk-taking, especially at institutions "Too Big to Fail." Dodd-Frank is linking risky behavior to clearer consequences for shareholders and management, such as capital rules, liquidity rules, risk management principles, and counterparty disclosure. Washington is scrambling to restore confidence in a system that has lost it. The economy has been underperforming, but jobs have been growing every month since the initial losses following on the Bush 43 Administration.

Joseph Perella, Chairman and CEO at Perella Weinberg Partners, the designated Republican, is the one who keeps me on the edge of my seat. Sure, he refers vaguely to President Obama moving "too far to the left." But for the rest he hammers away at the dangers of the existing Wall Street setup. We can't go back to the Glass-Steagall wall between banks and the rest of the financial system, he thinks. Not just because the economy has become too complex. No, a huge problem is that Wall Street has morphed tragically from risk-conscious partnerships to return-hungry public ownership. Like Ken Miller, he despairs of regulation working. He summarizes the prevailing Too Big to Fail system succinctly: "It's like a Las Vegas casino where the croupiers keep their winnings but the House takes the losses."

Containing ambition, he said, is hard. One way is to enforce a steep price for failure. Shareholder activists are helping by seeking to limit management compensation when returns are low.

The three panelists list other culpable parties, but they clearly respond to Nocera's question about whether the anger against Wall Street is justified with a "Yes." Occupy Wall Street would be pleased.

In support of their answers, they could have cited that morning's New York Times, where Gretchen Morgenson exults in the truth-telling of Neil Barofsky's new book, Bailout (Free Press). Barofsky was the special inspector general for the Troubled Asset Relief Program (TARP). Here's a snippet from Morgenson's review:

Government officials, [Barofsky] says, eagerly served Wall Street interests at the public's expense, and regulators were captured by the very industry they were supposed to be regulating.

This story is familiar to readers in the 1970s of the research instigated by either Ralph Nader or Milton Friedman. But it is, as Morgenson says, "deeply depressing."

A former president of our host Guild Hall, William H. Woodin, was FDR's first Treasury Secretary. I note this and ask the panel how FDR got so much done in his first 100 days. Nocera answers that question first by saying that the Pecora Commission took a couple of years to stir up the public and the Congress into the 1933 reforms. He then questions whether FDR's innovations were all so good, using as an example the Bank Holiday. But surely FDR pulled off a miracle:

Yes, the Glass-Steagall wall was taken down in pieces (e.g., 1999, 2000) and within a few years the global financial system came down as well.

But the deposit-insurance half of the Act, promoted by Rep. Henry B. Steagall, is still in place in the form of the FDIC.

As Joe Perella is leaving, I ask him if he has figured out how the Canadian regulators managed to keep their big banks from gambling with depositors' money. Four years in a row, the World Economic Forum has rated Canada as having the world's soundest banking system. Why?

It's very simple. The Canadian bank regulator is represented at the Board meetings of the banks.

I confess I could not find documentation of that approach to fixing the banks in the Brookings paper on the topic or in any other source I consulted during an online search. But Canada's Office of the Superintendent of Financial Institutions is definitely a model for three reasons:

The idea of putting regulatory representatives on the boards of U.S. banks deemed too big to fail makes great sense to me.