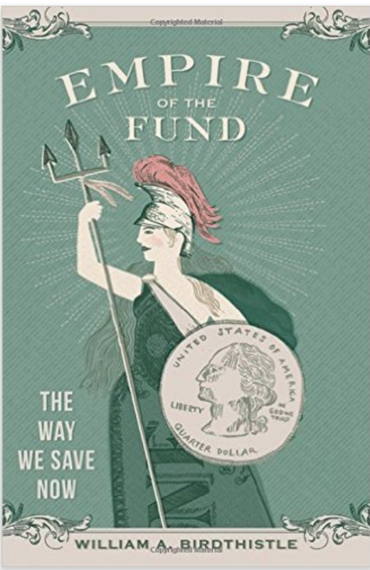 If I could assign every politician running for office this year one book to read, it would be Professor William Birdthistle's Empire of the Fund: The Way We Save Now, the story of the avalanche of money poured into mutual funds and the staggering inadequacy of the results as the baby boomers approach retirement. He calls it "the richest and riskiest experiment in our financial history."

The book is witty and accessible, citing sources from Jane Austen to Angry Birds and Ronco infomercials. He even has a rap video. But it is a comprehensive and powerful indictment of a system that has been distorted to look like pure capitalism when it is really subsidizing an increasingly ineffective financial services industry.

In an interview, Professor Birdthistle discussed some of his findings and conclusions. (Interview edited for length -- for the complete version see here.

Over the past few decades, we have launched massive financial experiment: millions of Americans have lost pensions and received defined contribution plans like 401(k)s and 403(b)s, whether they like it or not. The hypothesis is that millions of investing amateurs with jobs, families, but little training can successfully manage their life savings for decades in a system dominated by investment firms, like those that so vigorously oppose the fiduciary rule.

But the evidence so far says we're not doing well with this project: one-third of all Americans have zero savings for retirement, and even those on the cusp of retirement have nest eggs that will provide an average of just about $7000 a year.

So we've seen this massive cultural shift in just a single generation with almost no corresponding change in the way we train people to manage their own life savings or provide them with a structure that encourages their success. Attempts to ease enrollment in 401(k)s plans, to lower fees in those plans, and to stamp out conflicts of interest routinely become pitched battles with years of legislative and judicial conflict.

To assume we're all going to thrive in this brave new world of financial autonomy is willfully obtuse -- or financially cynical. Humans are pretty good at learning how to do things with practice, but as Richard Thaler notes, "barring reincarnation," we only get one chance to succeed at saving for our future.

I think we need to embrace as many complementary ways to improve this process as possible. So, yes, we definitely need more auto-enrollment and auto-escalation, so that people begin this project as early as possible. But we also need to copy the lessons of America's most successful companies, such as Wal-Mart and Amazon, by harnessing the bargaining power of millions of individual investors to enjoy economies of scale. If we invested as a massive group, such as through the Thrift Savings Plan, then we could demand the quality of the best investment firms, working for the lowest possible fees, and delivering the most scrupulous performance.

How can investors find the hidden fees in their mutual fund investments?

The problem with finding fees in a mutual fund investment is that there are so many of them. The obvious fees -- such as those for management, distribution, 12b-1 plans, administration, and so on -- are set forth in the fee and expense tables of fund prospectuses. With a little Googling, those tables are relatively easy to find. But they're not very easy to read.

First, the disclosure for many funds is often consolidated into a single prospectus, which means an investor will have to know the specific name and share class of their investment in order to find and interpret the correct table. In my book, I include a single prospectus that covers 17 different funds with at least 4 different share classes each. Second, the tables are less easy to read than one might think -- they can include waivers that may apply for unknown periods. The presence of several footnotes on those charts is a pretty good clue that they're not simple.

The less obvious fees -- such as those for the fund portfolio's brokerage commissions, for soft dollar arrangements, and other arcane operations -- can be buried in Statements of Additional Information, which are impenetrably thick documents often found only online. And there's no easy trick to figure those out.

Will the new IEX exchange limit the front-running abuses giving special treatment and higher returns to some investors over others that you describe in your book?

Yes, the IEX looks like a promising trading venue for mutual funds and their trillions of dollars of our savings. Just like we, as individuals, need to harness our bargaining power to demand better investments, mutual funds need to wield their own clout, in a market haunted by hedge funds and high-frequency traders, to improve their own investing. And, of course, if funds can avoid losing value by being front-run in the market, they should be able to pass those savings down to their shareholders: us.

Are you advocating a pension equivalent of the "public option" many people want for healthcare?

I'm advocating opening the Thrift Savings Plan to all Americans, so that everyone -- even the self-employed, the unemployed, and those employed at small businesses -- can benefit from an excellent plan with a concise menu of prudent funds managed by a sophisticated adviser, BlackRock, at astonishingly low fees (less than 3 basis points or 0.03%).

Now, depending on who we'd like to please or offend, we can describe that proposal as either (a) a "public option" that makes a great government plan available more broadly or (b) a way to make individual investing more successful using bargaining power, economies of scale, and other tools of capitalism. Obviously, (a) might appeal more to the stereotypical Democrat, but candidate Clinton focuses on expanding Social Security; and (b) might appeal to the stereotypical Republican (Marco Rubio did once endorse the idea), but I'm not sure what candidate Trump's retirement policy is. Perhaps we can take some comfort, in this bizarre presidential campaign, from an idea that might offend both sides.