The typical landlord-tenant relationship is fraught with tension. Disagreements abound over every aspect of the rental process, from payments to repairs, leases to drop-ins. On What Does the Internet Think, a site that uses linguistic analysis to determine how positively something is viewed online, landlords have a negativity rating of 98.9 percent -- higher than headaches (95 percent), taxes (79 percent) and even adultery (just 51 percent!). 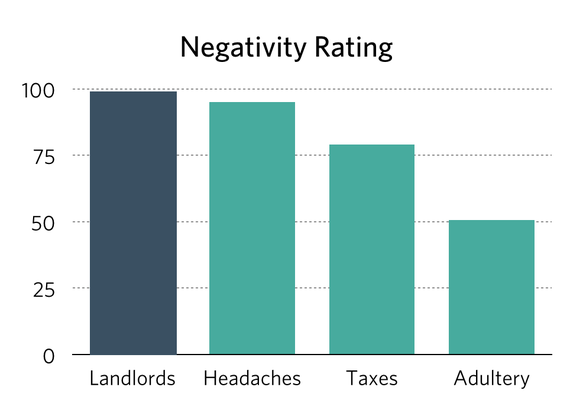 And tenants aren't viewed so positively either. At Castle, our property management startup, we surveyed hundreds of landlords, and their top complaint about landlording, by a margin of over 2:1, was some variation of "bad tenants."

Just some of the many synonyms for "bad tenants" we received.

But most landlords aren't bad people, and most tenants aren't either. So how does this happen? Is there something about property rental that turns normal people into assholes?

Of course not. As it turns out, behind most supposedly "bad" tenants (and bad landlords) lies a more nuanced story. When we dug further into each report of a bad tenant, we found that most of the conflicts could be traced to a breakdown in communication.

For example, here are some of the "bad tenants" landlords described to us:
And here's what was really going on with each of them:

In each of these cases, the bad behavior at issue was really caused by poor communication.

Landlording is a strange business. Tenants and landlords share one of the most intimate things two people can share: their home. Of course, not every landlord-tenant dispute is a result of poor communication; there are certainly situations where a tenant knowingly breaks the rules, or doesn't come up with the rent. But so much stress, anxiety and conflict between landlords and tenants can be avoided when both parties lay out their expectations explicitly at the beginning of the relationship.

Detroit landlord and co-founder of Castle (entercastle.com), a new approach to property management.