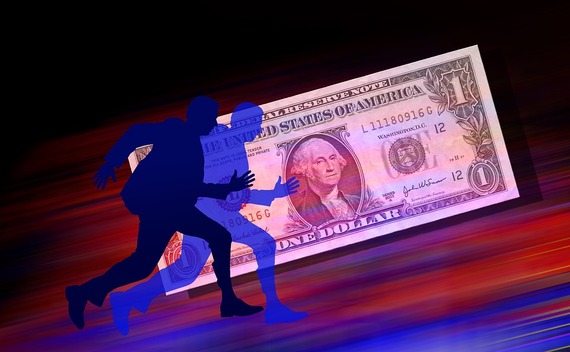 "I am having an out of money experience." -- Author Unknown

That quote might be funny, but actually I think it reveals a problem that's become epidemic in the U.S.

Not that people are broke.

But as a country, we've bought into a broke mindset.

Here are some recent statistics on Americans' attitudes about their finances from research by Pew Trusts, CNBC and Northwestern Mutual:

57 percent say they aren't prepared for a financial emergency.
6 in 10 Americans just break even or spend more than they make every month
71 percent of Americans worry about having enough money to cover expenses
39 percent worry about their ability to pay their rent or mortgage
68 percent make less than $25,000
76 percent have less than $10,000 in assets (not including their house)

But here's the statistic that concerns me more:

In 2009, only 40 percent of people believed people could become wealthy if they worked hard. In 2015, that number dropped to 23 percent.

In other words, 77 percent of us believe that, no matter how much effort we put forth, we will never become wealthy!


In my articles and my (neuro linguistic programming) trainings, I often talk about underlying limiting decisions and beliefs that can hold us back. But when 77 percent of the population holds that same limiting belief, it's like a super-virus that has become resistant to normal antibiotics! It becomes a "truth" so prevalent that the energy and focus of an entire population can be deflated.

How many times have you heard Henry Ford's quote: "Whether you think you can or think you can't, you're right." Mr. Ford may not have studied psychology but he was spot on. What you believe -- consciously or unconsciously -- has a direct effect on your actions, your emotions and even what you are able to perceive.

The question is: Would you rather be in the 77 percent or the 23 percent?

Try this experiment:
For the next several minutes, walk around with the thought that, "Nothing I do will bring me the success I desire."

Convince yourself thoroughly of this thought. Imagine your boss or a parent telling you that "Nothing you do can bring you the success you desire."

Imagine seeing this blasted on CNN or coming from the pulpit on Sunday morning.
Imagine a thousand bumper stickers proclaiming the same thing.

How do you feel?
Are you motivated to punch it at work or come up with new ideas to get ahead?
Are you eager to start your day?
Do you think you would even see, much less believe, any opportunities that popped up for you?
That's what the 77 percent is experiencing.

Next, try on the belief of the 23 percent:
"I can succeed and what I do contributes to my success." (If your underlying beliefs have been more in line with the 77 percent, it may take a bit more effort to convince yourself of this.)

Imagine the people you trust saying it to you: "You can succeed and what you do absolutely contributes to your success!"

Imagine your boss or clients reaffirming that your efforts will make you successful.
If you still can't feel that statement as true, think of a successful person you know.
Step into their shoes and imagine yourself as that person, feeling, thinking, walking and talking as they do.

How does that feel?
How motivated would you be to tackle whatever is in front of you?
How confident would you feel about finding and optimizing opportunities for yourself?
Is it possible you'd have a better shot at achieving the success you want to achieve as this 23% person?

The good news is that you get to choose how you think and what you believe which in turn will shape your action and outcomes.

Choosing a belief that flies in the face of a cultural limiting belief that is epidemic is not easy. Rather than simply swallowing the "wisdom" on the street, you actually have to think differently.

Here are we three steps that you can use right now to create lasting change, whether it's changing a belief, a habit, or a pattern of behavior:

Studies have shown that affirmations of positive beliefs can actually backfire if they slam into deep-seated negative beliefs.

Once old beliefs are eliminated at their root, you can safely insert a belief that will support what you desire.

Within this step, it's also important to set meaningful goals to pull you forward.

#2 Take action. In past articles, I've talked about the power of the unconscious mind, how it will focus on whatever is important to you. However, if you simply say you want something but take no action toward it, your unconscious assumes you're not really serious.

Even if you aren't quite sure what to do, find small steps you can take NOW. Maybe it's learning a new skill or researching a new business. Maybe it's making that one extra call per day or offering to assist on a new project. Whatever it is, act on it.

#3 Remain focused on your desired outcome and reframe any obstacles to keep your unconscious moving forward.

On every journey, even if it's just from your living room couch to the front door, you'll find "stuff" in your way. The dog lying in your path or your kids toys on the floor aren't signs that you shouldn't go to the front door.

They're merely things you need to deal with as you keep heading toward your goal. "Reframing" any obstacles means to think about them in a different way. It's learning to say, "Wow, I really learned a valuable lesson just now" rather than "What a horrible mistake I made!"

I encourage you to join the thinking of the 23 percent and know that you have the power to create the financial success you desire!

"Thinking is the hardest work there is, which is probably the reason so few engage in it." -- Henry Ford

Byline: Matthew B. James, MA, Ph.D., is President of The Empowerment Partnership. Author of several books, Dr. Matt has trained thousands of students to be totally empowered using Neuro Linguistic Programming (NLP), Huna, Mental Emotional Release® (MER®) therapy. To keep in touch with Dr. Matt follow him on Facebook or visit his blog at www.DrMatt.com.