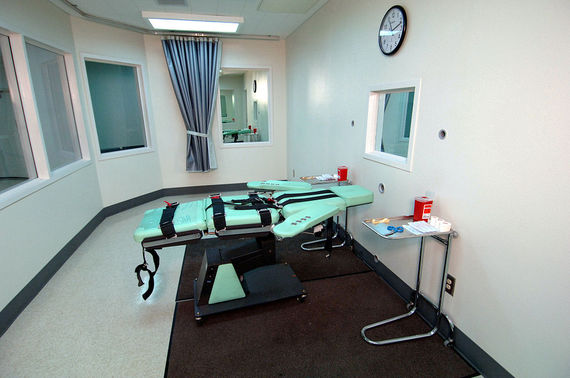 In the last few weeks a number of my friends and colleagues have taken to social media, blogging, petitioning the state and even making a powerful short film of Kelly's own words. They point to her participation and completion of a brilliant, inspiring theological education program at Arrendale State Prison, administered and staffed by many gifted professors and young seminarians from Candler School of Theology at Emory University. Each of these passionate campaigns speak to the remarkable personal transformation that has occurred in Kelly's life, a compelling and profound conversion to the way of Christ and his peaceable Kingdom. Every tweet, interview, facebook post and letter speaks to Kelly's willingness to not only pursue peace but to minister to other inmates, sharing hope and light from a place of internal resilience. Their argument is that Kelly's life is worth saving -- and they are right.

I have signed the petitions, shared the facebook posts and petitioned the Governor's office for clemency. I am grateful for those who have chosen to lift their voice on Kelly's behalf and I am fearful that in the process we have set our sights far too low.

Bryan Stevenson, the founder of the Equal Justice Initiative and a recipient of the MacArthur "Genius" Grant, says it this way.

The argument in Kelly Gissendanner's case is evidence of a transformed life, a repentant and contrite heart and a converted individual, who does not seek exoneration, but simply the mercy of being able to continue living. The argument is a moral one -- that it is not right to execute someone who has gone to such great lengths to examine and atone for her sins. The problem with that argument is it presupposes that it is moral to kill at all.

In a recent interview with the Guardian, Stevenson exposes the flawed logic. Responding to the parallel argument for rape -- that the State would not willingly rape a rapist, he says:

The issue of capital punishment is fraught with conflicting ideas of what constitutes justice, and yet evidence suggests that retributive justice is neither a crime deterrent nor a means of absolution for victims and their families. The recent decision by several pharmaceutical companies to cease producing the compounding drugs used in lethal injections have brought back the natural horror of the act of killing someone. While some states have considered bringing back the electric chair or even the firing squad, the State of Georgia has taken measures to protect the identity of the chemicals used to avoid further scrutiny. When executing someone no longer looks like someone simply falling asleep, we are confronted with the grotesque reality of what is required to take the life of another human being.

In less than 100 hours Kelly Gissendanner will likely face this horrific reality. We may affirm the sincerity of her conversion, lament the loss of one who so generously cares for her fellow inmates and petition for a final act of gubernatorial mercy but what we cannot do is justify the execution of any human being, regardless of their contrition or absolute lack thereof.

The drama that will play out in that penitentiary room will happen as we type e-mails, drop children off at school and binge watch Netflix. A dedicated chorus of witnesses will choose instead to plead for her clemency, but even if that plea is heard, it will be justice in part, not the whole. It is this miscarriage of justice that should shock us more than the twists and turns of the best Hollywood writing -- that tomorrow, and the day after, and the day after that the State will get away with murder -- again.

Will we be agents for justice and change or silent accomplices? Will we be advocates for those we deem worthy of salvation or tireless laborers for the abolition of a practice that dehumanizes us all? Only time can tell -- but as the urgency of Kelly Gissendanner's fate reminds us, the time for change is now.