What does it take to get into an elite college? It's a question I'm often asked -- by parents, students, friends, colleagues, pets, celebrities, grocery store cashiers, actuaries and the like.

Well, I say, it helps to speak several languages, and play a Renaissance instrument (but not the lute, too common). A basic knowledge of biophysics, hydrofracking, reverse-osmosis water purification and/or desalination. A talent in sign-language opera or binary code comedy. And relation to a signer of the Declaration of Independence never hurts.

Okay, I kid. We laugh. It's funny! Getting into college is a ridiculous circus and becoming worse. Enter into any upper-to-middle class enclave from December to May and it will be the talk of the strip mall: Who got in where? What did he do? Where is she going? HOW? WHY! Kids weep. They go on Xanax. They feel as if their lives are over upon rejection from Dartmouth. It's way. Too. Much.

This is why Adam Wheeler is a true hero of college admissions. Earlier this year, it was revealed that Wheeler, 24, hoodwinked his way into Harvard, professing proficiency in Old Persian and claiming that he aced 16 AP exams in high school (an "extremely rare" occurrence, College Board spokeswoman Jennifer Topiel told the Boston Globe), along the way fraudulently racking up cash awards and prestigious honors. Wheeler was caught when a sharp-eyed professor realized the young student plagiarized an application for the Rhodes scholarship. He was swiftly given the boot from Cambridge's verdant pastures has since been sentenced to 10 years probation.

In an article published this week, the Globe does a marvelous job picking apart Wheeler's original Harvard application. The results are hilarious. His application was rife with inconsistencies, including a "gushing" letter of recommendation from Phillips Academy that stated Wheeler transferred to Andover as a junior, even though his transcript said he attended Phillips for four years (in real life, he went to a public high school in Delaware). Wheeler claimed he had taken near-impossible courseloads as a high school student, even knocking off a few courses at MIT (which Phillips doesn't allow). Wheeler included with his application letters of recommendation from his MIT professors, who waxed poetic about their golden student. But there was a slight catch: the MIT professors who "sent" the letters were actually Bowdoin employees, the one school Wheeler was admitted to in earnest (but from which he was later suspended, for plagiarism).

So, basically, America's best university, home to the future leaders of our good country, got punk'd, for lack of a better phrase. By a 20-year-old. Adam Wheeler challenged the admissions gods and won.

According to Harvard's website, each application to the school is read by two or more members of their admissions committee, after which the files "are considered very carefully in a series of committee meetings where a majority vote is required for admission." And yet. Wheeler flew in as a transfer student in 2007. And it wasn't as if he was hiding the holes in his story from Harvard's gatekeepers. He had authorized the admissions committee to corroborate his error-heavy application by requesting his (nonexistent) secondary school records. Evidently, they declined.

Sure, qualified students are accepted into Harvard each year, ones who presumably did not fabricate their accomplishments. But after the Wheeler fiasco, how can we be so sure?

A Harvard spokesman told the Globe that the school has "taken steps to improve its process for screening applicants." Perhaps they will begin with a course in fact-checking the best and brightest.

And students, when those thin envelopes inevitably come, remember: It might not be you. It could very well be them. You have no idea what you're up against -- from liars to lazy admissions committees. 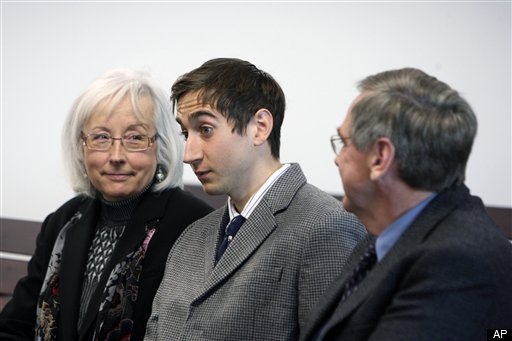 Wheeler in court this month. (AP)