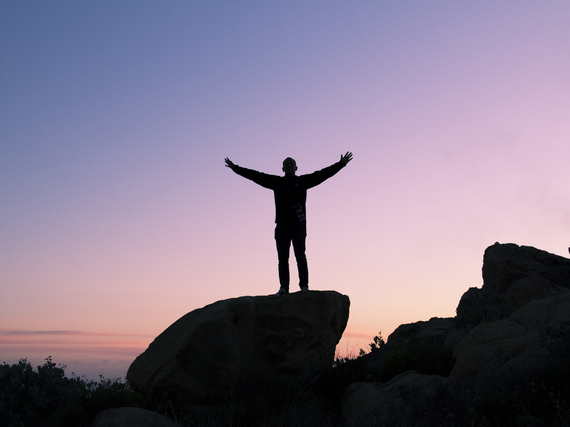 A career change. Relationship turmoil. A move. Having children. Not having children. A mountain of bills. An empty college fund. Weight loss. Saying no. Saying yes. Finding faith. Seeking balance. Do any of these words trigger you? Did your heart thump at the mention of any of them? Do they twist in your gut and torment your mind? Are you having trouble finding "the answer?"

I was in my typical Saturday morning yoga class going through the sun salutation sequence when the teacher said something profound. A Gumby-like girl was presently in a complicated inversion when he said,

"None of you need to do this to be fulfilled. In life, we may not get everything we want but we will have everything we need. But can you see past your own resistance?"

Most people went back to saluting the sun but his question was ringing in my mind. Can you see past your own resistance, can you see beyond your own limitation? I can see where I limit myself in my mind. I am aware of creating complications or self-imposed boulders to be climbed before a particular change can occur. But why? Is it about the need for control? The need to anticipate to the point that we prevent the positive outcome for fear we might miss the "preventable" negative one? Why do we make situations insurmountable?

My mother passed away this summer and in the aftermath of her sudden death there was one thought that paralyzed me. How is my dad going to survive without her? They were married for almost 40 years. How can he live in Florida alone while I am in New York? Will he succumb to depression? Will I need to leave my life and take care of him? It was almost as if I had imagined losing two parents. I created my own morbid reality and a problem to solve that wasn't even a true issue. I could not fathom a positive possibility, although I prayed for it. I could not see past the idea of him being alone, to notice the new opportunities in his life. I never imagined him doing his own laundry, taking care of the dogs alone, traveling the world, meeting new people or finding love again. I never allowed these visions to take hold, for fear of being too optimistic, and missing the reality of the situation. But the truth is my dad is actually doing great and the dark reality I imagined was just a new mountain of resistance created in my mind.

I know so many of us struggle with the chatter in our minds. We tend to block our own positive progress by being a prisoner of our thoughts. Recently, I was working with a client with digestive issues. We had worked on this issue from a physical perspective and he felt somewhat better, but I knew there was more. When we explored the core issues, it seemed his gut was the source of a feeling of being stuck. His job was draining, and his marriage was stagnant and disconnected. He felt like his life was on auto-pilot and he had relinquished all control. He could not digest his current situation, but he was attached to the notion that every step forward could be a step backward. He could make the "wrong" choice just by making a new decision, and that could lead to something dire. If he got a new job and it still was not what he wanted then what? If he talked to his wife about some of his concerns she could leave him. As a result, he was existing, but not really living. His battle to transform was his expectation that change is always negative; that it is better to be trapped in what is known, rather than explore the unknown and the possible. When I posed it to him this way it helped him to see that he was his own resistance.

There are many areas where we have to climb a mountain in our mind. For me, yoga has been Mount Kilimanjaro. About two years ago my teacher was gently pushing me to try more inversions, beginning with headstand. It terrified me beyond words. I had fears of falling and crashing into other students. I had visions of damaging my cervical spine. Then I feared not being able to do it at all. Every Saturday the fist would return to my gut and I would consider skipping class. But I forced myself to show up and I secretly prayed he would skip headstand that day. But it never failed, that pose he would always remember. I would try to push myself up, I would wobble and then I would never allow myself to really stay up. I survived but I would leave disappointed. It wasn't until one day that I decided to try a different approach. I actually heard a message in my head, "Tell yourself you can do it before you get into the pose." It was then that I realized the pose itself was not the challenge; my mind was the roadblock.

The next class I spoke to myself as if I was cheering from the sidelines, "You can do this. You are strong. You have balance. You have courage." I reassured myself the whole way into the pose. As I hung upside down I finally realized how upside down my thoughts had really been.

Our mind is the seat of our reality. Create a morose picture and watch it unfold. Create the possibility and watch the door appear as if out of thin air. Many of life's pitfalls arise from self-imposed stress and negativity. When we find faith in ourselves, faith in the ability for things to work out, and belief in the impossible we free ourselves from the chains of resistance and we are finally free.