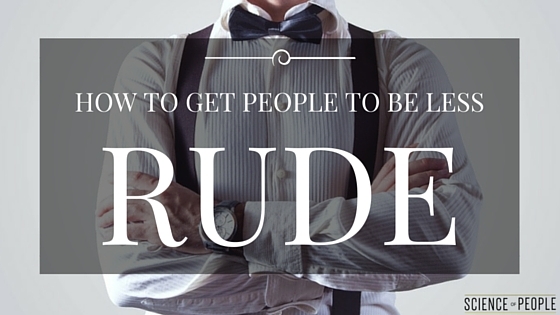 Let's face it, people can be rude. Mean. Unforgiving.

But what if I told you that I have a way to get people to be less rude....using science?

In this post, I will teach you how to:

Get people to be less rude.

Easier to work with.

This all comes down to influencing behavior. Let's start with an experiment from the 1990s to illustrate this idea:

In 1996, researcher John Bargh did an experiment to see if he could influence behavior with a simple activity. The researchers had three groups of participants.

1. The first group, called the "Rude Condition", had to unscramble a list of rude words like bold, aggressive, disturb.

2. The second group, called "Polite Condition", had a series of polite words like patient, respect and respectful.

3. The last group, the "Neutral Condition", had words that were neither polite nor rude.

So what does this mean? This experiment teaches us that people can be subconsciously primed to act differently.

How can we use this to our advantage AND avoid the disadvantages of subconscious priming? In one word: Wording.

You can prime people for the reaction you want with priming emails.

This is a huge advantage (and potential pitfall) of technology people often forget. Emails, texting, e-vites and social networks allow us to prime people before they take action. Here's how:

Use action language you want to inspire and avoid negative words you do not want to evoke.

Let's look at two examples. The first is a bad priming email:

Let's look at two examples. The first is a bad priming email:

As usual we have the weekly call tomorrow, Tuesday. Again, we are a little stressed for time and might have some trouble getting through the tasks on the agenda. I need everyone to please tighten up their points and avoid asking slow or lengthy questions on the call--you can send them out in an email later if you need. I attached the agenda.

And now for a good priming email:

Tomorrow is our weekly goals call. I'm hoping we can be really efficient because we do have a lot to discuss. If everyone can take a look at their points and prepare a well-organized overview that would be great, because then we will have plenty of time for succinct questions, if people have them. Remember you can also easily send them in an email after the call. I attached our agenda.

Both emails are saying the exact same thing--we have a meeting tomorrow, we have a lot to discuss, prepare your points, email us later with anything additional, etc. BUT the emails are primed entirely different with distinct language. When I started to change my emails for more positive priming, I found that people were more efficient and excited for the call. It also started a chain of nice follow-up emails. My responses to the first email usually followed my same pattern of using negative, stressful words and phrases. Amazingly, the second email produces kind, efficient language. Just like in John Bargh's experiment!

Special note: This is not meant to be tricky or manipulative; it's simply expressing what you want to happen with positive language instead of negative.

In fact, I am now teaching this in my training with my employees and am very transparent about using it. Many of them very much appreciate this effort and use it themselves! I also find their priming emails easier to respond to, less stressful and organized. Another benefit is that even writing this way yourself, helps you feel less stressed because you are not using those words.

I encourage you to try priming not just in emails, but also in:

Priming is such an interesting topic, especially because it allows you to see its effect on your employees, colleagues, clients right away. How does their behavior change for good priming? Bad priming? I highly recommend practicing with friends and family members and being transparent about your wanting to produce positive effects in the people you are interacting with.

Want to learn more about how to connect with colleagues, clients and build your business?

Check out our course:

Learn how to inspire, influence and engage people in this life-changing 30-day program.

If you want to succeed in business, life and love you need to master the science of interpersonal intelligence.

Master Your People Skills will show you how to effectively deal with partners, clients and colleagues so you can flourish.