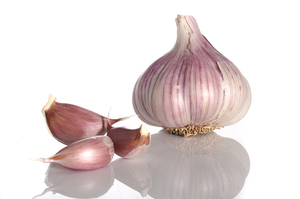 As I near the end of my first month of culinary school, I find myself facing a new hygiene problem: my hands constantly smell of garlic.

I emailed a Harvard-educated chemist-cum-consultant, and asked him why garlic makes your hands smell, and why rubbing stainless steel over them neutralizes the smell (or so I'd heard). He replied: "The smell of garlic is made up of a bunch of different molecules, most of which contain sulfur. Sulfur binds to metal really well...as a result, if you rub your smelly hands on a steel/most metals, the smelly sulfur garlic stuff clings on to the metal and is removed from your hands."

But why? I nudged him. He responded warily: "For what it's worth, sulfur has some extra electrons in 3p orbital that aren't the most stable. These electrons can fill in the partially-filled d-orbitals in the metal's electronic structure. The resulting 'bond' stabilizes both the sulfur and the metal, so the sulfur (garlic smell) will stick to the metal."

"Got it, thanks!" I replied, clueless.

Perhaps this scientific explanation was useful to some, but not to me. So I conducted some online research and found out that a) crushed or bruised garlic releases an enzyme called allinaise, which changes allin to allicin, a molecule that contains sulfur (so it smells), and b) hundreds of people had faced the smelly-garlic-hands problem and come up with remedies, the most popular (listed in rising levels of popularity) being:

3)Pam or olive oil (prior to working with garlic)

I had just moved, and the only thing in my fridge was a vial containing 40 medical thermometers left over from the prior tenant. My head spinning with images of crack dens and rusty spoons bubbling up over a flame, I made my way to the corner store and bought what I needed. The purchase looked relatively normal, especially as the person in front of me, shirtless and with tattoos all over his arms depicting biblical scenes, was buying a single pint of chocolate soy milk.

I returned home, set up my laboratory, smashed some garlic, and rubbed it on my hands.

2)A potato: The person who suggested this didn't specify whether or not the potato should be boiled, so, ever the diligent researcher, I cut my potato in two and threw one half into a pot. The raw potato did absolutely nothing so I figured she must have meant boiled. I took my boiled potato out of the water and instantly burned myself. Whatever. I'm a cook. Alas, after cooling, there seemed to be no odor-eliminating powers in the potato.

3)Pam or olive oil: I drizzled some olive oil over my semi-burned hand (its coolness felt so good I wondered if it could be a burn remedy as well?) and then set to work smashing another garlic clove, which proved a bit difficult because of the slide-factor. A small cut. Great. Then I smelled my hands. How lovely. Italian garlic bread.

4)Toothpaste/mouthwash: I opted for mouthwash. OK. This seemed to work (and burned like crazy on my newly nicked skin, but hey, it's an antiseptic right?). A little faint hint of garlic smell, but overall, nice, minty hand! We were getting somewhere.

5)Baking soda: Did absolutely nothing. Please inform me if I was supposed to do something different with baking soda than rub it on my hands, like snort it.

6)Salt: Did nothing, except burn my cut even more. Now my hands looked raw and were starting to lose sensation.

7)Lemon juice: I thought, what with the mouthwash and salt, the effect of lemon juice on my cut would be minimal; I was wrong. I cursed and kicked my foot against the cabinet, then heard a clattering. A few feet away, I saw a screw lying on the ground underneath the table I'd put together the previous week. I picked up the screw, threw it in the garbage, and smelled my hand. Not so bad! But perhaps that had to do with the screw itself? So I went onto the final, and most promising remedy...

8)Stainless steel: People swear by this. Someone even suggested holding a stainless steel spoon in your mouth when chopping onions to prevent weeping. For another time. So I ran my hand over my chef's knife and took a whiff. It seemed to have worked, a little bit, but was so overpowered by the smell of minty freshness that I couldn't be sure. I washed off my hands and went back to the internet, where I found an interview on NPR with Dr. Bob Wolke, a professor emeritus of chemistry at the University of Pittsburg, who conducted an experiment much like mine and concluded that stainless steel doesn't seem to have a real effect on eliminating the garlic smell.

Upset, I made myself some boiled potatoes with garlic, oil, and lemon juice, rinsed my mouth with mouthwash and moisturized with Noxzema (my new place was really coming together!) and headed into class the next day with a question for my instructor. So, how do you make the smell go away? He looked at me, indignant.

"Sophie, why this question about getting rid of the garlic smell? C'est magnifique, non?"

So that's a chef's remedy.