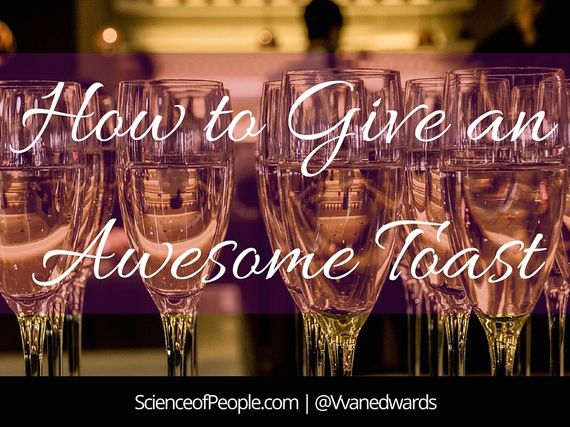 Someone's getting married. Someone has a big birthday. Someone got a promotion.

...and you've been asked to give a toast.

I'm at that wonderful time in a person's life where wedding invitations roll in on a weekly basis, friends land awesome new jobs and baby bumps are announced regularly. This means that I sit through a lot of toasts...

Toasts that are too long.

Toasts that are horribly inappropriate.

And occasionally, very rarely, like as often as I floss (2x per year right before the dentist), I hear a toast that BLOWS ME AWAY.

A great toast is an event game-changer. People perk up in their seats, guests put away their phones, jovial back slapping and glass clinking increases three-fold. Oh ya, and the toaster? They become a celebrity. If you ever want 15-minutes of fame, set yourself up to give an awesome toast.

Here's what will happen: You will put down the microphone and everyone, especially Grandma Dee, will want to talk to you. Uncles and college roommates alike will generously offer to buy you a drink at the all-inclusive bar. The videographer will grant you an exclusive interview and follow you around for a good portion of the evening until you tell them that you want to eat your surf and turf in private. The waiters will wink at you, the bartender will give you an extra cherry and the guest of honor (whoever you toasted) will gush and cry and thank you profusely for making them look good.

Bottom Line: Giving a great toast is a gift.

Your amazing toast is a gift to the person you love. It's a gift to the audience, desperate for some entertainment and sure, it's pretty fun to be a rockstar for the evening.

After listening to literally hundreds of toasts, I have identified the patterns that differentiate the suck-worthy from the award-winning.

Before diving in, be sure to:

The best toasts follow the same basic structure. When you sit to jot down some ideas, pull out a blank piece of paper and do it in the following format:

People decide if they like your toast within the first 7 seconds. If you don't hook your audience immediately, you will lose them.

The biggest mistake toasters make is: Starting with "I," "me" or "my."

I'm going to be frank: No one cares about you, your history or your relationship to the guest of honor--at least not yet. Everyone is gathered for the toastee (the person you are toasting) and that is who they want to hear about. They want to hear embarrassing stories, secrets and funny tidbits. So, give them what they want. And do it fast.

Think of your audience like a hungry, hungry toddler. They are starving and you have to give them a little bit to nibble on before you put their bib on and strap them into their high chair. You do this with your hook.

A hook is a one to three line description about the toastee. It should be juicy, funny or mysterious. This is the first line of your speech. Let's say the person you are toasting is named Spencer. Fill in the blank:

This hook warms the audience up to you and gives them a promise of salacious and amusing stories ahead.

Once you have hooked the audience, you do have to give them some background on why you're giving a toast in the first place. By now, they are moderately intrigued and want some context. HOWEVER, there is a right and wrong way to give background.

For example, you often hear people say, "I met the groom as a Freshman in college and we were roommates for 3 years." Or, "I'm the maid of honor and the bride's little sister." BORING! Try this instead:

After your hook and a brief background you are ready for 1, 2 or 3 stories depending on how much time you have been allotted. Rule of thumb:

The stories you pick are key to giving a killer toast. The perfect story has the following elements:

Only OK Story: Spencer and I used to party hard in college. One night, we were getting ready to go to a Toga party and Spencer forgot to wear something under her toga! We get to the frat party and as she is dancing, her toga gets caught on something and rips off. She was so red and so embarrassed and tried to play it off like it happened on purpose, but we all know what really happened. Anyway, she went off to the bathroom and got it all fixed. But it was a crazy night.

Awesome Story: Some of you might know that Spencer is a total party animal. And by party animal I mean, goes to bed by 10pm every night, prefers coke without the rum and actually volunteers to be designated driver. So, we should have known better than to convince her to go to a toga party at the local fraternity--don't worry Dad, there were teacher chaperones there (wink, wink, nudge, nudge). Spencer, being a toga party novice, did not get the memo to wear a 'just in case' outfit underneath her toga, assuming that the billowing white sheet and 4 safety pins would cover her plenty. Fast forward to the middle of the dance floor, Spencer is about to bust into one of her crazy dance moves (I'm sure she learned that from you older brother, Robert). Anyone who went to college with Spencer--I see the Tri Delta table in the back, knows the Spencer dance move I am talking about. It involves a little shimmy here and a little bouncy there. So in the middle of this crazy dance move, Spencer's toga gets stuck on the corner of the beer pong table and rips off of her in one big swoosh. Of course, Spencer pretends this was a purposeful move and ties it into her grand finale sashaying off the dance floor into the bathroom. Don't worry everyone, I have made sure her wedding dress is secured with more than just safety pins for dancing later.

After your final story and your last audience tie-in, it's time for the clink. This is the part of the speech where you can get sappy. It's your opportunity to offer well-wishes, thanks and gratitude towards the toastee and anyone else in the room. Specifically:

The best clinks actually allow the audience to join in with your gratitude and make everyone in the room feel that you speak on their behalf.

Only OK Clink: Lift your glasses in a toast to the bride and groom and their family.

Awesome Clink: Please lift your glasses as we thank Mr. and Mrs. Jones for hosting this lovely evening. To the beautiful bride and groom, may you have a long, healthy life with just as beautiful children. We love you and are so excited for you. Cheers!

I talked about the Toast Do's, now it's time to take a few minutes to go over the dreaded Toast Don'ts. I call these Toast Felonies because they absolutely kill your stage presence and charisma.

Full disclosure: these are harsh... and super common. If you want a great toast, you have to throw away the easy stuff, make some cuts and dig deep. If you have committed one of these toast felonies in the past, it's ok, I forgive you, but do better next time. When preparing your toast, pretty, pretty please for all that is holy never ever ever do the following:

This is a really hard one. Do NOT write out your speech. Do NOT type it up word for word. Do NOT read. The moment you read your toast, your charisma dies a slow, painful, embarrassing death.

Scripting is lazy. Yeah, I said it. Scripting your speech is not a gift. It's a gift card. It's not as good, not as personal and makes your audience do the work.

I have never, ever heard an awesome toast that was read. Have you? But, have you really?

There is an answer. It's the savior, the angel: bullet points. The beauty of centering your toast around stories is that you know how to tell your stories. In fact, the more fluid and off the cuff you can be, the better. Bullet out each area of your speech and then practice, practice, practice. Remember, this is your gift. This is your friend, family member or loved one. They are worth it.

A superlative is a word that signifies the most of a trait. For example, here are the superlatives that are used the most often in toasts:

These words are like cotton candy--they sound pretty, but they have no nutritional value. When you say, "The bride is the prettiest, funniest, bestest girl in the whole world!" you might as well be saying, "The bride is the blahdiest, most blahdiest, blah, blah, blah!" Superlatives are boring AND everyone else will be saying them. If you don't want your toast to sound like everyone else's, then cut them. ALL OF THEM. Here's how:

You know a toast will go badly when someone takes the mic and starts with a litany of apologies and qualifiers. They sound like this: "I'm sorry I'm not a great speaker." "I don't know ___ that well but..." "I'm sorry I had to use note cards." "I'm sorry I'm drunk". Starting a toast with a qualifier is like admitting defeat before the race. Interestingly, qualifiers tend to have the opposite effect of what was intended. Instead of offering an excuse or apology, qualifiers actually call attention to whatever you are worried about and irritate the audience. So, STOP it! You have three choices:

Clichés are vapid verbs that encourage communication slothfulness. You can't have an awesome toast while being lazily verbose. And guess what? You can kill clichés with a shockingly simple word weapon. It's called a thesaurus. Use one, Google one and ruthlessly cut banal platitudes.

When practicing your speech, don't forget about your body language in addition to your verbal language. Here are a few nonverbal tips for you:

I have a few more quick tips for toasts that you should keep in mind:

Most importantly, remember that your toast is an act of love. I'm being serious here! The greatest gift you can give another human being is sharing your love for them in public. It honors them, it honors your relationship and shows others you are proud to have them in your life. So, don't just have an OK toast, have an awesome one.