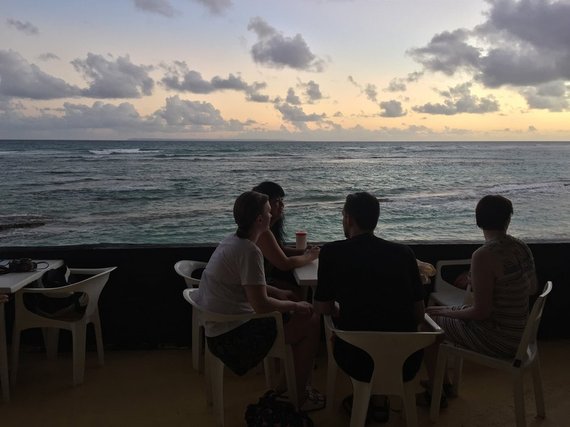 Our group enjoys the sunset--and some cocktails. | Photo: Cynthia Drescher

Curious what it's like to hit the beach with your colleagues? Condé Nast Traveler editors find out.

A few months ago, low-cost carrier Norwegian Air announced new direct flight routes between New York City and the Caribbean islands of Martinique and Guadeloupe. The opening fares were so great--under $200 each--that three different Condé Nast Traveler editors decided to take advantage of the deal. Digital photo editor Corrie Vierregger, contributing writer Cynthia Drescher, and I all booked seats on the very first available flight from JFK to Guadeloupe. Once we compared notes and itineraries, it became clear that pooling our resources would guarantee a better (and more affordable) trip. So we all chipped in for a rented Airbnb villa, researched the island's beaches, and got ready to vacation with the people we normally talk to about spreadsheets and deadlines.

Initially, I had a lot of panicky questions. Could I drink in front of my colleagues? What if I got drunk? What if I got drunk and said something stupid? What if I had a disagreement with someone and then had to go back to work and pretend to get along later? Would we just end up talking about work the whole time, thus negating the point of a vacation? However, once I was actually en route to the island, it felt like any other girlfriend getaway or college reunion trip. Many of the same best practices for group travel applied here. First, each person (in addition to the CNT gang, there were two other friends coming along) was assigned a specific job.

Related: The Friendliest and Unfriendliest Cities in the World

As a fluent French speaker, I handled translating, as there's very little English spoken on the island. Cynthia was the only one in the group with a driver's license (the hazard of going somewhere with a bunch of New Yorkers); it was a useful skill on an island with minimal public transit. Corrie took on navigation duties and art direction (more on that later). We also designated a spot in the house for keeping receipts, so that we could split all costs evenly at the end, and everyone voted on what to do each day. (Museums? Nah. The waterfall in the middle of the national park? Yes, please.) We grocery shopped as a group, giggling over imported French foods (why exactly does condensed milk need to be squeezed out of something that looks like a giant toothpaste tube?) and stocking up on local beers. When it came to the drinking question, I followed the same etiquette I was taught about ordering pungent food on a date: If one eats garlic, both must eat garlic.

It also helps to have a shared goal (besides "having fun," which should be a given). Our office had recently gotten a Star Wars BB-8 toy, and we shlepped the droid along with us in order to get some cute footage to use for a video. Figuring out how to operate the droid and then choosing different environments to film him (her?) became a fun group project--and a valid excuse for having three employees not in the office at the same time. 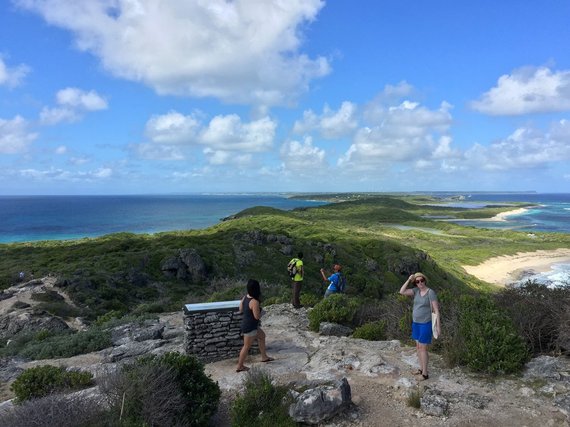 Of course, every trip will have its unexpected moments of potential disaster. Although the rented villa had plenty of space, its configuration presented some challenges. Cynthia and I called dibs on the upstairs room, which had a pretty slanted roof and a set of twin beds swathed in mosquito netting--only to discover that our bathroom didn't have a door and the shower didn't have a curtain. Going on vacation with your colleagues is one thing, but seeing them naked is entirely another. We worked out an informal schedule for post-beach showers, and before coming into the room made sure to announce ourselves loudly just in case. By the end of the trip, the weird bathroom setup was more amusing than awkward. And everybody knew how to say "more wine, please" in French.

One of the gifts of travel isn't just how it makes you see the world differently--it's how it makes you see other people differently. After traveling with a former boyfriend, I learned more about his coping skills in two hours of searching for misplaced luggage than in six months of cohabitating. Travel has a way of showing you angles and facets of a person you didn't know existed. I drank, and I made some dumb jokes, but so did everybody else, and we laughed together. We did talk about work, but we also talked about relationships, our families, books, other places we'd been to, how insanely good the bouillabaisse was, the best seasickness remedies, the British TV show Death in Paradise (it's filmed in Guadeloupe, so we all started binge-watching on Netflix ahead of the trip), the stray cat we befriended, and whose turn it was to carry toilet paper in case we encountered a particularly grotty public bathroom. Instead of being "my coworkers," people whom I only knew in a limited role, my fellow travelers were three-dimensional. Back in the office, we collaborated more. When you know what makes someone tick, it's easier to know which project they'd nail or which piece they'd do a good job editing. Corrie is a great photo editor, but she's also hilarious in a clever, subtle way. Cynthia isn't just an aviation expert; she's an intrepid boots-on-the-ground adventurer open to trying anything once.

I tried to imagine an alternate version of the trip where I'd gone solo. I most likely would have stayed one of the island's few resorts, feeling isolated without the ability to drive. I would have been stuck signing up for package tours or hotel-organized day trips in order to see different beaches and hiking sites, without any flexibility to pull over at a roadside stand that looked interesting or randomly stop for a great picture-taking vista. Solo travel has its benefits, but I prefer it in an urban area where it's easy to get around via mass transit and blend in with the throng. The island still would have been beautiful, but I would have had far fewer opportunities to really experience it. I'm positive that I had a richer, fuller experience of Guadeloupe because I went with my coworkers--or, as I think of them, my friends.

More from Condé Nast Traveler:
The 50 Most Beautiful Cities in the World

The Most Beautiful Towns in America

More:
beachtravelingcoworkerscoworkervacation
Newsletter Sign Up
An essential daily guide to achieving the good life
Subscribe to our lifestyle email.
Successfully Subscribed!
Realness delivered to your inbox