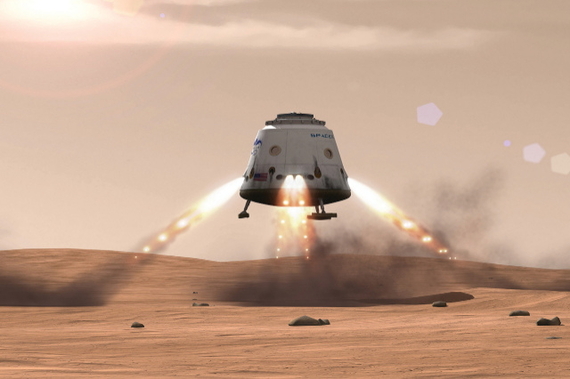 Let's get this over with once and for all: We are going to Mars. The only questions are: When? Who? How? Which way? And, of course, why?

Science
We go to learn about our solar system, to search for life, and to understand what happened to Mars so we avoid it ourselves.

Civilization
We go to settle, expanding the domain of humanity and life, because that is what living species do -- and if we stop we die as a culture.

Straight there or via the Moon.
Elon Musk and old school Apollo fans want to go straight to Mars.
Elon wants to plant people, the old schoolers want to plant flags.

Many want to practice on the Moon -- just three days from Earth -- before sending people three months and 225 million kilometers to Mars. Some want a cislunar space station to learn long-duration spaceflight, others to get down and dirty on the radiation-bathed lunar surface. Still others want to stop at the Martian moons to mine propellants and operate robots on the Martian surface.

Most want to emplace supplies and equipment on Mars in advance, converting the atmosphere into propellant, air and water before humans arrive. Some want propellant depots in space on this end using lunar - or asteroid - derived materials.

Some want massive rockets hurling astronauts from Earth's surface to the surface of Mars. Some want large spaceships that never touch ground on either end, cycling back and forth indefinitely with astronauts ferried up and down on both ends, a la Buzz Aldrin.

It's in the wind, so soon. Next month's movie The Martian may someday be seen as the cultural icon of the shift. Right now the only announced human Mars program is Elon Musk's SpaceXs. I'm betting robots on Mars by 2020 with humans by 2030. NASA hints at 2035 or so. Musk wants to send settlers to stay. NASA works for the government. They can only send explorers to visit.

China, Russia and India are shooting for the Moon. United Arab Emirates says Mars. Other private citizens and companies are heading either to Mars, asteroids or the Moon. So, unlike the first Space race, this time the governments will be racing the people.

This, in a nutshell, is the state of play.

So what should we do?

Answering Why? culls out dead ends. Since top space leaders at the 2015 Pioneering Space Summit agreed settlement is the goal for the US - and you can get science with settlement (the reverse does not apply) - I that will be my standard in the process of elimination.

Either direct or via the Moon. They both have merits.

Some fear government bogging down on the Moon. Given the space shuttle and station were pitched as stepping stones to the frontier but turned into money pits, it's a good point. Been there, done that.

Yet, going direct to Mars is too risky for government. This is because they have to bring explorers home alive. Death = failure. Baby steps.

However, private groups sending volunteers willing to die for the cause can take more risks. They struggle, they die, more step up -- eventually they succeed -- they're called settlers.

Some people want to look out their hab window on the Moon and see Earth, while others want a sky -- even if it is red. Space is big, pick your neighbourhood.

What can we eliminate?

The first and biggest cut is easy - but controversial to some.

If settlement is the goal, Apollo redux is dead. Giant expendable rockets hurling government employees and return vehicles at Mars to bring back PR heroes won't work long term. To settle, we send other kinds of heroes -- settlers -- who live out their days establishing communities as more and more follow. Different models. And since the one-way model is much cheaper, and those who will build one-way systems first are private sector, they may well beat the government to Mars.

This is where it gets sticky. Governments spending billions on a humans-to-Mars program won't allow wild-eyed billionaires to steal the glory; all heck will break loose as the public and sidelined governments decry and block the perceived cosmic land grab. Yet the private folks aren't waiting. And anyone paying attention to Washington must admit governments will probably not be able to put people on Mars first -- to stay.

As a veteran of a battle between people attempting a private space station and the government (MirCorp), I suggest a Mars partnership where both parties -- public and private --leverage off one another in a two pronged drive so if the private sector gets to Mars first, it's a victory for all, and if they fail, there is enough momentum to keep moving.

1. Declare: Humanity is going to explore and settle Mars.

3. Incentivize: Private firms that invest in LEO and beyond.

6. Avoid bogging down: NASA and its partners can build or contract evolvable long-duration cislunar space facilities, while supporting US private sector development on the Moon's surface as a customer for goods and services. This includes establishing gas stations in near-Earth space by buying from the lowest bidders -- be it from the asteroids or the Moon -- establishing a market that promotes infrastructure and competition.

7. Build the highway: NASA and its partners can build large evolvable, modular spaceships with artificial gravity to cycle back and forth to Mars (ISS and Bigelow modules come to mind). Construction supplies and personnel can be ferried up and back by expanding the successful commercial crew development program now servicing the ISS. (Private cars/public highways.)

Using this plan, cautious governments can baby step from the Moon to Phobos and Deimos. If SpaceX and others want to leapfrog directly to Mars, they can; supported by a global network of labs, and practical experience being gained above and on the Moon. The big Mars cycler ships follow later, supplied on both ends by propellant depots near or on the moons of both worlds -- kickstarting a space economy. Homesick first generation settlers can head home on the cycler, as new settlers arrive along with a now endless and regular supply chain linking Earth, the Moon and Mars.

This is not "The Plan" - just an idea to show we can support both science and settlement, engage the public and private sectors, while acknowledging the limitations, drivers and ambitions of both. It is "on purpose" meaning that if private settlers get ahead of the government it's a win-win for all.

We cannot fight ourselves or waste money on flags and footprints. It would be an obscene poke in the eye of future generations, showing we have learned nothing and care not for their legacy.

Instead, let's combine our strengths to create a future where humanity -- where our children -- can have it all.