Ginger is an all-mighty plant. Studies have shown the fragrant, spicy root can help reduce the pain of arthritis, treat motion sickness and relieve cold and flu symptoms. It's basically winter's antidote; it fights the season's impending sniffles like garlic fights vampires.

Ginger has been praised for thousands of years for its medicinal properties, and is often prepared in teas, stir-fries, soups and even cocktails (which might undo its medicinal powers, but hey, it's tasty).

You might be more familiar with the pickled variety -- the kind that is served alongside sushi -- or even powdered ginger, which comes packed in a shaker. But preparing fresh ginger at home is incredibly simple and something anyone can master -- all you've got to do is grate or mince the funky root and it's ready to be served. But, the ginger root itself can appear a little intimidating. Its knobs, nooks, crannies and bulbs seem foreign, near-untouchable. If you aren't meticulous with a grater, you run the risk of nicking your knuckles and blood-stained ginger. Yikes. 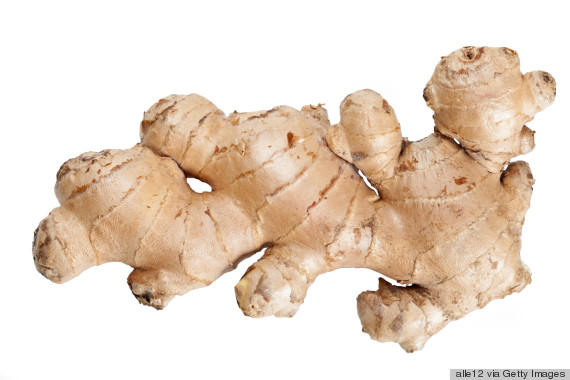 Fear of bloody knuckles should not keep you from fixing the fresh stuff in your own kitchen. There's a simple trick that makes the process quick, easy and painless. All you'll need is a spoon and a fork and you're on your way.

If you have a large root with a lot of limb-like extremities, use a knife to cut one off. Most recipes won't call for an entire root, and you can save the unused parts for another day.

Scrape the surface of the ginger with the edge of a spoon. The spoon will remove the skin -- but not the flesh -- and will be able to accommodate the root's wonky shape.

Now, scratch the peeled root across the tines of a fork. Bits of ginger will gingerly (heh) fall off into a neat pile, and you won't have to worry about bloody fingers.

Things to know about storing ginger:

Now that you know the tricks of the trade, get some recipe inspiration below: