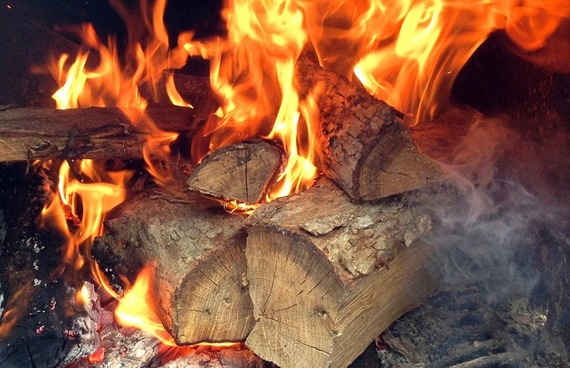 Wood is the original and, to my mind, still the best fuel for grilling, and grill masters from Montevideo to Munich back me up on this. Charcoal and propane or natural gas produce heat, but only wood gives you both heat and flavor. That flavor is, of course, smoke--made up of carbon compounds like guaiacol, also found in roasted coffee, and syringol, the active ingredient in liquid smoke responsible for the "smoky" flavor.

Wood has two very different uses on Planet Barbecue. As a fuel it imparts delicate flavor of wood smoke. As a smoking agent--whether charcoal, gas, or an electric burner provides the heat--it imparts the heavy smoke flavor associated with traditional North American barbecue. The most common woods used for grilling are oak, used in California, South America, and Europe; beech, used in Germany; grapevine roots and trimmings, used in France and Spain; and mesquite, used in Mexico, Texas--and in Hawaii, where it goes by the name of kiave. Conventional wisdom holds that you shouldn't use softwoods, like pine and spruce, for grilling, the theory being that their smoke is high in tars and creosote. However, in France, mussels are grilled on pine needles, and in Germany, people grill bratwurst over pinecones--all with fabulous results.

You can use wood four ways for live-fire cooking:

To learn about wood pellets and other ways to grill and smoke with wood, visit BarbecueBible.com.