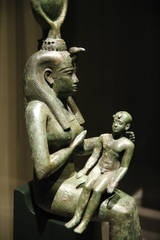 When you hear the acronym "ISIS" lately, unfortunately, you probably recognize it as an acronym of terror and brutality. This is a shame, because "Isis" is a word that has much to offer us. Isis was an ancient Egyptian goddess worshipped all across the Mediterranean and beyond, and now is the time of year when she is held most sacred.

Just as October 31 is the day when contemporary pagans feel the veil between the worlds is the thinnest, the ancient Egyptians also found this time of year the time to celebrate the permeability between death and life. And Isis, daughter of the sky goddess and the earth god, embodied that power of transformation and resurrection.

Isis was a magical healer who was said to have taught Egyptian women how to grind corn, spin flax, and weave cloth. But Isis's real power was her understanding of life and death. In her central story, the body of her brother and husband, Osiris (whose constellation is known today as Orion) was cut into 14 pieces and scattered over Egypt. Isis travelled throughout Egypt to collect the pieces and found everything except Osiris's penis, which had fallen in the Nile and been eaten by fish. Isis recreated the penis out of gold and invented the Egyptian rites of embalming to resurrect him. Then she changed herself into a hawk, made love with the golden phallus, and gave birth to their son Horus.

This extraordinary story was the basis of the four-day festival or "hilaria" of Isis. At its climax on November 3, the celebrants would enact the resurrection of Osiris and shout with joy at his rebirth.

As I write this on All Souls Day, when daylight saving is about to make the nights even longer and a light snow is falling on my area of Maine, I am inspired once again by Isis's power to transform and to heal. It reminds me of my own power to gather lost pieces together again, to transform myself, to create, to be inspired.

To those of us raised amid Christian imagery, there is an uncanny familiarity to some of the images of Isis nursing her baby Horus. Sabrina Higgins of the University of Ottawa points out that the monks who painted icons of Mary nursing Jesus "were borrowing this image from the familiar iconographic repertoire of Isis and other Egyptian mother goddesses." What a striking reminder how religious images can unite us, grounded as they are in the archetypal unities that we all share.

The worship of Isis is still active today, 5000 years after it began, by groups such as the Fellowship of Isis. Many I know in the Goddess community are dismayed by the current use of the acronym ISIS in the media and are wishing that the press would instead employ the term ISIL ("Islamic State of Iraq and the Levant"), used regularly by President Obama, or the term used by the group itself, the Arabic acronym DAIISH.

Meanwhile, whenever we hear someone say "ISIS," we can take it as a chance to meditate on the real Isis, the goddess whose worship was so widespread that she became known, according to Goddess scholar Patricia Monaghan, as "The Lady of Ten Thousand Names" --all of whose gifts were united by her powers of resurrection and healing.