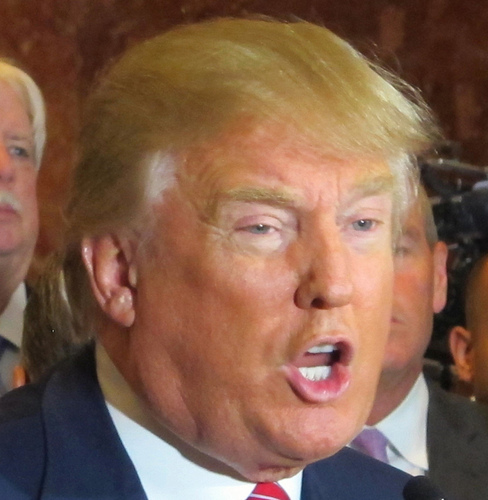 Donald Trump has taught us all that you can get a lot of attention with a good insult. Political incorrectness is apparently the new black. So if you want to be fashionable, you need to learn how to hurl a Trump-sized insult like a pro! Here are five easy steps you need to master in order to make people pay attention to you and talk about you because you are so insulting!

1. Size-shame that person - Look objectively at the object of your derision and assess whether the person is short or overweight. Either or both of these qualities in your target will enable you to state the obvious in a tone of voice that will infer condemnation and elicit repulsion in those around you. If the person is a man, referring to him as small or little will impugn his manhood. And if he is also overweight, calling him "little and fat" will render him basically a girl, albeit a chubby one. Hell of an insult! And if the person is a woman, refer to her as large or fat or obese but not small because short women are just fine if they're pretty enough.

3. Reveal the person's religion, if that person is a Muslim - The Trump playbook on this one is tricky, so pay attention. You have to be, or pretend to be, a Christian. Like someone who goes to a Christian church on Sundays and not one of those Christian churches that preaches hatred of the white male industrial machine. Then you have to spew hatred of the entire Islamic religion because they have some lunatics who hate us and hunt us. Then you have to ignore the fact that there are some Christian whack-jobs who also hate us and kill us. Oh my god. This is complicated. Just call them Muslims and people will be scared. Leave it at that.

4. Determine if the person is here illegally - Investigate whether the person is an undocumented illegal immigrant. If so, refer to the person as a rapist or murderer or drug dealer if they came from south of the border. If they arrived from any other direction, just call them cheaters and liars but don't wander into any discussion of whether you have ever cheated on your wife or lied to her while hooking up with your next wife.

5. Question the person's intelligence - If you have nothing else to throw at your opponent, just call your opponent stupid. And then remind everyone that you are very smart because you are really rich and stupid people don't get rich - unless they inherited the money, but you don't need to go into that. Just keep repeating words like stupid, idiot and fool.

The ability to hurl a Trump-sized insult like a pro really is the new black. Practice up and even you can insult more people than you ever imagined!