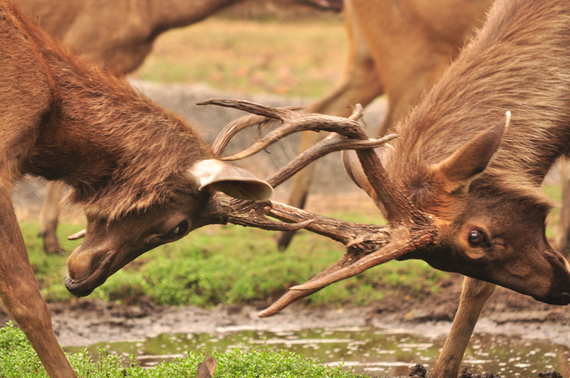 A couple recently came into my office. On paper, they had a reasonably healthy marriage. Greg had suffered some setbacks at work, and got depressed sometimes, but Sue did her best to be kind and generous. They still got the kids to soccer games, managed work demands, went to church every Sunday. Most significantly, they tried hard to avoid fighting, and they had basically succeeded.

My diagnosis: Their marriage was on life support. Yes, their household was technically peaceful. But in their case, peace came at the expense of passion. They had stopped fighting, sure, and then they stopped solving problems together, stopped planning things -- and stopped having sex. They were living peacefully, but also in parallel.

Isn't kindness and forgiveness the key to a happy, lasting marriage? The short answer is "No." Efficient marriage often results in deficient sex. Picking a fight, especially with a depressed partner, might feel mean and unproductive, but the truth is if you avoid fighting, you are avoiding activities that require risk. And if you avoid risk, you avoid intimacy. Fighting can be like a fever -- a healthy immune response to an underlying or latent threat. While it might be unpleasant in the moment, it is doing good work. This kind of fighting is what I call "essential fighting."

Essential fighting stays focused on the essence of what you are fighting about. What do I want? Why? What do you want? Why? Can I avoid commenting on your character and stick to your behavior? Can I stay in it until we both agree we are done (no dramatic exits)? The partner checks for understanding before responding -- the "reflective listening" we all know and hate. "So I think you are saying..." Essential fighting avoids the pitfalls of "Drive-by therapy" -- the "let me tell you what your issues are" ("You get upset with me for telling you what I like during sex, but the real issue is you don't like to be told you did anything wrong"); "And another thing" ("It made mad that you just started kissing me, assuming I was ready, and you know, you never exchanged the gift I asked you to"); and "Going global" ("You are anxious about everything"); all hallmarks of poor fighting skills -- and poor communication. When we fight poorly, we avoid meaningful conflict, a fight that can bring about good change.

Sex declines as couples avoid conflict, and "fatigue" or "lack of time" are usually blamed. In a serious case of mistaken identity, conflict has become the enemy. Complacency and risk-avoidance are embraced. In the campaign for greater intimacy, essential fighting is exactly what is needed.

Fighting in a marriage has an obvious purpose -- to figure out who is "right" -- but also a more deep-seated purpose, one that deals with the limbic system, the part of the brain in which we experience the rush induced by taking most any risk. The limbic brain is the place of arousal, and when we fight, and our feelings involve love and anger, things can get interesting in the limbic system -- the connection between anger and passion. Passion is exhilarating and uncertain -- desire, fueled by this uncertainty, flourishes.

So why is it that couples avoid the very activity that promotes the passion that they are ostensibly working to maintain?

Greg and Sue were sure that fighting would leave them feeling discouraged and sadder than before. Also, fighting would get in the way of their main project, that being taking care of the kids. As Richard Reeves wrote in a recent Atlantic story: "The glue for modern marriage is not sex, nor religion, nor money, it is a joint commitment to high-investment parenting," or what he summarized as "HIP" marriages.

A modern marriage is like a small corporation. It values responsibility, safety and efficiency. In the face of those priorities, passion yields. Avoidance begets complacency. Let sleeping dogs lie. Leave well enough alone. Pick your battles, Why upset the applecart? There is encouragement aplenty to avoid conflict.

The excitement of risk is most clearly seen in the widespread practice of what we collectively call" kink." In a recent New York Times Magazine story, one woman asks her husband to be "rougher" in bed and is disappointed when he keeps checking with her to see if she's "okay." But what she's really asking is for him to take a risk, in essence "Take me somewhere unfamiliar, somewhere that might feel dangerous, without being unsafe." She took a risk, invited a conflict with the known to possibly rediscover mystery. Sadly, he responded by withdrawing.
What is the potential of kink? What does wearing "fuck-me" pumps in the bedroom point to? It is an invitation to take a risk, to mystery. It can also trigger a fight. "What are you thinking? Are you really into that?"

When blindfolds and kinky boots succeed perhaps it is because they challenge "I know my partner and my partner knows me. Maybe mild kink is an uncertain baby step -- risking inventiveness.

It was much the same with Greg and Sue. She risked conflict by telling him he hurt her by his lack of response to her efforts to aggressively "mix it up" in bed. He was hesitant to respond to a request that immediately felt unfamiliar and unsafe. The resulting fight was a painful one. At the beginning, it seemed things would not change. Ironically, starting the fight was evidence of the opposite. Greg realized that Sue taking him on was a sign that things were changing. He tried engaging with her and the family rather than withdrawing. Neither of them mentioned blindfolds, but after a few weeks she came to my office and reported that she remembered what make-up sex feels like.

Fighting about sex can be a kind of double bind, so with couples like Greg and Sue, it is especially important to stick to essential fighting. In their case, it would have involved Sue stating, "This is just about what we do during sex. I want it to be more edgy. I want that because I think it will make me want to have sex and enjoy it more. Greg responded okay, "So I think you are saying this is just about sex, and you want... because..." Then he responded, "I would love it if you wanted to have sex more frequently and enjoy it more. I am willing to try, but I need you not make ongoing editorial corrections, give me a chance to read you rather than hear you."

Ultimately there is no "easy" fix -- but therein lies the seed to a solution. It is in risk and conflict that passion can be rekindled. And I don't have to tell you that sex is worth fighting for.

More:
conflicthealthy livingParenting fightingMarriage
Newsletter Sign Up
The essential guide to taking care of your mind and body
Subscribe to HuffPost’s wellness email
Successfully Subscribed!
Wellness delivered to your inbox