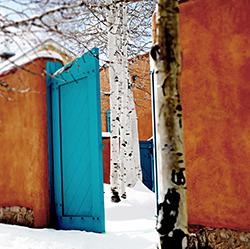 How are we Americans collectively feeling about our retirement prospects? Survey says (and most financial advisors would concur), not so great. Consider this comparative data from an annual study by the Employee Benefit Research Institute:

• In 2007, the EBRI study found that 27 percent of wage earners felt "very confident" their retirement plans were on track. Another 43 percent felt at least "somewhat confident" they were making their desired progress.

Importantly, in 2013 a whopping 28 percent felt "not at all confident" that they would have enough money to retire, up from a mere 10 percent who gave that gloomy assessment in 2007. Ouch.

What's the key to an investor's confidence?

The number "$250,000" provides one indication. That's the amount in long-term savings quoted by a 2012 Wells Fargo Retirement Survey as a clear dividing point on the confidence front. Eighty eight percent of those surveyed with more than $250,000 in savings felt confident they were on track to retire. Only 57 percent of workers below that mark believed they'd enjoy a secure retirement.

Point being, this study suggests financial confidence doesn't stem from outrageous compensation or blind luck. Rather, confident responders were methodical, disciplined and big on planning, according to the leaders of the study. Those with savings above $250,000 contributed a median 12 percent to their 401(k)s; below that, it was a median 7 percent.

Unfortunately, not enough of us are placing serious emphasis on retirement planning. In a recent survey by Aegon,employees ranked retirement saving plans lower on the perk desirability scale than flexibility, vacation and compensation. In other words, we'd rather bargain for today's quality of life than tomorrow's security.

Next question: how do those "confident" folks know $250,000 (or more) in long-term retirement savings is enough?

Likely, they have explored the relationship between their desired level of spending in retirement and their current level of savings, relative to their current age. If you haven't used a retirement calculator before, a great starter is Choose To Save's "BallPark Estimator." It takes less than 15 minutes to complete and will give you a solid starting point for how much to target in ultimate retirement savings. After doing this exercise, you may be surprised how much more calm and in control a few hard numbers make you feel!

Alternatively, the chart below, from Fidelity Investments, gives a rough starting point for how much a person should have in targeted savings at different stages of her working lifetime. Find your current age to determine your target savings, as a multiple of current earnings: 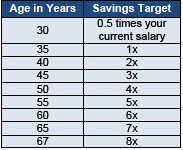 If a review of this chart indicates you're behind schedule in your retirement savings, don't despair. Get motivated instead. Look over your current levels of saving and spending to see where rejiggering is possible. By identifying a concrete retirement savings target and then taking small daily steps towards it, your confidence can grow commensurately with your increased savings.