Innovation and the federal government are not words that we often hear together, but Bryan Sivak, who is the Chief Technology Officer for the Department of Health and Human Services in the United States Federal Government, is changing that. The bureaucracy and red tape that comes to mind when we think of the federal government (and many large organizations) are the very reasons why Sivak didn't ever envision himself working for the federal government, but when he was offered the job of looking at innovation as it relates not just to technology, but to the process of behavioral change and getting a large organization and a culture to shift, he couldn't turn it down. 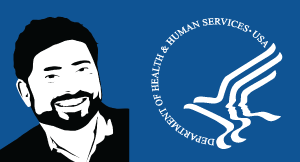 Bryan Sivak, CTO of Department of Health and Human Services

As CTO for HHS, Sivak has the challenge of helping 90,000 full-time employees working across 11 different to work together to figure out how to take advantage of new tools, new processes and new methodologies to do "old things." He is successfully overcoming the forces of inertia that tend to militate against innovation or change through a combination of management finesse to magnetize and attract people onto his set of goals by supporting their objectives and by demonstrating quick wins.
As the pace of change continues to increase in the modern world, institutions of all sizes need to be able to react faster and more proactively to get ahead of the curve. Sivak gives great advice for how to prepare for that universe by changing the culture of the organization so that people are in a proactive mindset where they are encouraged to experiment with new ideas and move the ball forward in new and unexpected ways.

How to influence a culture of innovation in government and beyond:

1. Look to people and culture (not technology) to solve problems - The focus of Sivak's work is primarily centered on process and culture and creating the conditions for change and innovations as opposed to the technology itself.

"One of the things that I've come to realize over the years is that technology is very rarely, if ever, a direct solution to a problem. It can be a catalyst, it can be an enabler and it can be an accelerant. But it is very unusual for a technology to actually come in and solve some problems," says Sivak.

Sivak says that what does tend to solve problems are people and culture and the ability for people to adjust to new ideas and new systems and to push new ideas: "A lot of people associate this idea of innovation with technology, but we really try to focus on enabling people to see different possibilities, and where tools and technologies can come in to help enable those changes and accelerate those changes, then great, we are all for it."

2. Give people the freedom to experiment - Sivak defines innovation as a direct result of the freedom to experiment. He believes that if you can provide people with the freedom to run the tests, along with giving them the methodologies and the specific ideas and training around how to actually go about experimenting, then innovation will result. "The first problem we try to solve is how can we enable people to test out some ideas in a fail safe way and then figure out how to make something go from an idea to a functional prototype that will provide some data that indicates whether it is successful or not," says Sivak.

If innovation through experimentation is going to work, then organizations need to get comfortable with failure, something that Sivak says the federal government needs to get better at embracing: "You need to be able to say, look, we're going to try something and it might not work and that's okay, and we are going to learn from the things that didn't work and fold those back into something that does work.

One of the initiatives they have created is the HHS Idea Lab to allow teams from across the department to come up with solutions to problems that HHS is working on. Through the process of working together as teams who are competing for their idea to be scaled across the department, people are taking the lessons that they have learned throughout this mentorship and bringing it back to their day jobs and they are actually approaching their day jobs in completely different ways.

3. Fill the innovation gaps with external skillsets - The HHS department has 90,000 people that are all incredibly intelligent and possess great skills, but at the same time they don't have all the skills on the inside that they need in order to solve some of the most complex problems that they have. In order to continue to innovate, they have devised some initiatives to bring people in from the outside world on a time limited basis to help them solve some of the problems that they don't have the internal skillsets to do.

4. Get people to work together - Anybody who works in a large organization (and many in smaller sized organizations as well) has seen that you get silos of expertise, or behavior or program functionality that very rarely talk to each other.

Yet according to Sivak, "One of the things that we know from looking at the history of innovation and innovative thought is that new developments never come from the guy that has that eureka idea. All of these new ideas tend to come from groups of people working together, each of whom have different backgrounds, different ideas and different cultural histories."

These silos that exist prevent people from different backgrounds from working together. By getting people to work together in more effective and appropriate ways, organizations can actually get new ideas out on the table and try them and see what happens.

5. Focus on the people that embrace change - Sivak says that getting people to change (even those in government that are aiming toward retirement) is actual fairly simple. He says that if you were to graph the propensity of any individual to want to actually change the way they do something versus the number of people that are out there, you'll get a standard bell curve. On the left-hand side of that curve you're going to have people who really have zero desire or incentive to do anything differently and on the far right-hand side of that curve you'll have a number of people who are embracing it and ready to go. Sivak has found that by focusing on the people on the right-hand side of that curve and working with them to make them successful, that success then propagates down that adoption curve and allows them to actually engage with the people who you would never have thought would have been engaged in the past.

6. Lead by offering assistance (not with authority) - In order for leaders to ignite the desire to change even in the most change resistant bureaucratic environments, Sivak advises against going in and telling people how to do things, but rather to offer assistance to help them achieve the goals that they are trying to achieve. He says that even the most jaded, cynical, long-term government employee is not going to say they don't want to go and help all these people that they are there trying to help or implement a program that we are trying to implement.

Sivak says, "One of the things we have seen on a number of different occasions is where you will get some of these old folks that have been around for a while, and they will have younger people in their teams who are actually trying to push the envelope in interesting ways. And so we will work with those younger folks, and all of a sudden they will be delivering on things that these guys who have been around for a while never thought were possible. And all of a sudden they are like, wait a minute this is kind of cool. What else can we do?"

7. Leverage startups - A big external part of Sivak's job is working with startups and entrepreneurs, as well as big companies who are doing innovative things that have the potential to fundamentally reshape or disrupt Healthcare or Human Services ecosystems. His office is actually the place to come in HHS if you're doing something crazy that has significant potential, but it's difficult for you to get attention from anybody else. He offers these tips for pitching him:

Have courage, raise questions, and be solution-focused - Sivak parts with these closing words of wisdom:

You can watch the full interview with Bryan Sivak here. Please join me and Michael Krigsman every Friday at 3PM EST as we host CXOTalk - connecting with thought leaders and innovative executives who are pushing the boundaries within their companies and their fields.