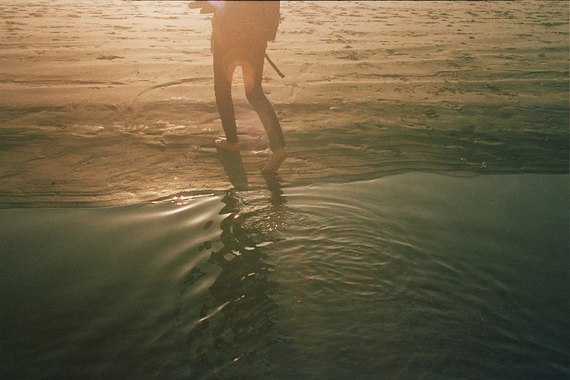 Date a girl who travels they said. Because she will be free and restless and follow her heart.

Date a girl who travels they said. Because she will have a mind that wanders faster than her feet.

Date a girl who travels they said, because she will stand out from the crowd. You will love her for the freedom that she breathes out and that you would like breathe in.

Date a girl who travels they said, but please, know that you will never tame her nor keep her.

Because she'll never sign her letters off with a "your truly" - but always with a "see you when I see you".

A girl who travels has learned how to dance barefoot. She's learned to place her toes in the sand and dance through rhythm, not through rehearsed footwork. She's learned to follow what she likes, not what she needs to like. She won't always go for what's conventional, and that's part of her. The relationships she'll need to form are far more different than you could imagine.

Her relationships aren't about security. They are about sincerity. She will want to find a person to share a rhythm with as much as you, but be careful not to step on each others feet, because it will always take two to tango.

She will always be alone in her mind. And so will you. But somewhere along the line, you may understand that you can share each other's loneliness. She won't need a saviour; she'll need an accompanier. And she'll need someone who lives that way too.

She will not always need to be told how impressive she is. Because she's worked hard on being where she is. But she will need someone to ask her about her dreams but also her favorite colors.

She will not always want to be impressed by you. She will want to feel reality from you. Because when she travels she knows that deep down she is escaping reality. So she'll want someone to give her hope and land back to the idea that reality isn't as bad as it seems in the end. And if she tells you she loves you - it is exactly because you give her that hope.

She is not trying to be something she's not. She's finding herself. And she'll expect you to do the same.

But sometimes we are so lonely that we are more ready to fall in love with the concept of a person than the person in itself. Some people are thirsty for life, while others are hungry for love - and a girl who travels will know that there have been people who have fallen in love with her for the wrong reasons. They were impressed by her before they even managed to get to know her for real.

Few people will understand that to love is like being able to select and read a good book. Some people will pick up a book in a store, look at the cover and fall in love with the title while making an idea about the content.

But other people know the true value of a book. They don't just stop at the title or the cover. They stop because...they wanted to read the content. The wanted to read each word, each sentence, each line, but most of all, what was in between the lines...

Because when you know that writing your own book is so difficult to begin with, the least you can do for someone else, is to try to read the pages of a person rather than skip through the chapters.

And a girl who travels will need someone that questions her, not too little, and not too much. She'll need someone to read her, but also really listen to her. Because she'll want to do the same. She'll want a person that shares an interest but at the same time stays genuine to who they are. Not drown in a puddle of narcissism. And not drown in a lake of fascination.

So that we don't just love the person for the image, idea or concept of them, but so that we can love them for every fantastically weird and twisted details that makes them up.

And that is why loving someone will always start with a loving friendship. Only those type of bonds - where honesty and vulnerably are put across - will be the most meaningful ones we will live. Because you will not want to possess them. You will want to celebrate them.

And once you've understood that people are like books. And that relationships are just concepts but not necessities. Than you will learn to love her the way you should.

A man or woman who travels in the end will never be kept. But if you understand that person well enough, they'll always be by your side. They might have forgotten where their home is in this world - but you might just make them feel like the closest thing to feeling at home. And while they'll be leaving country after country, this is the way you will never leave their heart.

Lauren Klarfeld is a freelance writer studying to be a life coach and currently writing a book, not on travel but on travellers. As a traveller herself, she roams country to country and hostel to hostel looking for interesting stories and people-but most of all quotes-to construct a portrait of the modern day traveller and the future traveller within us all. She has been collecting handwritten quotes from travellers since 2014 and are published online on Facebook and Instagram and is she is currently looking for a publisher to publish it as a book.

Read her most recent article about what coming home feels like here: "The Alice in Wonderland Effect : On coming Home"