As a personal shopper and IKEA furniture assembler on Taskrabbit, I am no stranger to purchasing and assembling the popular quasi-disposable-but-oddly-cheery furniture. Here are my conclusions, that I wish I'd known a long time ago.

IKEA is overwhelming, the outlets are often 300,000-400,000 sq. feet in size. Naturally, the best time to shop is when there's the smallest crowd, and that typically means mid week, and especially evening hours.

As far as timing the season, the most affordable method is to try to purchase items right after their popular season, respectively. For example, there are good buys in the beginning of January after the holidays on almost all items, or patio furniture would be cheapest after summer, and so forth.

Shop with at least one buddy if possible:

Items are extremely heavy at times, number SKUs on items need to be back-checked to go hunt down and retrieve, and a buddy can bring the car around during checkout to save the hike across the mall-style parking lot.

Sign up for the IKEA family card, which is free to do so. On a recent $800+ purchase for a client, it saved him $58, which is nothing to shake a Swedish stick.

There is also a designated discount section at all IKEAs, featuring returns, broken, and otherwise reduced-priced items. When you factor in that a lot of these items are already assembled, that too bears an additional savings of either your time and hassle, or paying someone to assemble. Years back I purchased the KLIPPAN Leather loveseat, normally for $500, for a mere $299, simply because there was a scratch in the back. Knowing perfectly well that the back of it was always going to be going against the wall anyway, I reveled in a $200 savings on a brand new item.

Have a budget in mind, and a list of what you will buy and stick to it:

Ikea just loves the idea of you and your significant other, parents, or whomever, to be languidly strolling through every last section as they nearly force you to do, loving the displays, and adding frivolous purchase to your list. Get a list together ahead of time online if possible, have a budget and stick to it.

Save time and temptation by ignoring the floor plan in IKEA, and looking for the narrow fire exit door, which offers a shortcut across the store. In fact, I often go into the store backwards to find what I want, avoiding the showroom as much as possible.

By the way, in the warehouse, two of those carts can be easily merged together to make a supercart. It feels cool anyway. Be sure to scoot down aisle going "weeeeeee."

Don't shop there at all:

No seriously, especially around September/moving time; Craigslist is ripe with already assembled IKEA pieces, like the dime-a-dozen BILLY bookcase, LACK coffee table, and many more. If you aren't too proud to have used furniture -- and you shouldn't be, there is serious savings in it -- then there is a big benefit to be had in having one less thing to assemble.

Lastly, if you do shop at IKEA, avoid the upsell services as the prices add up quickly. I'm talking about the temptation of paying to either ship or assemble your furniture, as it adds up fast. Instead, find a cheaper solution like paying someone off of TaskRabbit or Craigslist (just make sure they have a good rating), or enjoy assembling it yourself like a boss.

Building the pieces is often tedious, back-pain inducing work, and sometimes even near maddening. There are definitely some ways around all that, namely, caffeine and/or alcohol.

Alcohol: I enjoy at least a cold beer or glass of wine while assembling simple pieces, maybe watching TV or having friends over at the same time. Think basic pieces like dining room chairs, or the side tables.

Caffeine: For the sheer tedium of larger and sometimes confusing pieces like the MALM bed or HEMNES dresser, do caffiene up, and put on that music to break the monotony of it. (The IKEA family card gives you free coffee by the way.)

Enough about controlled substances, my better tip is to build yourself a table first if you don't have one, and from then on build all the furniture you can whilst standing up at your new workstation, as the bending over kills your back.

After the table, always assemble the bed first, in case you don't finish the pieces day one, you at least have your place to sleep that night.

You'd be surprised how much time it saves, if the moment you rip open the bags you sort all the pieces into like parts as pictured here: 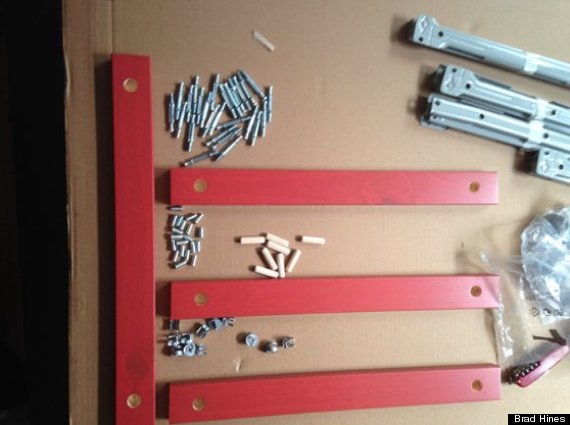 Another natural workflow tip is to not open every part bag if they are numbered. Don't open them until you need them (when bags are labeled 1, 2, 3 etc.).

The tools you really need:

Ignore the fact that IKEA "doesn't require tools" and keep with you at least:

You'd be shocked how much all of those actually need to be used.

Be careful with the power screwdriver, it can and will strip the dinky screws, but the time it saves incredible.

In the blueprints, pay particular attention to the direction a part is facing, often arbitrary seeming ways to attach a part, are backward or upside down if you didn't notice, say, a pre-drilled hollow; if you don't follow the picture precisely. Having to remove a part three-parts deep sucks, and sometimes can't even be done if it's nailed on.