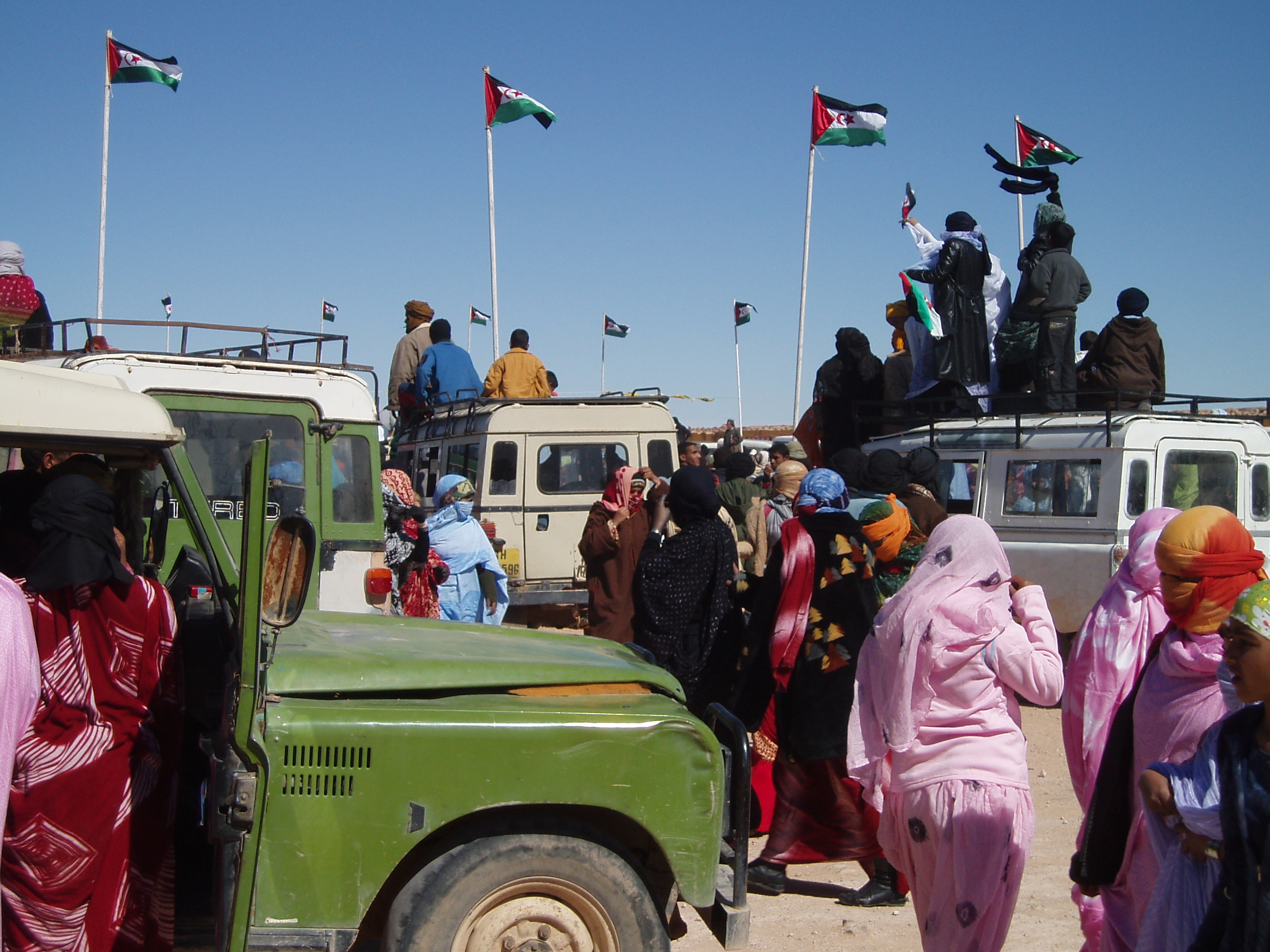 A gathering in the refugee camps of Western Sahara.

Recently, former U.S. Ambassador to Morocco Marc Ginsberg argued in the Huffington Post that Americans ought to "applaud" Morocco because "it is a challenge identifying a strong dependable, and extraordinarily supportive Arab ally in the chaos [of the region]." He gushed about the "privilege" of working with the Moroccans during his tenure as U.S. ambassador in Rabat, and praised the kingdom as a "worthy, historic, dependable ally." Perhaps worried that we hadn't quite got the point, he added that Morocco was a "shining Muslim star hovering above those stormy sands." Gosh.

This effusive praise laid the groundwork for Ginsberg's main argument: that the United States should not only allow Morocco to continue its illegal occupation of Western Sahara, but it should help to perpetuate the whole disgraceful enterprise.

Ginsberg conveniently omitted that no country in the world, including the United States, recognizes Moroccan sovereignty over Western Sahara. In 1975, the International Court of Justice rejected the notion of any ties of sovereignty between Morocco and Western Sahara. Ginsberg also ignores the brutality of Morocco's illegal occupation. Should we applaud the well-documented human rights abuses perpetrated against Sahrawis by Moroccan security forces? Should we applaud the total lack of press freedom in the kingdom, which saw a prominent Moroccan journalist recently arrested for the crime of acknowledging that talking about Western Sahara is a "red line" for the Moroccan media? Should we applaud when Freedom House rates Moroccan-occupied Western Sahara as "not free"? It is a sad reality that because Morocco cooperates with the West on counter-terrorism and other security issues, many countries look the other way when it comes to its illegal occupation of Western Sahara.

Ginsberg writes that "Moroccan King Mohammed VI has committed some $7 billion more over the next 10 years to facilitate economic growth for its southern lands." (The phrase 'southern lands' is a euphemism for Western Sahara.) He assures the reader that "[u]nder Morocco's responsible stewardship, the western Sahara region is achieving remarkable economic growth with a dynamic and pluralistic political culture, a thriving civil society." The benign sounding "development plan for the Southern Provinces" is actually a way to entrench Moroccan control over the territory, not to mention a major impediment to the UN process. Morocco uses every tool at its disposal to obstruct the political process on Western Sahara at the UN Security Council, while it simultaneously mounts a major push to change "facts on the ground" in the occupied territory.

Various foreign corporations and other organizations are complicit in this. Energy companies such as San Leon Energy and Kosmos Energy have signed oil exploration contracts with Morocco to drill in Western Sahara. The shadowy Monaco-based Crans Montana Forum regularly hosts conferences in the occupied city of Dakhla, claiming that it belongs to Morocco. Last year the Virgin Kitesurfing World Championship even hosted one of its world tour events in what it referred to as "Dakhla, Morocco." Imagine if someone put on a competition in the West Bank, and labeled the host city: "Ramallah, Israel"?

Morocco claims that it invests more in Western Sahara than it extracts through its illegal exploitation of the occupied territory's abundant natural resources, but much of this "investment" is put into the machinery of its oppressive police state. Further complicating matters are the demographics of the issue. In 1975, Moroccan King Hassan II coordinated the so-called "Green March", which saw hundreds of thousands of Moroccan civilians (with a military escort) cross the border into Western Sahara to seize control of the territory. With General Franco on his deathbed in Spain, the then-colonial power agreed to withdraw. The result is that the inhabitants of Western Sahara now include a large percentage of Moroccan settlers and their descendants. The indigenous Sahrawis are treated worse than second class citizens, while the lion's share of job opportunities and the other fruits of Moroccan "investment" go to the settler population.

Ginsberg claims that the aims of the Polisario Front - the internationally-recognized, legitimate political representatives of the people of Western Sahara - are to "create a jihadi-oriented failed state," and that the Saharawi refugees are held "captive in camps." This is nonsense. The Polisario is actually a valuable bulwark against extremism in the region. It is a liberation movement which seeks only the fulfilment of a UN promise for a process of self-determination as part of the UN-brokered peace settlement in 1991, which Morocco agreed to and signed. The Polisario declared the Sahrawi Arab Democratic Republic (SADR) in 1976, which has since been recognized by many countries. If Ginsberg wanted to find out what the Polisario actually wants, he could quite easily ask them. They have representatives in New York and Washington DC, and diplomats stationed all around the world. In fact, at the African Union, it is the Polisario's SADR that sits at the table as a full and founding member, while Morocco waits outside in the hallways, the only nation on the continent not to be in the room because of Africa's refusal to recognize Morocco's illegal occupation of Western Sahara.

Ginsberg might also consider talking to people suffering in the Tindouf refugee camps, rather than making wild claims about what is and is not in their best interests. Visitors from all over the world travel to the refugee camps for the annual FiSahara international film festival and other events. Going to Moroccan-occupied Western Sahara, on the other hand, is much more difficult. You will find that your Moroccan hosts consist of an omnipresent contingent of both secret and uniformed security forces. If you're a foreigner, you're quite likely to be expelled or refused entry. For Saharawis, the consequences are far more serious. Beatings, torture, and arbitrary detention are common. Political activism of any kind is strictly forbidden.

Mr. Ginsberg would have you applaud Morocco and its illegal occupation. Instead, we should applaud the people of Western Sahara, who after forty years of occupation are still following the peaceful path to liberation. All they ask is to be allowed to vote in a referendum that would determine their own political future. It is high time they were given that right.

Nick Scott is an an External Relations Officer at Independent Diplomat, a nonprofit diplomatic advisory group which advises the government of the Sahrawi Arab Democratic Republic. More information is available at the Department of Justice in Washington, DC.