I woke to the sound of loud voices, people shouting, and hurried movements. I was stiff from sleeping curled up in a tight ball (to keep warm) on a hard cot and felt hung-over from the Xanax I'd taken the night before to fall asleep after seeing a scorpion. But I felt elated to be alive, that I had survived the night alone intact, and that my bag was still strapped to my pant leg.

I unlocked my bag from my pants, stood up and stretched as I tried to make sense of all the activity going on outside. When I'd arrived 16 hours earlier, the whole place had been a deserted ghost town. I'd gone to sleep in abject, desolate silence. Morning, however, brought large groups of men in uniforms - soldiers I guess - yelling at (or to) one another (I couldn't say) and rushing in and out of buildings.

I'd arrived here by a boat driven by a large, grim, taciturn man who spoke no English. I'd met Boatman five hours earlier on the dock in Ouesso, where I'd arrived the night before after a long, bumpy, two-day drive from Brazzaville, the Republic of Congo's capital city.

After clearing immigration and paying the necessary bribes, my driver had walked me down to the dock, pointed to Boatman - who was siphoning gasoline from a large recycled container through a dirty yellow tube into the engine of a beat up, rusty tin can disguised as a motorized rowboat - and said dispassionately, "You go with him." 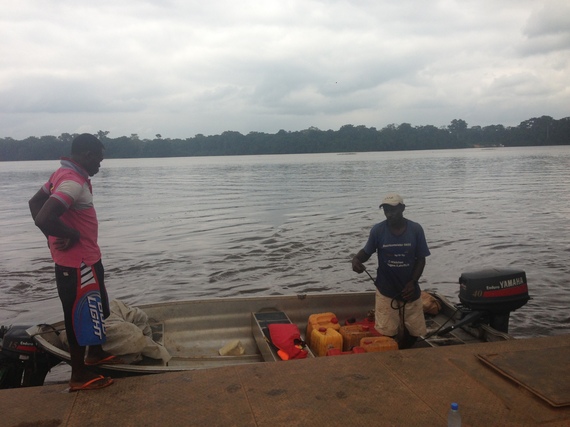 Several hours later I found myself alone with Boatman, our vessel sputtering up the Sangha River with Cameroon on my left, Republic of Congo on my right, en route, I'd hoped, to arrive at the Wildlife Conservation Society (WCS) camp in Bomassa. The camp is a kind of "weigh station" for scientists, researchers, and park authorities traveling into and out of Noubalé-Ndoki National Park. Here I was to meet a man named Bleck who would take me further into the forest to my final destination, Mondika Camp, to trek for lowland gorillas.

When Boatman pulled ashore, he indicated we'd reached camp, but I was dubious. Whatever faith I'd had in Boatman initially at the dock had evaporated a few hours into our trip when he'd pulled our boat ashore next to a small clearing in the woods and allowed a dozen or so men - some dressed as soldiers, all carrying guns - to try to shake me down for money. Luckily, my unfaltering naiveté and relative stupidity had gotten me out of that situation free and clear, and without a penny spent, but I'd decided Boatman could not be trusted.

When no one was there to meet my boat as expected, I asked Boatman to please wait a minute so I could go looking for someone else to confirm I was in the right place. I offered him $5 US to stay put, grabbed my bag and scampered up a short, steep hill away from the river. To Boatman's credit, I found a camp, but it was no bustling research compound. It looked more like Chernobyl. Like people had once been there, but fled in a hurry, leaving everything behind, and nature had taken its course. There were a number of small, non-descript buildings in various states of disrepair scattered about and among uncut grass and tall weeds with a single screened-in room in the center. There was not a soul in sight. By the time I realized no one was there and made my way back down to the boat, Boatman, and his boat, were gone.

Not to worry I told myself. I unlocked my cell phone to call for help, but my phone laughed back at me, "NO SIGNAL. You nincompoop." In that moment I thought to myself, "Hmm. Maybe I should have been better prepared before setting off from Ouesso? I don't know...looked at a map? Asked a few questions? Or called to confirm someone would be at the camp when I arrived...preferably Bleck?"

Oh well. Too late now. There was nothing I could do but dig in and problem solve.

But first, kittens! A gaggle of kittens had seemingly appeared out of nowhere, and I wasted no time dropping to the ground to play with them while simultaneously trying to get them to pose for a photo. I couldn't help but laugh at how quickly I could lose focus on the problem at hand.

As daylight receded into night, the magnitude of my situation started to became clear: I was alone, in the dark, in the middle of nowhere, somewhere in Congo, with no idea where I was, or if I was in the right place, with no food and only a half bottle of water. That I had no flashlight either seemed inconsequential in the scheme of things. I told myself not to worry, all I had to do was ride it out until morning, when it would be light again, and I could figure out what to do next.

I'm a big believer that everything always works out.

Which is precisely when I noticed a shadowy figure of a man in the distance. More hungry and curious than afraid, I started yelling, "¡Hola!!" (Always helpful in a country where everyone speaks French and Lingali.) I ran towards him, and by some miracle, the shadowy figure yelled "hola" back and walked towards me.

It turned out the man did not speak Spanish. He also didn't find it at all strange I was there by myself, which I took as a good sign I was probably in the right place - or not in a terribly wrong place. The man went into a building and returned with some crackers and water, pointed in the direction of a building and made the universally understood gesture for "sleep" and left. Things were looking up. 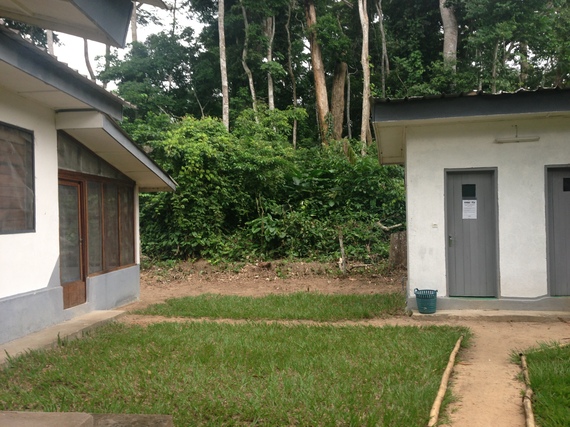 Inside the room the man had directed me to - which I imagine looked a lot like a Congolese jail - there was a cot, half a candle, a matchbook with a single match, and a scorpion. At age 46, I had NEVER lit a match before. It's a long story why, but suffice it to say, I'm terrified of fire, and lighting matches is making fire. Standing in the dark, the room illuminated by the moon alone, with scorpion to my right, I knew. It was time to face my life long fear, buck up and light the match. And I knew I had only one chance to get it right. For the first time all day, I was truly, deeply afraid.

I tried to relax and told myself I could do it. I also told the scorpion to please stay put. I would have to deal with him next. But first, I needed light. I took a deep breath and dragged the match across the wood strip. Whoosh! Fire! I was so proud of myself for lighting a match, I literally screamed aloud, "WOO! YAY!! I'm the bravest person in the world!" Small victories matter when traveling.

I carefully, but hurriedly, lit the candle (I couldn't wait to blow out the match!) and let wax drip down onto the floor to anchor it so the candle would stand upright without tipping over. What cruel irony it would be to set my room on fire! Oy! Next I told myself the scorpion was dead (he was not), and whisked him out of the room using my flip-flop, while screaming (from fear), "I'm sorry, Mr. Scorpion!"

Satisfied with my myriad accomplishments, I locked my bag to a fabric loop on my pants, popped my one remaining Xanax (there was NO way I was falling asleep otherwise, and I had way too much anxiety from the whole match/scorpion episode to stay awake), and prayed morning would come fast.

Since I'd slept fully clothed, within minutes of opening my eyes in the morning, I was wandering around camp looking for the elusive Bleck, who would take me to see the gorillas. No one seemed to notice me or even acknowledge I was there. It was so odd, particularly considering I was the only white female and the only person not wearing a uniform. To say I was conspicuous was putting it mildly, yet no one even glanced my way.

Until I started calling for Bleck.

Want to know how to get people's attention when you're in Africa? Start calling out to anyone and everyone, "Bleck! Bleck? Bleck!?" which you'll soon realize sounds an awful lot like you're calling out, "Black! Black? Black?!"

A large group of men standing a few feet from me, to whom I was previously invisible, stopped yelling at one another and starred over at me instead. One man walked over to me and asked - incredibly and strangely - in Spanish, if I was looking for Bleck. "Yes!" I responded, nearly bursting into tears. "Bleck's gone," he answered and then walked away.

This was what one might call a classic "good news, bad news" situation.

As least I finally knew I was in the right place! That I'd traveled 30 hours from New York, spent an entire day dealing with immigration and customs and paid hundreds of dollars in bribes in both the Democratic Republic of Congo and Republic of Congo for a five minute boat ride to cross the Congo River from one republic to the other, then spent another two and a half days driving from Brazzaville to Ouesso, followed by five hours in a tin can with a criminal on a different river, not to mention surviving an armed shakedown, and a scorpion, and lighting a match...so what if Bleck's GONE? It's not like he's the only one who can take me the last five hours hiking through the forest to Mondika Camp, where I'm meant to stay for the next week to go gorilla trekking for my 46th birthday? Right?

I walked over to the screen room in the center of camp, went inside and sat down. There were dozens and dozens of men racing around and shouting all over camp, but inside the screened room, it was quiet and empty. As I sat contemplating my next move, the screen door creaked open and a man walked in and said, "Hi Wendy. I'm Bleck. Sorry I'm late."