By Xavier Helgesen, CEO of Off.Grid:Electric 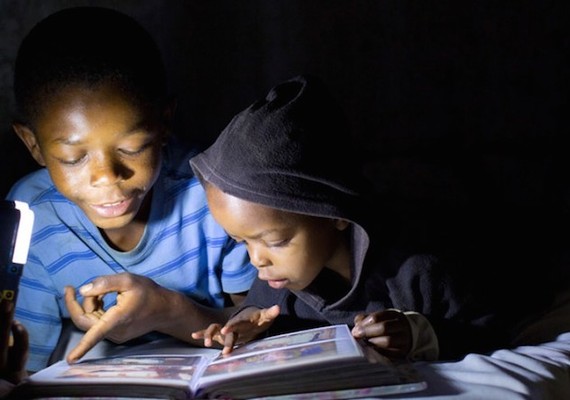 More people live without electricity today than when Edison powered his first light bulb - about 1.3 billion. They primarily burn kerosene for light, at a cost of over $25 billion annually. They walk miles to charge their mobile phones. They live disconnected from the modern information age without the ability to power a laptop or a TV.

Providing access to basic energy will fundamentally transform their lives, and underpins nearly every development goal.

The good news is that we know how to solve this problem: with distributed solar energy generation. The combination of solar, lithium batteries, and LEDs can produce light 300 times more cheaply than kerosene.

Their success mirrors the early days of the mobile phone revolution in Africa. While extending the electric grid costs $2,800 per household and therefore needs to be paid for through aid, small-scale solar can be deployed for less than five percent of this cost, on a commercial basis.

Venture capital investors have begun to see the opportunity and place bets. In 2014, more than $88 million was raised by distributed solar energy companies. Investors ranged from traditional venture investors like Vulcan Capital, social investors like LGT Venture Philanthropy, development finance institutions like IFC and OPIC, and even strategic investors like SolarCity and Schneider Electric.

But to achieve true scale, we need far more than venture capital. We need a public/private partnership on a global scale. This partnership needs to provide two things:

In Bangladesh and Tanzania, two recent initiatives have given us a proven template. Combining and replicating them on a global scale would catalyze an energy revolution.

In 2014, the Netherlands Development Organization (SNV), with funding from DFID through EnDev, launched a program to accelerate the solar market for the 86 percent of Tanzanians who lack electricity. The program, the first of its kind, provided results-based financing for companies selling solar products in one of Tanzania's most populous, yet underserved regions.

Companies received an incentive of up to 50 euros for selling or leasing a high quality solar energy system to a customer in the target area. They had to take all risks and incur all expenses until the time of sale. This put the risk of failure on the private companies, but provided a huge incentive for them expand and invest in a timely manner. It also meant public funding would only be applied to real, measurable results.

Within months, companies were racing to get into a region that had previously been neglected. They opened new branch offices, created over 100 new solar jobs, and have already directly benefitted 14,000 residents. With the program driving incredible results in proportion to the funds invested by donors, it is an example to the world of how to engage with the private sector to achieve a social goal.

Under this program, the incentive system is structured similarly to the feed-in tariffs that spurred the growth of the Western solar industry. Investors and companies can grow without distorting their business models or relying solely on subsidies. Results-based finance in the off-grid solar sector will dramatically accelerate additional investment and let the customers ultimately decide the best solution from among the providers.

Results-based finance can spur expansion by pre-paid solar companies, but to achieve true scale, these companies need patient and low-cost capital. For the last ten years a public/private partnership run by the government of Bangladesh and supported by the World Bank has brought distributed solar power to over three million rural households in Bangladesh. Known as the Infrastructure Development Company Limited (IDCOL), the program has provided subsidized debt to businesses that sell solar home systems, allowing them to provide financing to their customers.

When the program started 10 years ago, solar products were many times more expensive than they are today. Nevertheless, IDCOL has consistently shattered its targets, reaching its goal of a million households two years sooner than planned. As a result, Bangladesh has announced its goal to provide basic energy access to all homes by 2021.

To unlock the potential of distributed solar energy and solve humanity's energy crisis, we need a Global Solar Bank that can replicate the successes of SNV in Tanzania and IDCOL in Bangladesh.

The Bank would provide a program to any country interested in financing large-scale off-grid development. The program would have two components. First, results-based financing to companies willing to enter underserved markets, catalyzing new investment. Second, low-interest debt that could be passed on to those companies in order to provide financing to their customers.

The total capital required to create a Global Solar Bank would be only a small fraction of the cost of extending the grid. It would mean connecting off-grid customers to modern energy decades earlier than anticipated. Most important, it could fundamentally change the lives of more than a billion people.

Xavier Helgesen spoke at this year's Skoll World Forum on a panel titled How Fast Can Small Grow? The Case for Solar Power.