A few days ago my five-year-old daughter wanted me to weigh myself on some scales she had been playing with. I had no particular interest in this. Indeed, I had an interest in not doing it if you know what I mean!

However, she is beautiful, lovely and delightful to be with. So I was persuaded. When I did it I thought she might have been playing a lot with the scales because they were at least 10lbs, if not 15lbs, off where I had been when I last checked. I checked the scales were working and rechecked them again. Still the same. Then I realized I had been fastening my belt to the tightest position. I really had lost (at least) 10lbs over eight weeks -- without consciously trying.

The mystery, as an obsessive observer of why otherwise successful people fail to change, was how it had happened so effortlessly. After all, it's hard enough to do when I am consciously trying to lose the weight. This is not how change efforts usually go.

In 2004 I attended a Gartner Conference and was surrounded with the iconic Gartner Hype Cycle. It is a multi-stage tool the company uses to evaluate the maturity of a technology. It starts with a technology trigger, moves to the peak of inflated expectations, falls to the trough of disillusionment, rises to the slope of enlightenment, reaches a plateau of productivity and finally (in the Extended Hype Cycle) continues to the cliff of obsolescence when the technology has fully run it's course. 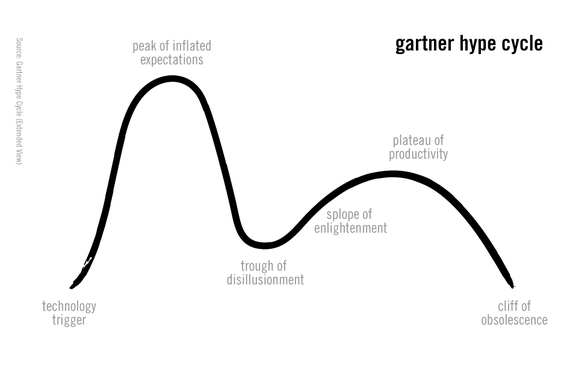 At the time I was introduced to the Gartner Hype Cycle I was helping to lead a change management initiative--which ultimately failed. What struck me was how identical the process had been to the Hype Cycle. There was a need to take things to the next level (the trigger), we had a big launch, complete with passionate speeches and an all-hands company event to communicate the new vision for the organization (the peak of inflated expectations), then nothing happened and people felt disappointed. One person summarized it by saying, "Oh, it's business as usual" (the trough of disillusionment). Trying to rescue the initiative we planned another big event almost exactly two months after the first. It generated some enthusiasm (a slope of enlightenment) but the effort stalled again (the plateau of productivity) and from that point on it slowly died (the cliff of obsolescence).

In the years since I have seen many similar attempts follow this same Hype Cycle. The results are so painfully predictable it's almost like watching a bad movie -- a second time.

It's similar to what Jim Collins calls "the doom loop" in Good to Great. According to Collins, in the companies that didn't make the shift to greatness they "launched new programs--often with great fanfare and hoopla aimed at 'motivating the troops'--only to see the programs fail to produce sustained results. They sought the single defining action, the grand program, the one killer innovation...they would push the flywheel in one direction, then stop, change course, and throw it in a new direction--and then they would stop, change course, and throw it into yet another direction. After years of lurching back and forth, the comparison companies failed to build sustained momentum and fell instead into what we cam to call the doom loop." It's true for organizational change efforts; it's true for people too.

Just think of how the average diet experience goes. We get on the scales and don't like what we see (trigger). So we start a big new push to make big change using a new fad diet that is all the rage (inflated expectations), fall back into our old bad habits (disillusionment), try a second big effort (slope and plateau) and ultimately give up on the new fangled diet (obsolescence). 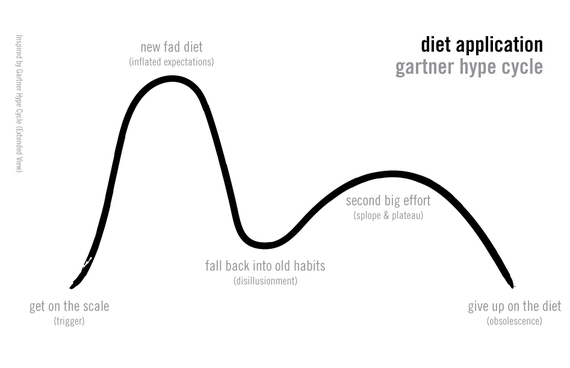 How to Start a Movement

Is there a better way? What I have learned is that if you really want to change you need to change something in your daily routine. In 1998, former Stanford professor and educator Henry B. Eyring said, "My experience has taught me this about how people and organizations improve: the best place to look is for small changes we could make in the things we do often. There is power in steadiness and repetition." That's worth memorizing (I thought so at the time anyway). In Leading the Revolution Gary Hamel describes the idea in six words: "Win small, win early, win often." If we get it right this leads to what Stephen R. Covey called "the upward spiral." There are so many people who have created graphics of this idea but one I like follows: 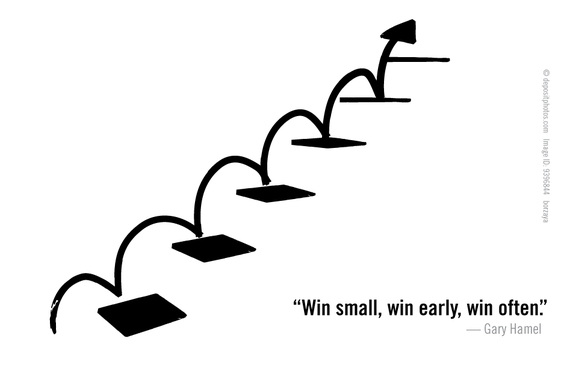 My successful "diet" effort followed this pattern. As I reflected on how it had happened I remembered a couple of months before deciding to write down everything I ate in my journal every day. It wasn't associated with a big diet goal. It took just 2 minutes to write it down. The first day I did it I noticed mid-bite I was eating something I wasn't even enjoying so I stopped. That happened multiple times. After a while I wasn't even writing it down every day but the tiny adjustment increased my awareness of what I was eating.

Even a tiny change in your regular routine has a huge cumulative effect over time. Everything else is unsustainable; nothing else is necessary.

There are two ways of thinking about change. The first is to go big to go small. Or in other words to try to force it. It's easy to see how we learn this model. After all, many of us have been rewarded for all-nighters in high school, university and early in our careers. We learn the way to make things happen -- and therefore the way to change things -- is to "Give it everything you have, every time." In this model of sheer effort and brute force we are a bit like Boxer the horse in George Orwell's Animal Farm whose answer to every setback was "I will work harder." Originally his motto worked and led to success. But over time his efforts exacerbated the very problems they were intended to improve.

The second way to think about change is to go small to go big. This model means making absolutely tiny adjustments to our daily routine so that execution becomes almost effortless. It is a counterintuitive approach. But it is through incredibly small changes in our daily schedule that real and lasting change happens overtime. (More about this in the video interview below).

And a classic video from Derek Sivers talk at TED (below) captures the idea of how small additions overtime can create a powerful change. One plus one plus one....until there is a breakthrough.