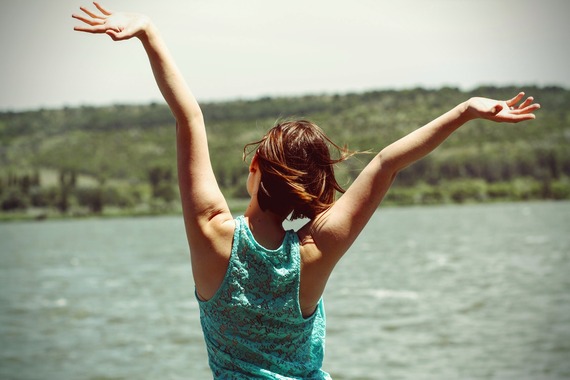 The process of losing weight can make the best of us want to stick up that white flag and stuff our faces with cake.

I know because I've been there (and I've also had my fair share of cake bingeing).

But after years of making it through some of the lowest moments of struggling with my weight and then, getting to a place where I feel comfortable in my own skin, I also know that making those changes happen doesn't have to be a frustrating, hair-pulling experience.

Here's what I did to put put the white flag down, and finally, start losing my excess weight without gaining it all back.

I know this one may sound counter-intuitive, but hear me out.

Here's the deal with the scale: Relying on it as a progress indicator can literally drive you to tears and panic if you watch those numbers like a hawk daily.

What I'd like you to do instead is to pick one piece of clothing that you cannot presently fit into, but want to wear with confidence and comfort, and use that as a means to gauge your progress. Pick something that's made from stiff fabric (like cotton or heavyweight denim) and doesn't stretch.

This way, you don't have to waste time being a slave to the number on your scale and as a result, will have more energy to focus on eating healthily and exercising with purpose to get to your goal.

I'm not saying that weighing yourself is bad for you (it's not)--seeing those numbers shift downwards significantly can be a huge motivator, but it's not going to happen overnight.

STRATEGY 2: Know Why You Want to Lose Weight

Here's one question I'd like you to answer before you move on: Why do you want to lose weight?

Consider these two different answers to the same question:

If you've guessed that Jason will be more likely to reach his goal, high five. Jason's goal is stronger than Sarah's because it's tied to a reason that's bigger than what he weighs and how he looks.

It's tied to his relationship with his kids. This makes it so much more powerful and meaningful than wanting to lose weight because his friends think he should (also, what his friends want have nothing to do with what he really wants).

Your turn: What's a weight-loss goal that will drive you forward instead of dragging you down?

STRATEGY 3: Let Go of Your Obsession With Clean Eating And Calorie Counting

The problem with trying to eat clean 100% of the time is that it isn't just unrealistic; it's also unhealthy.

And, counting your calories while you're out to dinner with friends and family is...well, I don't want you to be that person. Plus, over time, it can become a tedious, tiring chore.

What's worked for me is this: Listening to my body. I listen to what my gut is telling me (there's a reason why your gut is called your body's second brain) before, during and after a meal.

By doing this, I'm able to eat whatever I want without:

• having to look at a calorie counter,
• weighing my food, and
• feeling guilty about my food choices.

Even at times when I've had a little too much to eat (it happens, we're all human), I instinctively know how to get back to a state of balance the next meal, the next day or the next week.

If you'd like to get started on your journey of mindful eating for weight loss, my free, Lose 4 Pounds in 4 Weeks Without Going On A Diet email course can help.

When it comes to heavily-processed foods like donuts, cupcakes, French fries, pizza and ice-cream, the verdict is, without a doubt, in: The more of the stuff you eat, the more of it you crave for.

There's nothing wrong with you, and there a way to break your overeating habit: By replacing the foods that trigger the addictive pathways in your brain, with ones that don't. This means eating mostly whole, unprocessed foods like leafy greens, beans, whole grains, poultry, meat and seafood.

I'm not saying that you have to banish the sweets and pastries from your life forever (I don't plan to stop eating cupcakes and croissants any time soon)--just eat less of them, don't keep them in places where it's easy to go overboard (like say, your home).

As cliched as it sounds, this is the ONE thing that got me to stop eating to numb my emotions and start eating to nourish my body.

I realized that by choosing to use and abuse food (and in the process, loading a lot of stress on my body), I was also reinforcing my unhealthy, destructive eating habits, and the stronger they got, the worse I felt.

So what did I do? I started taking one healthy, nurturing step at a time, literally. I was so unfit that all I could do was walk. I fixed how I ate, one meal at a time--reducing my addictive food portions by a several spoonful from week to week and substituting them with foods that did my body good. I learned how to be kinder to myself. I took more time out for me so I could replace emotional eating with action-taking, and grow in mind instead of body.

I knew I was going slow, but that was OK. I wanted my new habits to stick, and they did.

This article originally appeared on michelelian.com

Self-care advocate. I show the stressed and anxious how to get healthier, leaner and calmer with more ease and less overwhelm.