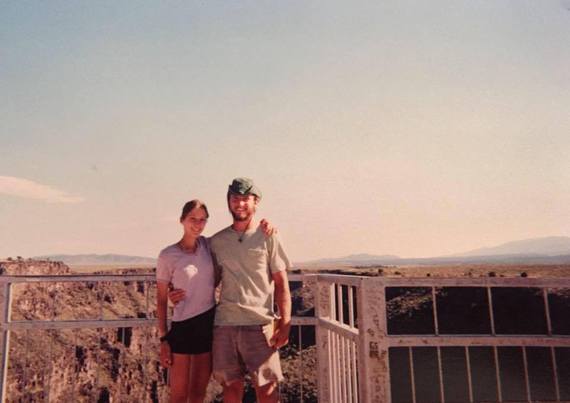 The sky outside the window where I sit sipping white wine and typing looks apathetic.

The outline of the trees is surrounded by a boring shade of white-grey instead of bright blue or a stack of neon as the sun tilts down the Western skyline.

I can imagine the fuchsia and fluorescent orange of the sky as we used to sit on the top of our favorite mountain in New Mexico when we were in college, before getting married; before having children.

We backpacked up with plastic wine glasses that had stems that unscrewed and then folded neatly into teeny tiny little domes, next to two bottles of white wine and a few other things we had decided upon for dinner fare.

I can still feel my pounding heart and heavy legs as we hiked the last switchback to the top -- the one that every single time I felt I could not get past.

My skin would later grow cold and clammy as the salty sweat evaporated; as the sun set lower, and the sky bruised purple and shades of citrus fruit. You would slowly and carefully unpack our dinner and camping gear, and I would act as your sous chef for all of it.

We would rip off hunks of food and talk. You would tell me your dreams. They usually involved something academic, which wasn't shocking since we sat on that mountaintop primarily because you were getting your first Master's degree at the school in the valley beneath it.

They also involved things that we would do together; landscapes that we would see; children we would meet -- and, even though you knew that you wanted to thrive as a thinker and an athlete, the dream you wanted most was a family, with me.

I'm able to write this now because I have a rare moment alone. You fell asleep putting our oldest child to bed.

I tip-toed in to check on your progress as you read with her, and saw you both on your backs in an eerily similar position, sound asleep. Our youngest daughter was already asleep on my own shoulder after nursing. I decided quickly to close the door upon your supine figures and place the baby gently in her crib. I'm now looking at her on the monitor, where she's resting in a strangely similar position to the one I hope to be in shortly.

And we got our wish.

We have two beautiful, kind-hearted, wild children. Sometimes, though, I wonder what happened to those two kids who sat on that moonlit mountain peak.

They're still here -- I'm positive of that.

They show up randomly, like when we crack horribly inappropriate jokes and when we kiss covertly as we cube zucchini in the kitchen.

They tickle my heart as I dream, and they still like riding with the moon roof wide open and the music spilling out the windows behind them and onto the hilly, country road.

They still like drinking wine underneath a starlit sky.

We sat on the front porch of our new house last weekend and I was surprised at the view of the stars.

I sat in the white rocking chair, in awe of the constellations for which I had no personal knowledge of a name -- I sat in awe of the man who sat next to me, tracing my thumb with his fingertips, telling me about his too muddy bike ride on the trail that he currently rides, and of how much I love him but often cannot easily show.

Love is funny when you have children.

Everyone thinks that their love will be different and I often hope for them that they might be right. More often than not, however, we equally struggle to maintain a connection that exists beyond poopy diapers, car seats and school.

Romance is stolen kisses after bedtime instead of obvious weekend romps. It's a favorite cut of meat picked up at the grocery store for the grill. It's a slightly hurried kiss good-bye in between breastfeeding and child school drop-off. It's work--and it's worth it.

But sometimes it feels like work and not love.

Yet the thing about marriage is that it does take work. Romance -- that's the easy part. Love -- that's fairly easy too. But loving someone day in and day out, with annoying personal habits and work and kids and life -- that's the kind of thing that can get old, fast.

But it doesn't get old, with you.

We sat underneath stars on red-colored rocks on a mountaintop in New Mexico. Now we sit underneath these same stars in matching rockers on a porch in the state where we grew up, together.

We used to lie on a blanket in my parents' front yard gazing up when we were teenagers -- our location seems to change, but, somehow, the stars and our own hearts remain constant.

My rapidly typing fingers slow and slow and slow, and I stop writing (because the baby begins to wake -- I can see her on the monitor sitting up and whimpering). I leave you to hold onto our daughter as she dreams.

I quickly undress and grab the baby and get into bed to nurse her back to sleep. I notice that the light has completely changed colors outside of the bedroom window, where I lie.

It's not black and dark out yet, but it isn't really light any longer either.

Instead, it's ready to close upon one full day while not quite ready to contemplate a new one--that crisp part of the night when it could be easy to pour another glass of wine and stay up talking for several more hours rather than go to bed.

I'm happy to go to bed, but I wish it was with you.

Loving you never gets old. It changes. It evolves. Sometimes it's more routine and work than romance and love, but that's part of what I want. Because it's true that nothing worthwhile comes easily. It's true that love should feel natural, but it's even more true that it requires a few trickles of blood -- and salty sweat and tears.

I take off my glasses and set them on the nightstand. I roll to my left side and wonder what I'll dream of.

The sky is now black. I force my eyes to shut; knowing in my heart that the struggles we currently experience are fleeting -- just like your thesis and that last sweaty switchback up to where we'd always put our tent.

It dawns on me -- on that contemplative space behind my closed eyelids -- that the white-grey sky wasn't boring or apathetic, but quiet and serene.

We want to be exposed to the quickly beating hearts, but hop over the tiring switchbacks that make them pump.

The best part of backpacking with you was that our hearts would labor together. Salty sweat would drip down both of our foreheads, and then simultaneously, similarly we would share the space afterward when everything was calm again.

And right now might be pureeing apples for the baby and shuttling another kid to school, and tag-teaming so that we can both get workouts in that day, but I wouldn't want to live my life with anyone else and I wouldn't want my life to be any different.

I love you fuchsia.

I love you florescent orange, neon blue and shades of purple and grey.

I love you evening luminaries. I love you mornings when the sky decides to dump rain.

And I know that when the stars are covered up with clouds, that they're still there, shining brightly and beautifully -- it's just that they're temporarily hidden from our view.

I'm just alright with the white-grey, sunset heartbeats in between the neon fuchsia passion.

More:
weddingsLove romanceLove & SexLove and Relationships
Newsletter Sign Up
A weekly guide to improving all of the relationships in your life
Subscribe to HuffPost’s relationships email
Successfully Subscribed!
Realness delivered to your inbox