Sean did not see who I was talking about. "The jogger in the red shorts?" he asked as I paused to readjust my crooked flipflop.

"No, dummy," I pointed directly at a man wearing dirt-soaked jeans and an oversized winter coat. His flowing white hair masked his face, and a gritty hand rested on the pay phone he was using as a urinal, "That one, that's my boyfriend."

"Oh gross, Marina," Sean said while scrunching up his nose. He turned his gaze to the attractive jogger in the red shorts, "If that's your boyfriend, then Mr. Jogger is my boyfriend."

Sean and I were wandering back from a spontaneous lunch. As the breadwinner of the apartment, Sean had offered to take me out to eat, and as the unpaid blogger of the apartment, I had decided to take him up on it. After two Bloody Mary's I was in full-blown, "That's my boyfriend" game mode.

I play this game when I am drinking. I find the most absurd looking man or woman and whisper, "That's my boyfriend" to the nearest person with ears. No one gets it. I love it.

My real boyfriend lives in a distant land where things like snow and storms happen. LA readers, that's when white stuff or wet stuff falls from the sky and it feels like the inside of a freezer. Whenever people find out I am in a long distance relationship they always say the same things; a mixture of, "How does that work?" "Why?" and "What's your plan?" I usually answer "I don't know" to all three. 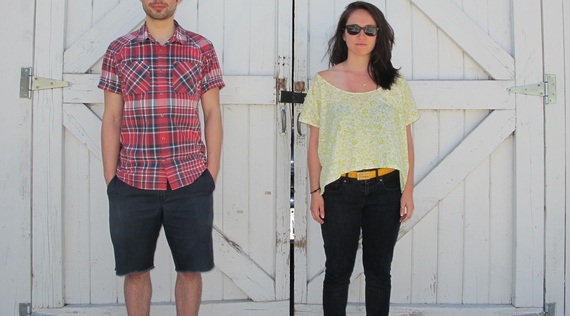 We met when I was living with my parents in the suburbs for a few months. I needed a place in the city to crash, he was cute and had a bed -- I am pretty sure I saw this at the beginning of a Romantic Comedy once. Anyway, the bed turned into drinks, drinks to dinner, dinner to dating. One night after a lovely nightcap, where we hid in a corner of the bar, I decided to ruin the mood.

"So I'm like your rebound, right?" I prodded, searching for more information about the five-year relationship he had just ended.

He was too smart and too good to take the bait. "You are a person I enjoy spending my time with."

What were we, 40-year-olds? Where was the drama? Where were the cryptic texts? Where was the ghosting? After spending a few years in New York City I wasn't used to this caliber of man: the Midwestern Man. Not knowing how to react to his statement I raised my drink for a toast, "I am the rebound and you are the fling. Cheers!" Our glasses clinked as my straw shot towards his straw.

When I relayed the conversation to our mutual best friend, Kevin, he rolled his eyes so far back into his head I thought they fell in. "Why do you like to ruin good things?" He genuinely asked.

The last thing the Fling said to me before I moved was, "I love you." We were at a train station waiting for the train he takes to work. It pulled up, he kissed me goodbye, turned towards the train and then confidently turned back. He made sure I was looking right at him and then he said it: I love you. No mistakes, no mumbling, no alcohol. That's how the Midwestern Man does it, I suppose. Then he was on a train and I was on a plane and we didn't live in the same state anymore.

On most days I want to smash my face into his, until our teeth tangle up and we have to breathe each other's air. So I guess, then, I love him too.

I actually kind of like the distance. Why? Well, for starters: I shave my legs once a month -- once every two months if I am lucky. I always have someone to talk to when looking for my car (I lose it a lot). I have had time to pave my own way in my new city. I get to flirt without hurting anyones feelings. I like writing letters, even more so when there's an excuse (especially a hot excuse) to do so. I love getting mail and having airport reunions. And it's all making our relationship stronger, right?

I mean, there are so many things I can say to convince myself that this is fun and working out.

Last week my friend Greg asked why we were doing this to ourselves. I thought back to one afternoon when the Fling and I went out for breakfast. We each ordered a Bloody Mary when a man with a bushy mustache and ponytail walked into the restaurant.

"That's my boyfriend," I said nodding my head toward the guy at the door.

"Oh, no" the Fling said, not skipping a beat, "is this awkward for you? Should I leave?" And I didn't want him to. Ever.

Marina V. Shifrin is a journalist turned humorist. Her favorite thing to do is write, but she also really likes to dance. She can occasionally be spotted nervously telling jokes in bars and clubs. Keep up with Marina on Twitter or on her blog.